Each year, when spring comes around, in East Texas, the Tyler Azalea and Spring Flower Trail turn into a beautiful showcase of stunning scents and amazing colors. When you either take a drive or a walk through the trail that stretches over 10 miles, there is plenty of natural wonders to marvel at in this idyllic part of Texas.

Brief History of the Azalea Trail

It was in 1929 that the trail was first introduced in Tyler by Maurice Shamburger. Mr. Shamburger invested in numerous azaleas that he had transported from Georgie in a boxcar to fill his gardens at Lindsey Lane. Once he had completed work on his garden, he worked in collaboration with other residents in Tyler to encourage the species to spread as much as it could. It was as a result of this effort that was responsible for many of the plots of azaleas that are still thriving to this day.

The Original Azalea Trail is Established

In 1960, the many gardens and blooms across Tyler, Texas, had become such a talking point that the Chamber of Commerce for the city decided to devise a specific route people could follow to experience them. Originally, this stretched for 5 miles and included approximately 60 homes. Nowadays, the trail is explored annually by more than 100,000 people.

A further development was the Azalea National Historic District in 2003 and has the distinction of being listed in the National Register of Historic Places. This includes more than 950 houses that were built during a time covering the turn of the last century to halfway through the 1900s. If you visit you will see many houses that were constructed during the 30s when the people of Tyler were living prosperously due to the oil growth in the local area.

Specific Details About the Trail

The trail is divided up into two official routes – the Lindsey Trail and the Dobbs Trail. GreenerAcresLawnCare.com takes care of many of the pristine and lovely gardens dotted around the city and throughout the two trails. The addition of the Dobbs Trail came about so that other homes not included in the original Lindsey Trail could be showcased due to their pretty gardens. You can either take the trails by car or by foot and some markers direct you from one point to another. Both trails begin at the same spot – Tyler Convention and Visitors Bureau, but you can start and end the trail wherever you want.

Who are the Azalea Belles?

Another important thing you need to know about the trail is the Azaleas Belles. You will hear a lot about these during the Azalea and Spring Flower Trail. The Azalea Belles are sophomore and freshman students from the local high schools who dress in full antebellum gowns and stand outside each garden on the trail, in groups of 2 and 3, for photographs with stunning azaleas and other types of spring flowers behind them. They are also there at the opening ceremony of the trail. 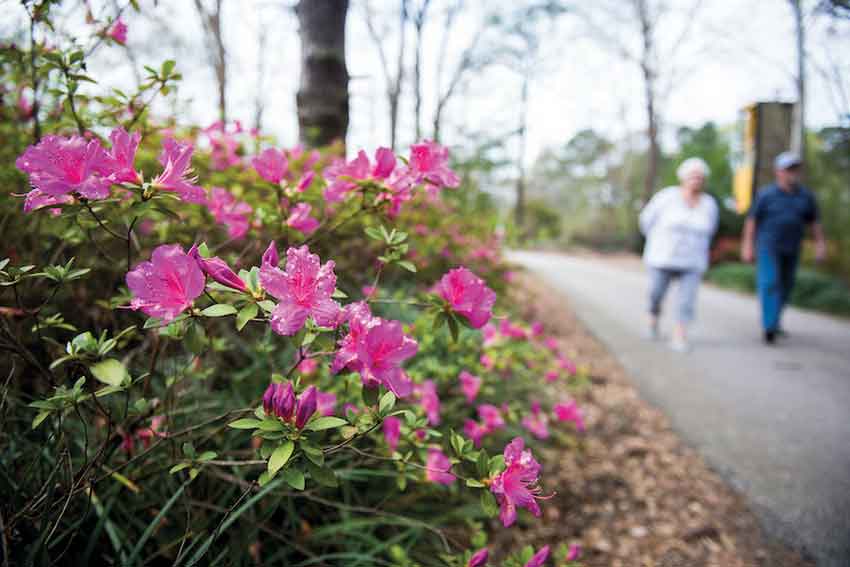 As the event is a big deal in the calendar for Tyler and its people, there are a variety of other things happening at the same time, such as special showcases and exhibitions at the Rose City Artisans and Flowers Market, the Annual Azaleas Quilt Show, and Azaleas Trail Arts and Crafts Fair and much more.

Whether you are a keen gardener with a particular soft spot for azaleas and other spring flowers, or love visiting historic and heritage properties, there is much for you to see and do at the Azaleas and Spring Flower Trail in Tyler.