Just before its 60th birthday in 2019, the University of Alberta Botanic Garden received a gift that elevated its stature as one of Canada’s premier educational and conservation plant repositories. 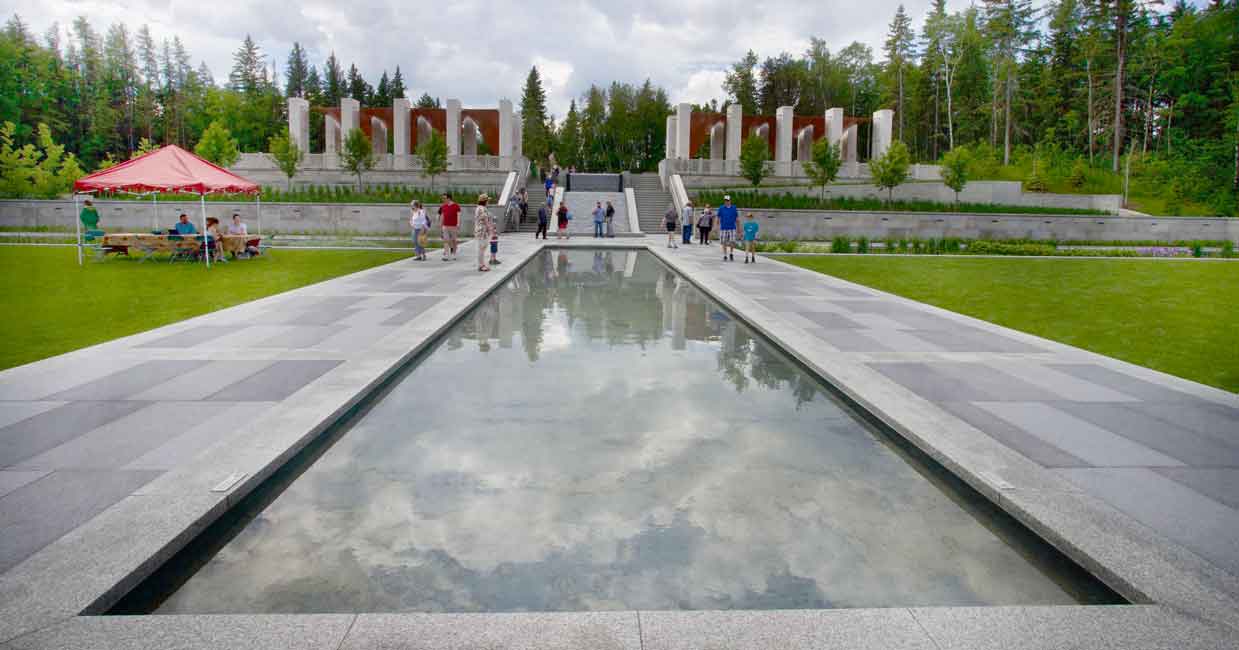 The Aga Khan is a spiritual leader of the world’s 15 million Shia Ismaili Muslims. As such, he is called upon to improve the quality of the community in which he lives. The Alberta garden is one of 11 gardens around the world that Aga Khan Trust for Culture has built or restored. It has the distinction of being the most northern as well.

Highlights of the Edmonton Botanical Garden

Among the highlights are 12 water features, fruit orchards, and more than 25,000 trees, shrubs, perennials, and other plants. The rose garden celebrates the wild rose, the official flower of Alberta. Tip: While June is a lovely time for roses and peonies in much of the U.S., they are still not in bloom in Edmonton. A better time would be July to catch those blossoms.

But long before the Aga Khan Garden was dedicated in October 2018, the University of Alberta Botanic Garden was already a destination for those who appreciate the delicate balance of nature in this northern climate. Called “a garden within a forest,” the Botanic Garden is an 80-acre (32 hectares) garden surrounded by 160 acres (64 hectares) of forests, meadows, and wetlands.

Located in Zone 2-3, the plants that thrive in the Edmonton region include Martagon and Asiatic lilies, roses such as the Alexander McKenzie and John Cabot, as well as lilacs galore. Walking paths to either side of the Aga Khan Garden are lined with massive French lilacs, requiring visitors to stop every few steps for another deep breath.

In contrast to the concrete, stone, and geometric patterns of the Aga Khan Garden, the Patrick Seymore Alpine Garden seems most natural in this colder climate. 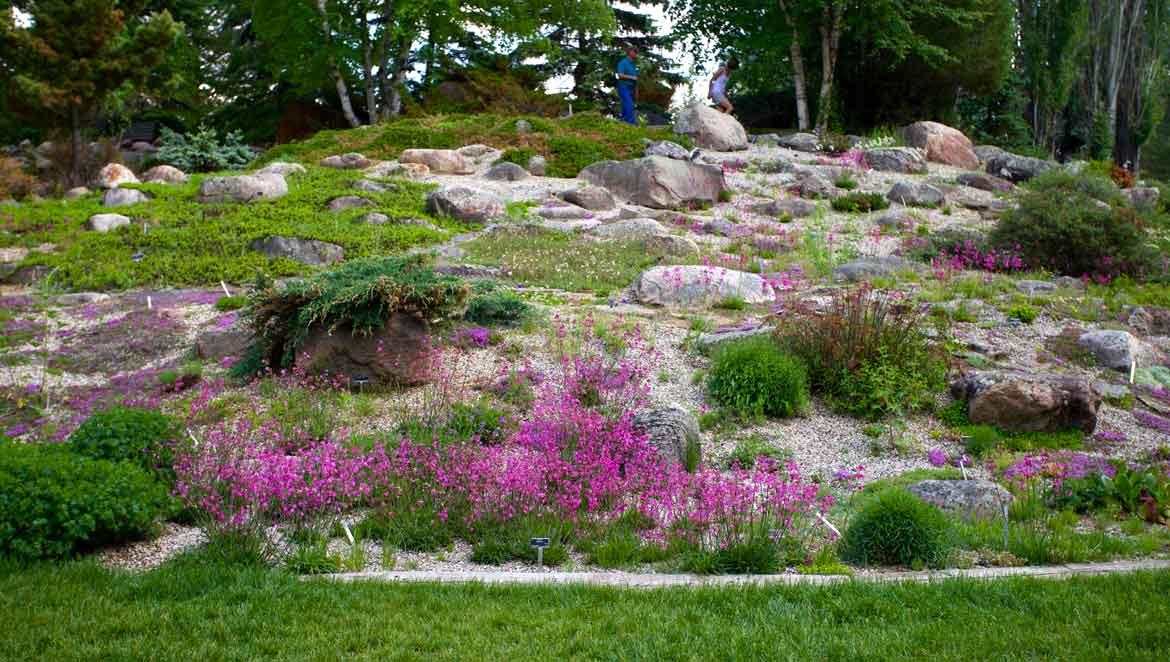 The largest alpine garden in North America, this five-acre (2 hectares) garden is accessed by delicate pebble and stone covered paths, weaving in and between patches of Alberta wild roses, reblooming bearded irises, and primula.

Flowering plum, mugo pine, and crabapple trees highlight spring and summer greenery of the Kurimoto Japanese Garden. Autumn is a blaze of color along the pathway of tamarack (Larix laricina), a coniferous tree that blazes yellow in September and October before losing its needles. This is one of the few coniferous trees that loses its needles annually.

Tea ceremonies in the Japanese Garden are among the most popular events at the University of Alberta Botanic Garden and sell out very quickly. Tickets must be purchased through the Matsukaze Chanoyu Association, which coordinates the monthly events.

A unique feature of this Botanic Garden is the Indigenous Peoples Garden. Designed with the input of Cree elder Luke Chalifoux in 1980, this highlights wild plants that are used in medicinal treatments and ceremonial programs of the Indigenous People of Alberta. Medicine walks through the garden highlight plants such as the bunchberry (Cornus canadensis), a low growing forest plant with white flowers and bright red berries. It has been used as an analgesic and contains antibiotic, antiseptic, and anti-inflammatory properties. Watch the calendar of events on the website for special programming by Indigenous People in this garden.

The garden closes in November and does not reopen until May except for the holiday Luminaria in December. For more information on hours, programs, and other events, visit the University of Alberta Botanic Garden website.

The Patio Café has limited service and can get quite busy. Therefore, if you would like to enjoy lunch at the University of Alberta Botanic Garden, consider purchasing a picnic box from them. 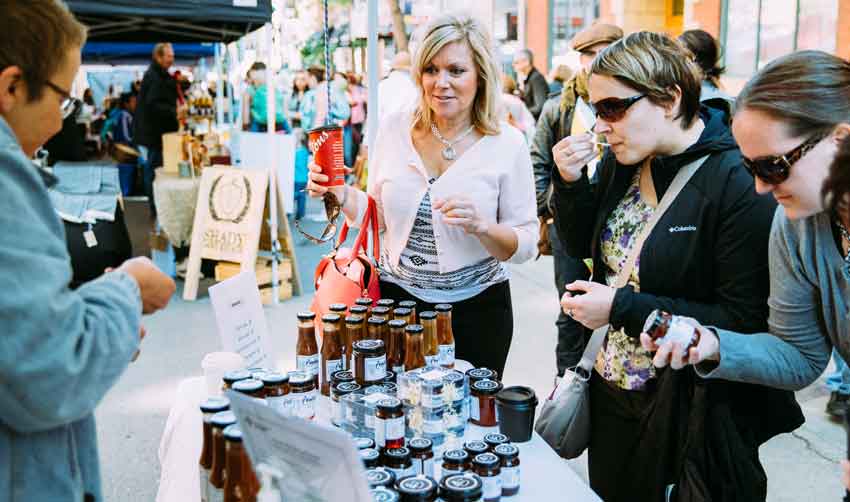 Edmonton’s Farmers Market downtown is open year-round on Saturdays and Sundays with lots of prepared food as well as fresh treats.

The University of Alberta Botanic Garden is located about 15 miles outside of the city, not far from the international airport. You will need a private vehicle to access the garden because public transportation is not an option. Downtown Edmonton has many hotel options, including a number that are walkable to the main attractions of the city.

As you fly into or depart from the Edmonton International Airport, take time to appreciate the Living Wall, a 1,420 square foot vertical green space with 8,000 plants. A part of the LEED certification efforts of EIA, the Living Wall is believed to be the only one of its kind in an airport anywhere in the world. Make an effort to locate some of the larger plants that include an Octopus Tree (Schefflera actinophylla) from Papua New Guinea, Lacy Tree Philodendron (Philodendron bipinnatifidum) from Brazil, Swiss Cheese Plant (Monstera deliciosa) from Central America, and a Staghorn Fern (Platycerium bifurcatum) from Indonesia.

A travel writer from Kansas City, Missouri, Diana Lambdin Meyer is an award-winning member of the Society of American Travel Writers along with her husband and photographer Bruce who enjoy visiting gardens in their travels around the world.