Some cities have perfect summer weather. Vancouver in Canada is one of them. The temps rarely rise above the seventies and the days are sunny with low humidity and bright blue skies. People and plants love it. 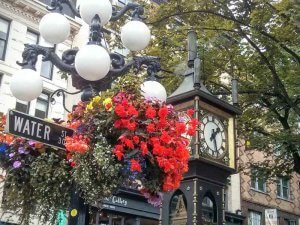 It seems every yard, business, sidewalk and street median is lined with flowers. Even the balconies, light poles and rooftops overflow with hanging containers filled with lush plantings. Is everyone a gardener here? And in the rainy season,  Vancouver’s gardens are havens for walks and respite.

The city has many public gardens to explore; the VanDusen Botanical Garden, the Queen Elizabeth Park quarry gardens, the gardens on the campus of the University of British Columbia, plus the Stanley Park gardens and the Dr. Sun Yat-Sen Classical Chinese Garden.

The University of British Columbia Gardens

Most public universities that teach horticulture tend to have a botanical garden, but at the University of British Columbia (UBC) there are three noteworthy gardens to visit. 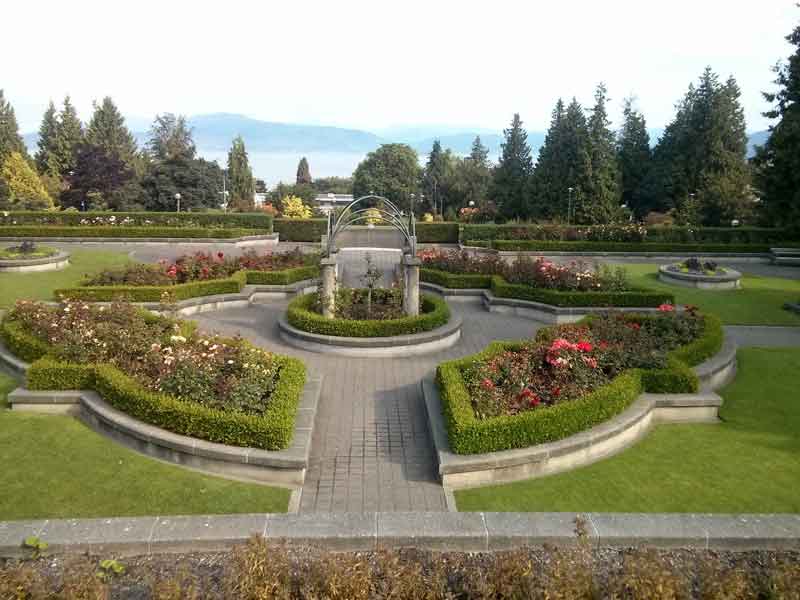 The iconic and probably most photographed spot on campus is the Rose Garden. Sited on top of the parking garage, the rooftop Rose Garden is the perfect spot to sit and enjoy the view of English Bay and the north shore mountains, while also enjoying the several dozen species of roses.

The Nitobe Memorial Garden near the southern edge of campus is considered one of best traditional Japanese gardens outside of Japan. 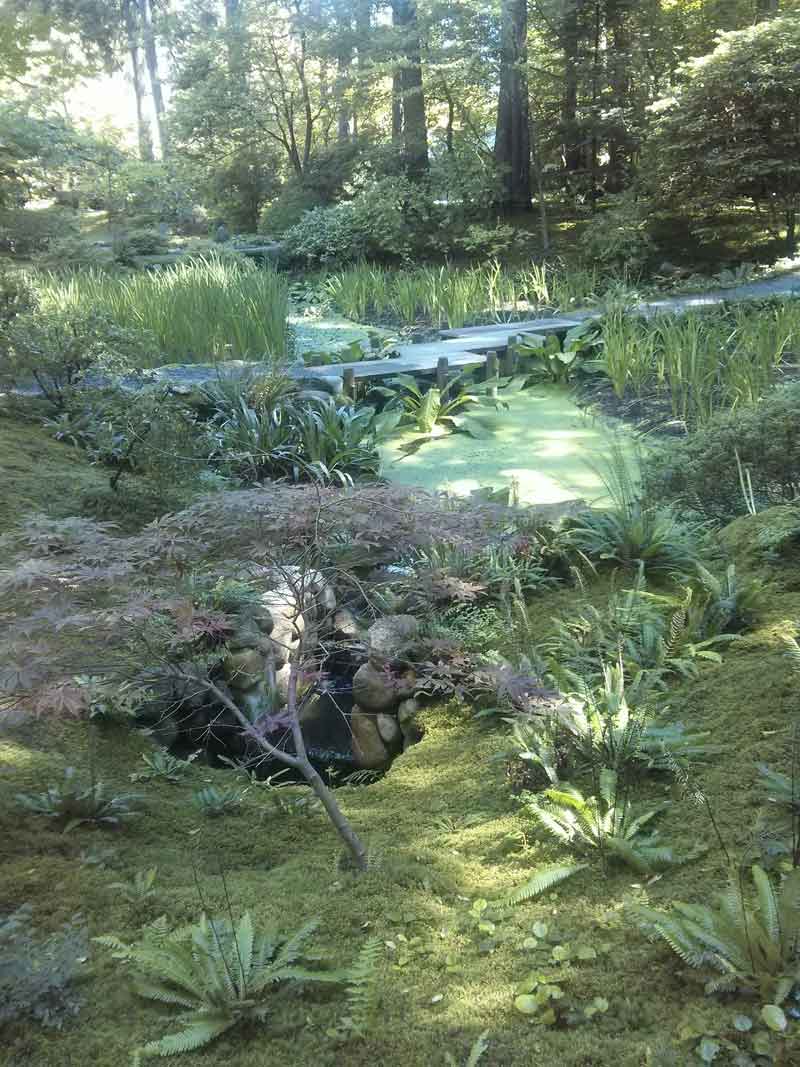 Behind a wall of stucco and stone, the garden is a tranquil oasis away from the bustle of the campus. Moss covered lawn, azaleas, rhododendrons, ferns, and Japanese maples are meticulously placed to create the framework of this Zen garden, which is also adorned with traditional Japanese elements of lanterns, bridges, and bamboo fences. A small stream winds throughout. The back of the garden has a teahouse used by the Urasenke School of Tea. There is no plant signage, but that’s not the purpose of this garden. It’s a place to quiet your spirit and nourish your soul. Don’t rush through or you’ll miss the purpose of this place.

On the opposite end of campus is the UBC Botanical Garden, which is divided into two sections. A tunnel under a campus road connects the two. 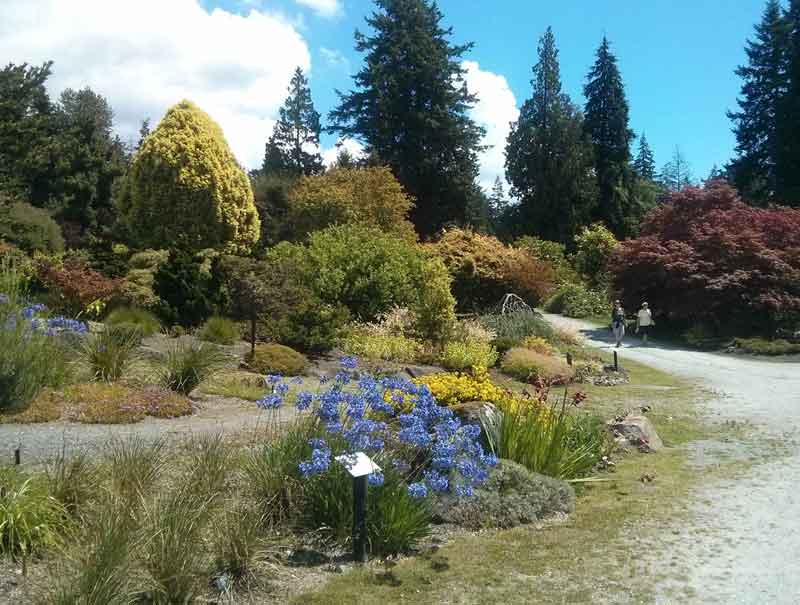 This is a massive garden so plan to spend considerable time here. Within steps of the entrance is the Asian garden with a collection of rhododendrons. It’s more forest than garden, but a serene starting point of your tour. At the far end of the Asian garden is the Greenheart TreeWalk (separate fee) where you can climb into the forest canopy and walk along a series of elevated platforms for amazing views. 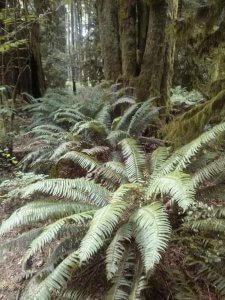 Highlights of the North Gardens include the Physic Garden enclosed by a circular yew hedge and filled with medicinal plants and signage on the ailments treated. The Food Garden is a living demonstration site with varieties and techniques for home gardens. The Alpine Garden is a mix of sun and shady varieties from around the world. There is even a Carolinian Forest showcasing the trees and shrubs native to eastern North America.

While on campus, you’ll want to spend time at the Beatty Biodiversity Museum. Among its collections is a herbarium, the largest in Western Canada, with over 650,000 specimens of everything from ferns and conifers to fungi and lichens.

On the edge of campus separating the university from the city is the Pacific Spirit Park. Take time for a stroll through this lush rain forest.

The city’s Queen Elizabeth Park has two quarry gardens made from the remnants of an old rock quarry. 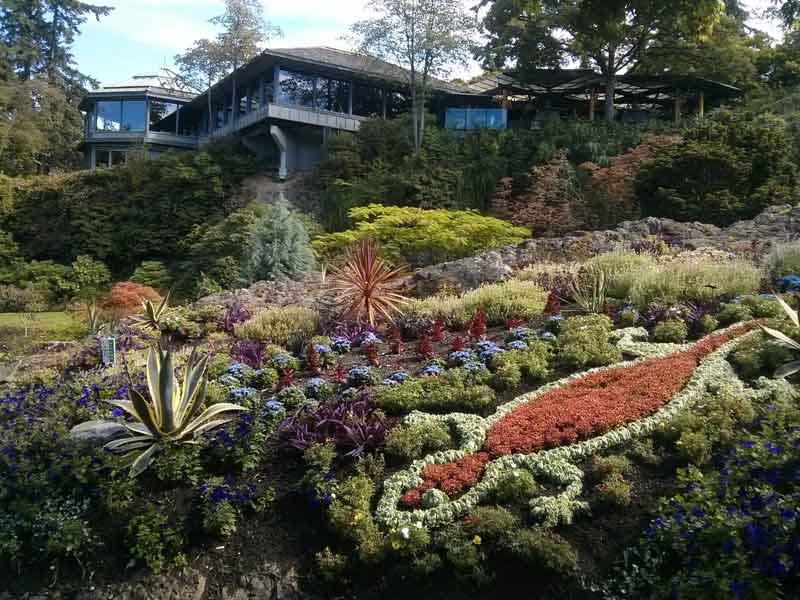 The park is the highest point in Vancouver with great views of the downtown. The main quarry garden is a stunning display of annuals, perennials, shrubs, conifers and trees, giving you a similar experience to the Butchart Gardens on Vancouver Island. You need to descend stairs into the garden, but once there the paths are level and paved. The north quarry garden has mostly xeric plants and a more Asian design. The park also has the Bloedel Conservatory with tropical and desert plants, plus a rose garden, Henry Moore sculptures and even lawn bowling.

You could spend a day at the city’s horticultural gem – the VanDusen Botanical Garden. If you only have an hour or two, the garden has a highlights map. 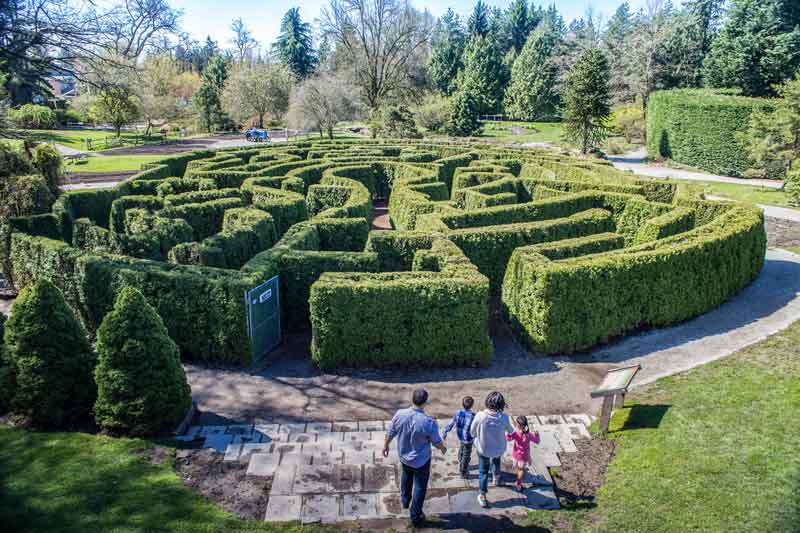 A grand lake greets you at the plaza entrance, with level paths radiating out in both directions. Take the left path for a walk through the Grotto with its stone boulder walls and natural branches on the top. Upon exiting the tunnel you’ll be rewarded with masses of heather in a Scottish garden. A side path takes you to a gazebo overlooking the lake. A conifer grove towers above the area near the Sino-Himalyan garden. The Fern Dell has dozens of specimens, including an unusual Tasmanian tree fern. Near the Korean Pavilion are plants native to the Asian country. All ages enjoy the Elizabethan Maze at the far end of the garden. Designed in a circular layout with 3,000 pyramidal cedars, the multiple path options through the maze entertain those who dare to enter. There is an observation terrace near the Monkey Puzzle tree if you prefer to watch rather than experience the maze. Other don’t miss gardens include the formal rose garden, the Laburnum Walk in spring and its spectacular display of yellow blooms, the Canadian Heritage garden, plus a collection of gardens from the Southern Hemisphere. The garden also has two dining spots, plus a great gift shop. The Festival of Lights in December turns the garden into a magical holiday wonderland.

The buzz in downtown Vancouver is at the Fairmont Waterfront Hotel. The hotel’s 3rd floor rooftop terrace is home to two gardens plus bee hives, and is open to both guests and the public to stroll and enjoy. 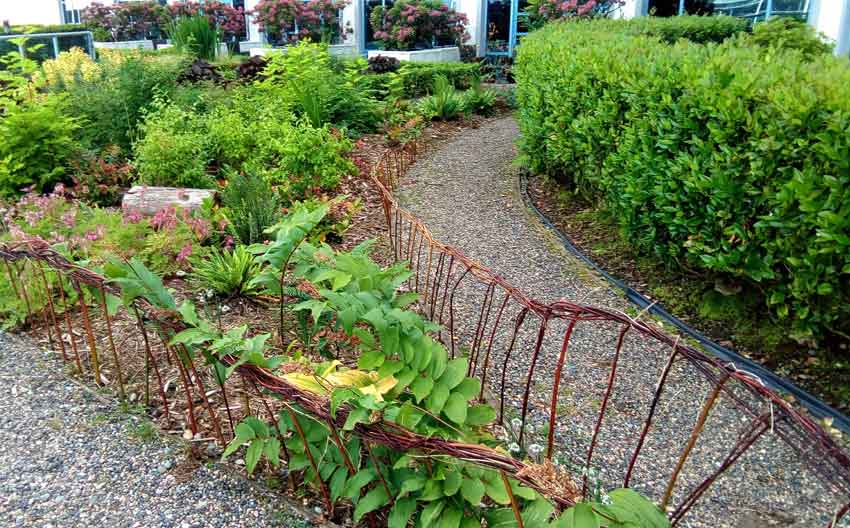 When you enter the rooftop (via the lobby elevator), you will see a garden filled with indigenous plants native to nearby Stanley Park. Plants include snowberry, mock orange, salmonberry, deer fern, salal, mock orange, Oregon grape, plus bleeding heart and Solomon seal. It’s a lovely stroll for an up close view of the plants you’ll see throughout this region of British Columbia.

The other rooftop garden is the largest and focuses on edibles, herbs and perennials, many of which are used in the hotel’s restaurants. When this garden was installed in 1995, it was one of Vancouver’s first green roofs. Today, the 2,000-plus square foot garden has 11 beds and over 60 varieties of herbs, plus vegetables and even a small orchard. Fragrant rosemary, lavender, basil, mint, bay, and sage are some of the herbs grown here. 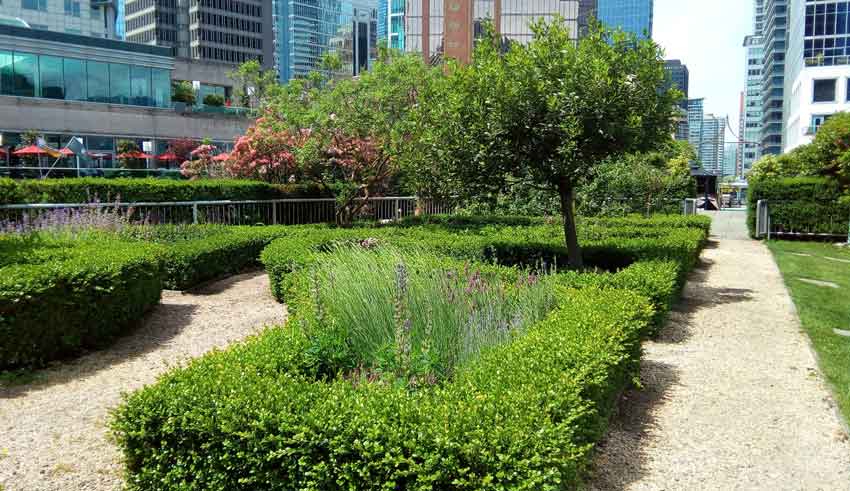 The fruits and vegetable include, garlic, rainbow chard, leeks, tomatoes, lettuces, carrots, peppers, green onions, shallots, strawberries, and even apples. The garden was designated a Certified Wildlife Friendly Habitat by the Canadian Wildllife Federation in 2016.

The stars of the garden are the beehives with some 250,000 bees on-site in the hotel’s four hives. These bees buzz about over 12 square miles to make honey from some 60 different types of plants found in the area. 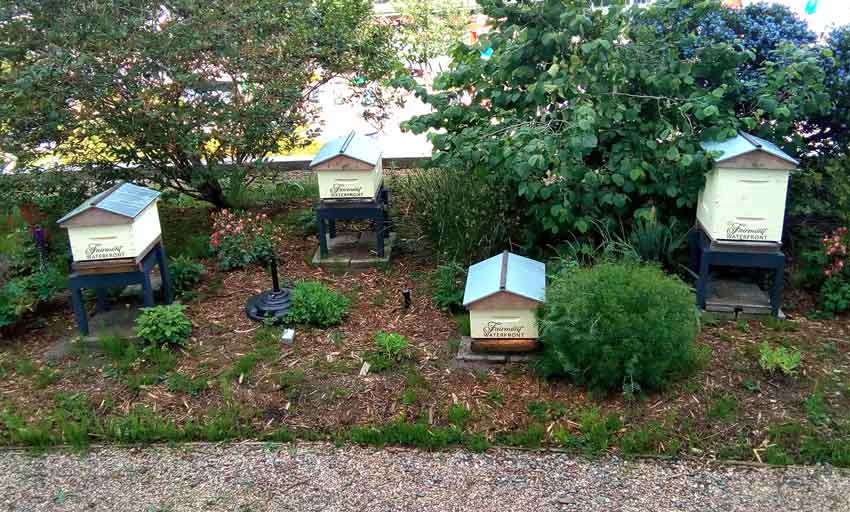 As a result, the annual honey harvest from these roof top hives is over 200 pounds, which is used in the hotel’s cocktails, desserts, salad dressing, hand-churned ice cream, and a custom liquor. There is an information panel about pollinators that also opens so you can see a hive at work. 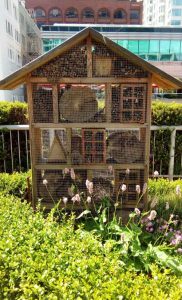 In 2015, the hotel added a pollinator hotel – a “bee and bee” to house the mason bees in the garden. The hotel’s Bee Butler and Bee Team offer free tours of the gardens and apiary every day at 2pm, May through September.

You can learn more about the indigenous plants of the area and the rich history of the local First Nation culture in the hotel’s Talking Trees package. A First Nations guide provides a 90 minute walking tour in Stanley Park as part of this package that includes a one night stay in the hotel and a 3-course dinner with an inspired West Coast menu. The hotel also offers a Bee Sustainable package with accommodations, private apiary tour, and a jar of rooftop honey. Check the hotel’s website for details and pricing.

You can’t get a bad meal in Vancouver. There are ethnic food restaurants from just about everywhere on the globe, and even the small take-out places offer delicious meal options.

The U.S. dollar is strong against the Canadian dollar, giving you about 25 percent more buying power. Remember, you need a passport to enter Canada.

Vancouver Island is a garden destination of its own. Top on the list is the Butchart Gardens, also created from a rock quarry. 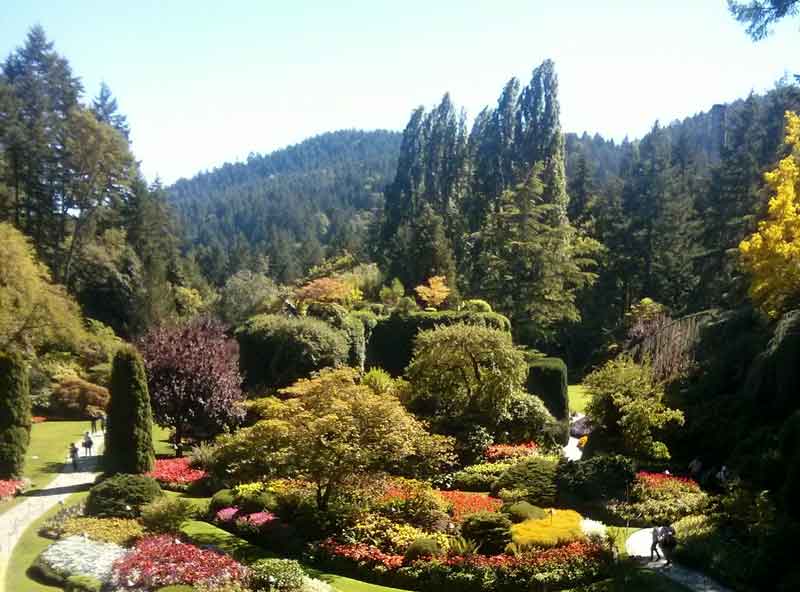 Butchart is over-the-top beautiful. Your first stop is the main reason people visit Butchart – the Sunken Garden. You’ll need to descend the stairs from the observation area, but will be rewarded with an explosion of color from annuals and flowering trees. From here you just follow the paths to the other gardens, all equally as impressive: The Rose garden, a Japanese garden, and the Italian garden in the courtyard of the former Butchart family home will reward your visual senses. Spend time at Waterwheel Square for the dining, many gift shops and visitors center where flowers snipped that day are displayed to show what’s in bloom. Butchart Gardens is an international attraction with visitors from around the world all speaking the language of flowers. 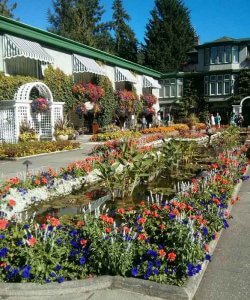 If you only have a day, you can travel to Butchart from Vancouver by ferry. It will be a very long day, taking an early morning ferry at the Tsawwassen terminal. The 90-minute ferry ride is a pleasant trip as it zig zags through the Gulf Islands in the Strait of Georgia. Or splurge and take a seaplane to the island.

Learn more about Vancouver at www.TourismVancouver.com.

Beverly Hurley is the editor of Triangle Gardener magazine and www.GardenDestinations.com. When she is not gardening, she loves to travel.