Tulip Festival in the Skagit Valley

The Pacific Northwest is known for its collection of great garden destinations, and one of the most popular springtime outings is the Skagit Valley Tulip Festival held each year from April 1-30.

Every spring millions of tulips burst into bloom across the Skagit Valley in the northwest corner of the state of Washington, attracting hundreds of thousands of people who travel from near and far to enjoy this horticultural celebration of spring. 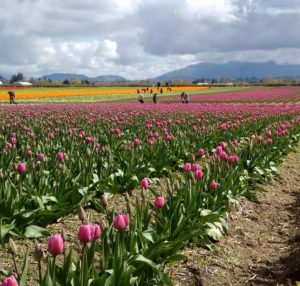 The Skagit Valley Tulip Festival is designed as a driving experience and there is no one site to view all the tulips. Instead, fields of tulips are scattered throughout the valley along with dozens of events and activities that comprise the festival – art shows, gala celebrations, concerts, wine and chocolate tastings, and an open house. For families, there is a Children’s Museum and a petting zoo. Two signature events are the Downtown Mount Vernon Street Fair and the Kiwanis Salmon Barbecue. New for 2017 is the O’ Canada! Heritage Weekend, April 21-23. Visit the Skagit Valley Tulip Festival website for a comprehensive list of events.

As with all things governed by Mother Nature, the tulips bloom according to their own schedule throughout the month-long festival.

The tulip displays are primarily the crops of two major bulb growers – RoozenGaarde/Washington Bulb Co. and the Skagit Valley Bulb Farm. The fields are different each year due to crop rotation. 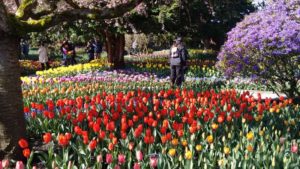 William Roozen immigrated to the area from Holland in 1947 and started a small bulb farm in the Skagit Valley. In 1985 he turned over the business to his children, and today RoozenGaarde is the largest grower of tulips, daffodils and irises in the world with over 1000 acres of fields and 15 acres of greenhouses. RoosenGaarde also plants a 4-acre display garden each year with over 250,000 bulbs (tulips, daffodils, and muscari) and some 150 different flower varieties, plus it includes an authentic Dutch windmill. An added bonus is you can buy the bulbs on display in their catalog. In the fall they offer free bulbinars – seminars on bulb planting. Parking is free at RoozenGaarde, but a nominal admission is charged for their display garden. 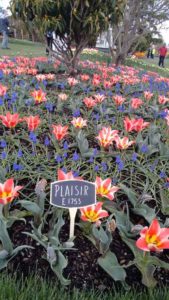 The DeGoede brothers emigrated from Holland in the late 1940s and eventually started a bulb growing business that became the Skagit Valley Bulb Farm. Tulip Town showcases the farm’s many garden displays, gift shops, art gallery, and a café. A Dutch windmill was built in Tulip Town in 2003 using blueprints from the original windmill found in the DeGoede family’s village in Holland. Admission is charged to Tulip Town.

The Skagit Valley Tulip Festival was started in 1984 by officials with the Mount Vernon Chamber of Commerce who saw that people were coming by the thousands to view the tulips. Through the years, events and festivities were added to enhance the visitors’ trip to the Skagit Valley. In 1994 the Tulip Festival left the Chamber of Commerce and became an entity of its own. 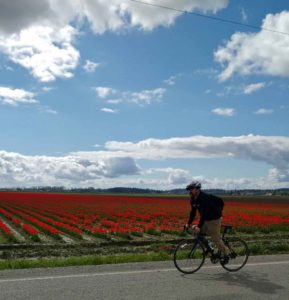 The driving tour is free. Look for highway signs indicating the “tulip route.” It is also a popular route for bicyclists touring the fields. An online bloom map highlights where visitors can see the best displays, which change throughout the bloom cycle. The fields are open daily during this time.

Early April can still be the rainy season, with sunny days becoming more abundant as the month progresses. The daytime temperature is usually in the 60s.

It is essential to bring a pair of old shoes or even better, rain boots. While you can drive (or bike) to see the fields, the best experience is getting out of the car and walking to the edge of the fields for a close up view. The fields can be muddy and wet.

While in the area, check out the many small towns in the valley and the multitude of farm stands selling farm fresh produce and flowers. The small towns and farmhouses along the roads sell goods and many have home-style restaurants.

The Skagit Valley is convenient to a number of other destinations. Vancouver is 2 hours north, Seattle is 1 hour south and Bellingham, Washington, is a mere 30 minutes away. Check out the tulips one day, and the next day head north to the Mt. Baker ski resort or south to the Stevens Pass ski resort. There are also a number of whale watching trips that depart from nearby coastal towns.