Tokyo’s best traditional gardens owe their existence to the shogun – the military dictators of early Japan. Tokugawa Ieyasu, who set up his shogunate government (a military dictatorship) in Edo (now known as Tokyo) in 1603, ruled over Japan so shrewdly and ruthlessly his heirs remained in power for the next 264 years. To thwart insurrection in the provinces, the Tokugawa clan decreed that all daimyo (feudal lords) spend alternate years in Edo, costing feudal lords time and money.

Furthermore, all daimyo were required to leave their families permanently in Edo, as virtual hostages. As many as 270 daimyo maintained mansions in Edo, many of them elaborate compounds with expansive gardens. Although Edo has long since disappeared under the crush of modern Tokyo, some of those Edo-era gardens now provide picture-perfect windows to the past.

Nothing is left to chance in a traditional Japanese landscaped garden. The placement of every stone, tree, stream, hill, and islet are carefully considered to achieve balance and harmony. 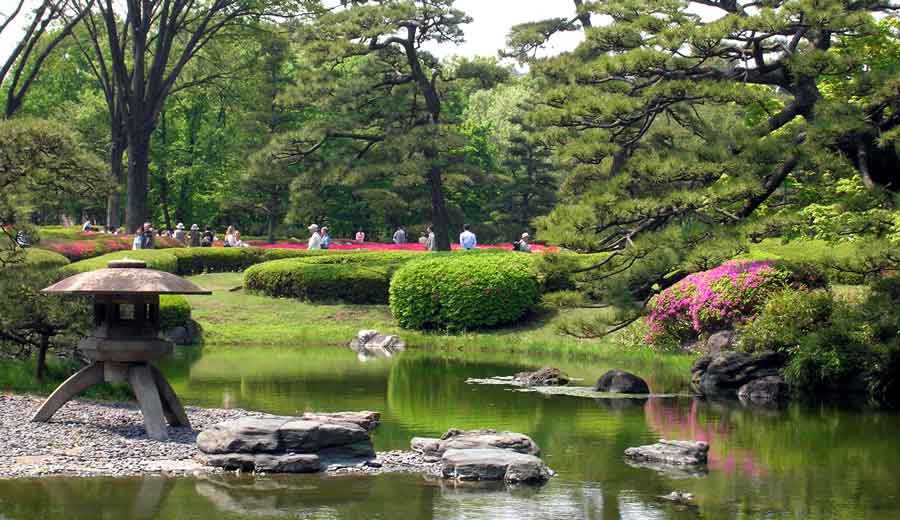 Most gardens are laid out with a circular strolling pathway, known as the kaiyu style, so that each step is rewarded with changing scenes, often meant to represent seashores, hamlets, or famous places like Mt. Fuji in miniature. Because the shogun strictly controlled travel, garden strolls were often enjoyed as “excursions.” Teahouses, where daimyo and high-ranking samurai partook in elaborate tea ceremonies, are placed to afford the most beautiful and peaceful views. Because Japanese gardens are so creatively manipulated down to the last detail, they are almost like art installations fashioned from natural materials.

Completed in 1702, Rikugien was designed by feudal lord Yanagisawa Yoshiyasu to reflect the six principles of waka (Japanese classical poetry). 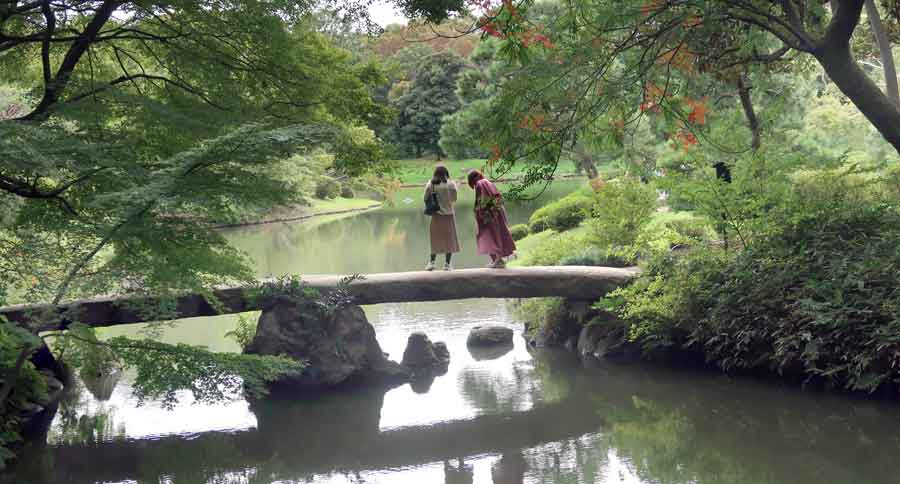 It’s constructed around a pond, with Naka-no-shima island, symbolizing fertility and family prosperity, serving as its focal point. One of the best representative daimyo gardens from the Edo Period (1603–1867), the kaiyu-style garden reproduces 88 scenic spots in miniature associated with classical Chinese and Japanese literature. Today, it’s enjoyed mostly for its changing vistas, artificial hills (Fujishiro-toge offers the most panoramic views), picturesque bridges, autumn maple leaves, and seasonal blooms ranging from cherry blossoms and hydrangea to rhododendron.

The Yanagisawa family remained in possession of Rikugien for more than 170 years, after which Iwasaki Yataro, founder of Mitsubishi, bought it in 1878 as a second residence and donated it to the city in 1938. At Fukiage tea house, the garden’s best views can be contemplated while drinking powdered green tea (matcha) served with a traditional Japanese sweet.

The grounds of Kiyosumi are thought to have belonged to a wealthy merchant before becoming the second home of daimyo Kuze Yamatonokami in the early 1700s. 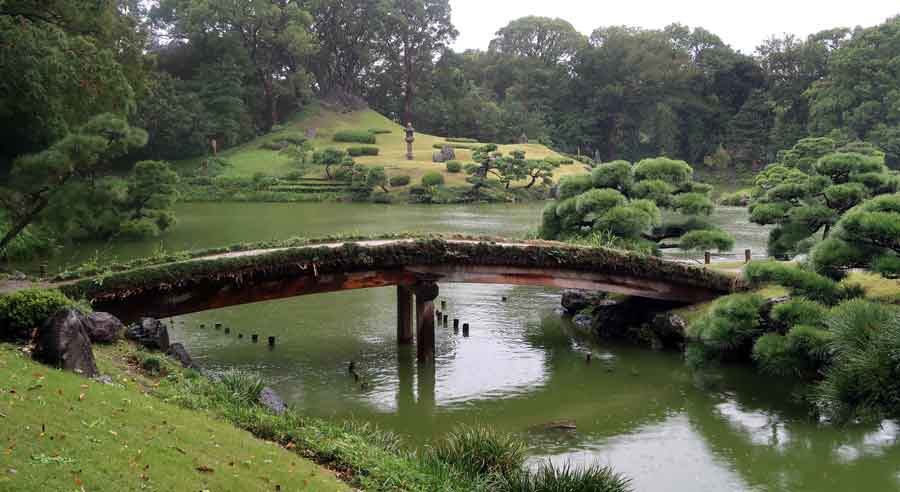 But with his passion for gardens, it was Mitsubishi founder Iwasaki who bought the land in 1878 and transformed Kiyosumi into the city’s most representative kaiyu-style garden of the Meiji Period (1868-1912). The garden’s defining feature is its collection of rare and attractive stones, transported from all over Japan by Mitsubishi steamships and forming stone pathways that extend into the pond along with other uses. After the 1923 Great Kanto Earthquake, which claimed more than 100,000 lives and destroyed part of the garden, the Iwasaki family donated it to the city. Following its restoration, Kiyosumi opened as a public park in 1932.

In contrast to the gardens above, which lie hidden by surrounding woods, Hama-rikyu is expansive and open. Unfortunately, its downtown location on the bay also means that skyscrapers tower over the perimeter. 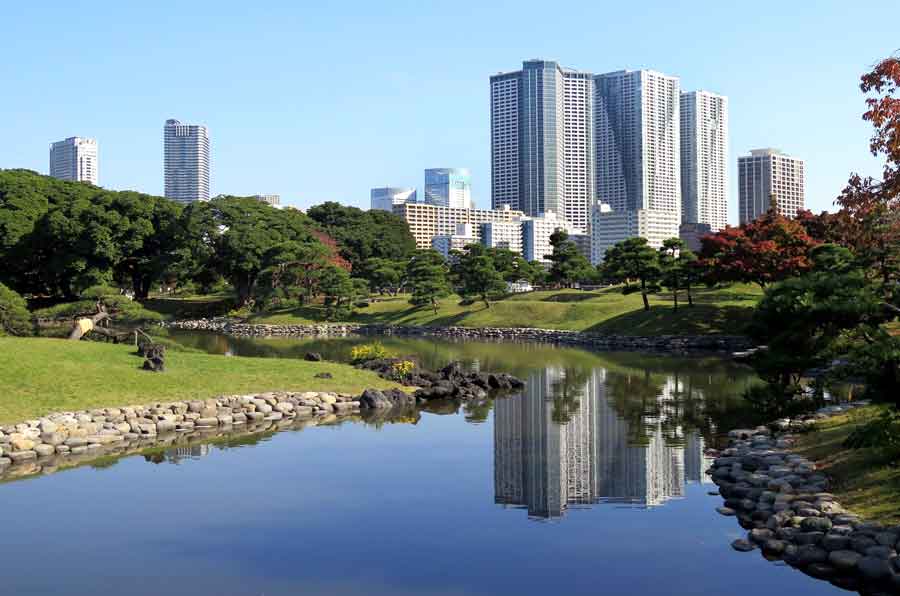 Nevertheless, it’s considered one of Tokyo’s top gardens due mostly to its more than 300 years of history. Once used by shoguns as duck-hunting grounds and a summer retreat, it was later transferred to the Imperial family for entertaining important dignitaries, including General Ulysses S. Grant. It opened to the public in 1946. Several Edo-era features remain, including a 300-year-old pine and Tokyo’s only remaining seawater pond, with water drawn from Tokyo Bay and regulated with a sluice gate. 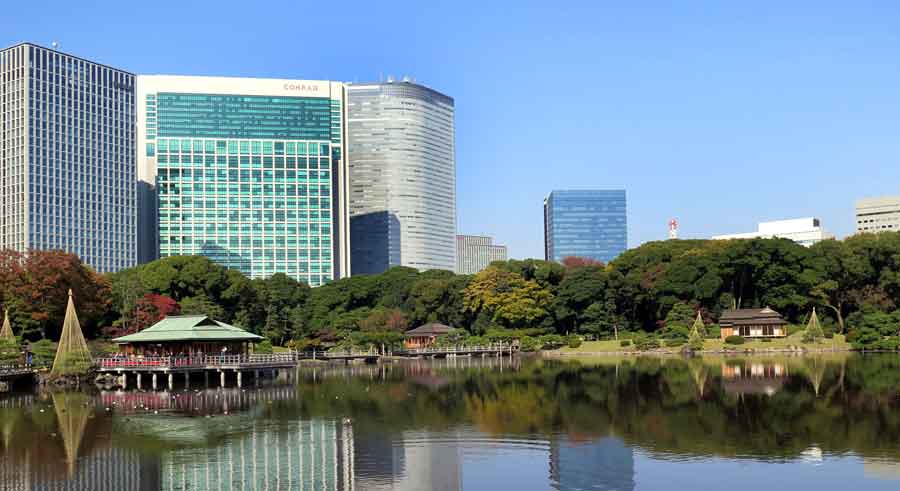 Views of Tokyo’s skyline are afforded from the deck of the Nakajima Tea House, first built in 1704 and offering matcha tea and sweets, while water taxis from the garden’s dock transport passengers to Asakusa. Hama-rikyu is also noted for its spring peony garden, boasting 60 different types and 1,000 plants. Interestingly, the Kamozuka (duck grave mound) was added in 1935, to console the souls of ducks that were killed here.

Because Tokyo’s best traditional gardens date back to the Edo Period, you might like to pay homage to the Tokugawa shoguns responsible for them by visiting the site of their former castle, once the mightiest in the land. The Imperial family’s residence now occupies part of the former massive compound, but the East Garden has been open to the public since 1968. All that remain of the shogun’s castle are the stone foundations of the castle keep, stone walls, gates and a few towers. 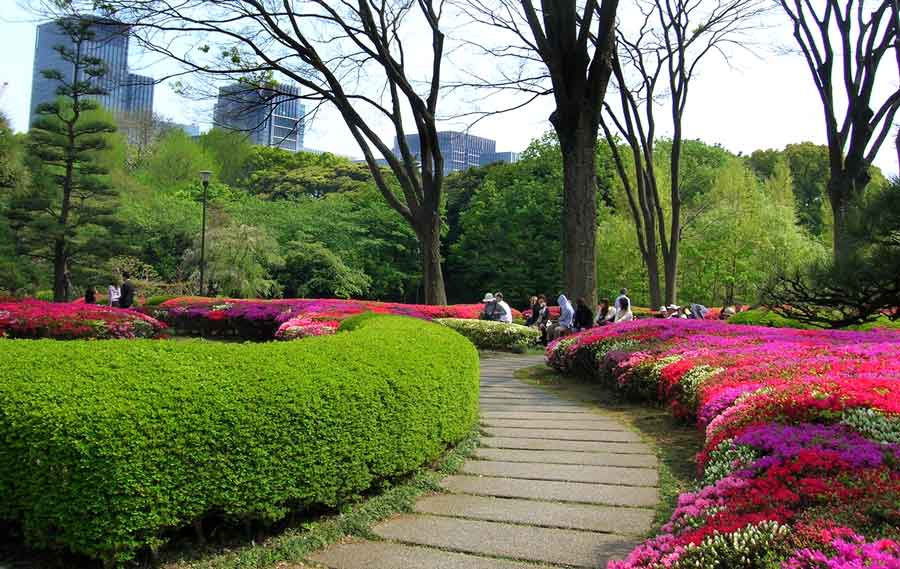 Tucked away in a corner is Ninomaru, a traditional Japanese garden with a pond, stepping stones, and winding paths. It’s noted for its seasonal flowers, including wisteria, azaleas, and irises. Of all of Tokyo’s gardens, this is the most easily accessible, within walking distance of Tokyo Station and popular with area office workers in pleasant weather.

What is now the Shinjuku Gyoen National Garden has served variously as the private estate of a daimyo, an experimental agricultural station for the cultivation of fruits, vegetables, flowers, and stock farming, and the private garden of the Imperial family. It opened to the public in 1949. 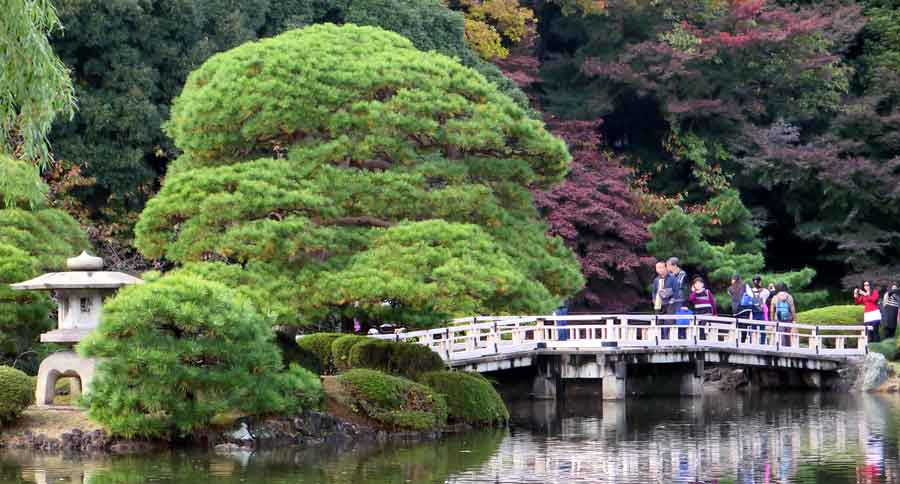 Considered one of the most important Western-style gardens from the Meiji era, 144-acre Shinjuku Gyoen is also one of the city’s largest and most popular. It contains three distinctly different sections, including an imposing formal French garden, planted at the turn of the 20th century with an avenue of sycamore trees bordering a rose bed, and a landscape garden. But the most picturesque is the Japanese traditional garden, especially when its wisteria or azaleas are in bloom.

Buried in the heart of the park, it has three ponds joined by artificial streams and the Taiwan Kaku Pavilion, built in 1927 in commemoration of Emperor Hirohito’s wedding. But there are many other areas to explore, including grassy expanses popular with picnicking families and groups, forested areas, a children’s play area, and a greenhouse with tropical and subtropical plants, including hundreds of orchids. Seasonal highlights include its more than 1,000 cherry trees in spring and its chrysanthemum exhibition in early November.

With more than 1,500 rooms, the New Otani Tokyo is one of the capital’s largest hotels but also boasts the best hotel garden in town. That’s because it was once the private estate of Kiyomasa Kata, a powerful feudal lord from Kumamoto, who probably took solace in his garden after the long biennial trek from Kyushu island. 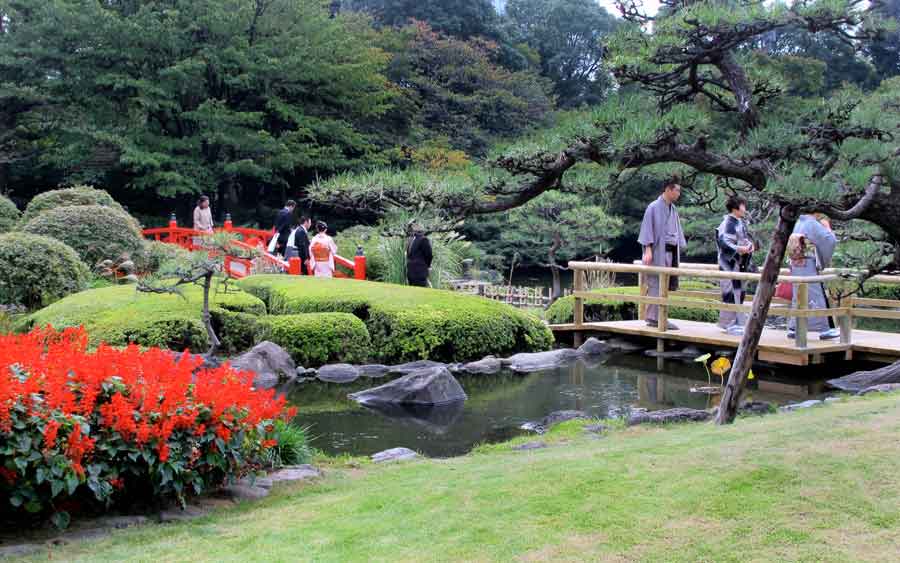 Now reduced to just over 10 acres, the 400-year-old garden is a lesson in what can be accomplished in a diminutive space, with ponds, waterfalls, bridges, stone lanterns, bamboo groves, and manicured bushes. It’s not unusual to see Japanese in traditional attire strolling its pathways after attending weddings in the hotel’s many banquet rooms or on auspicious holidays. The hotel’s Garden Lounge is a sophisticated venue offering dining and cocktails with views overlooking the garden.

—
Beth Reiber’s career as a full-time freelance travel writer has spanned more than three decades and taken her to approximately 55 countries, including seven years living in Germany and Japan. Although Japan is her specialty, the world and writing are her passions. She now resides in Lawrence, Kansas, with a dog, cat, and menopausal chickens. People always ask what her favorite destination is, to which she always replies, “the place I haven’t been to yet.”