The Jungle Garden of Finca Argovia in Mexico

I’m standing in the middle of a rainforest and it’s speaking to me. Not addressing me directly, of course, but definitely communicating. Birds chirp and insects buzz. And water drips off the branches of a massive Ceiba tree, a tree sacred to the ancient Maya people. The air is sweet. In this hilly, green wilderness of the Sierra Madre in Chiapas, Mexico, 50km north of the town of Tapachula, Finca Argovia is out on a limb in every sense.

The garden of the finca (ranch) comprises 187-hectares of lush, rehabilitated jungle that’s home to an estimated 157 bird species and 150 ornamental plants and flowers (this figure excludes many trees and shrubs). And, as I discover, it’s gone the full circle under extraordinary circumstances.

A Former Coffee Plantation in Mexico

Finca Argovia was built in 1880 by a Swiss family, and acquired by the Giesemann family from Germany, in the late 19th Century. They’d ventured to Mexico at the invitation of the Mexican Government who’d invited Europeans to clear the land and grow coffee crops. Back then, the coffee bean was so valuable it was known as oro verde, green gold. Swathes of tropical forests were decimated to make way for coffee plants. Later, in the 1970s, the government threatened to reclaim any cleared, but unutilized land, unless the owners cultivated coffee there. 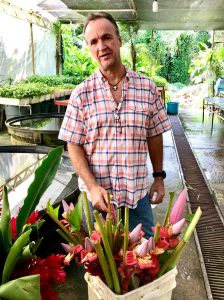 Bruno Giesemann, the fourth-generation owner, grew up on the finca. But by the time Bruno took over in the late 1980s, the global coffee industry was at a bursting point due to an oversupply of beans. Argovia was in financial trouble. Bruno knew he had to do something. “It was time to change. It was time to focus on how to get the value back to the people and the land for the next generations,” he says.

Bruno hatched a radical plan: To rehabilitate the terrain to its previous state as an organic and sustainable jungle, while still producing coffee (albeit on a smaller scale). His aim? To conserve the rainforest while also earning money through the jungle itself. His idea took root.

These days, as well as growing and producing coffee beans, Finca Argovia grows and sells tropical ornamental flowers, along with by-products including honey, fruit jellies and essential oils. Plus it runs luxury accommodation and a restaurant for visitors. All while feeding the soil and regenerating an ancient tropical rainforest.

But, as I quickly discover, a visit to this extraordinary garden nirvana unearths more than an opportunity to ‘smell the roses’. The finca’s onsite flower tour helps you learn organically in every sense.

I set off on my tour in an open-topped jeep with Bruno at the wheel. We bounce along a dirt track, up a steep incline, and down over a small stream. Walls of green envelop us. Overhead, ferns droop and massive shiny leaves brush the sides of the vehicle. We stop regularly and stroll through the lush foliage along tracks and narrow creeks. “We need to see, touch, smell,” Bruno stresses. 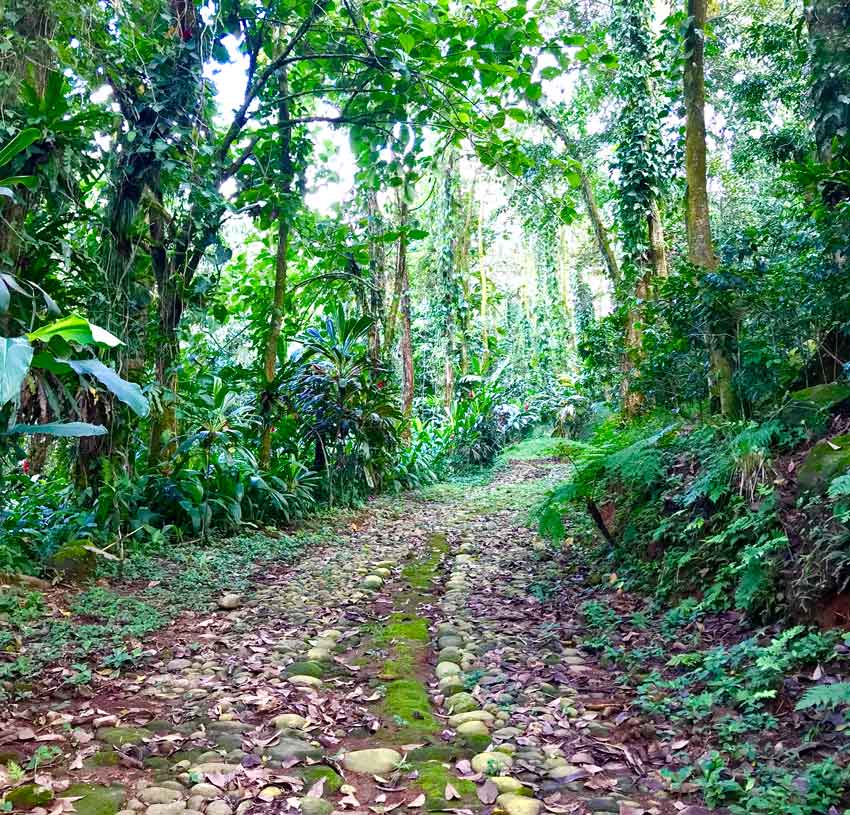 As we stand under the luxuriant growth, Bruno rattles off the names of the surrounding plants. It’s hard to keep track:  cedar (Cedrela odorata), teak (Tectona grandis) and African tuliptrees (Spathodea campanulata) in one section. Primaveras (Cybistax donnelsmithii) and agaves in another. He points out the guayabo volador (Terminalia oblonga) whose wood is used for construction.

This is no manicured garden. There are no delineated rooms. Far from ordered, it is as diverse as it is chaotic. It seems, well, natural.

How wrong I am.

With the exception of pre-existing trees and bushes, including massive kapok trees (Ceiba pentandra) and guanacaste (Enterolobium cyclocarpum), all the ornamental flowers and many shrubs have been planted by hand, including the edible pacaya palm (Chamaedorea tepejilote), hoja santa (Piper auritum) and vanilla pod. It’s a beautiful and perplexing paradise. I dig further.

The best thing about the jungle garden? It teaches us patience. That’s what’s so wonderful about plants – we can’t hurry them up in the way, perhaps, we’d like to.

How does he know where to sow the plants? “It’s simple,” Bruno replies. “The jungle teaches me. She instructs us what she wishes to give us. We try to replicate that.” He also consults local members, many of whom have Maya and Mam heritage and whose knowledge of edible and medicinal plants have been passed down through the generations. The farm supports a community village of 100 workers and their families, located in the finca’s original dwellings. Bruno isn’t the only one learning. 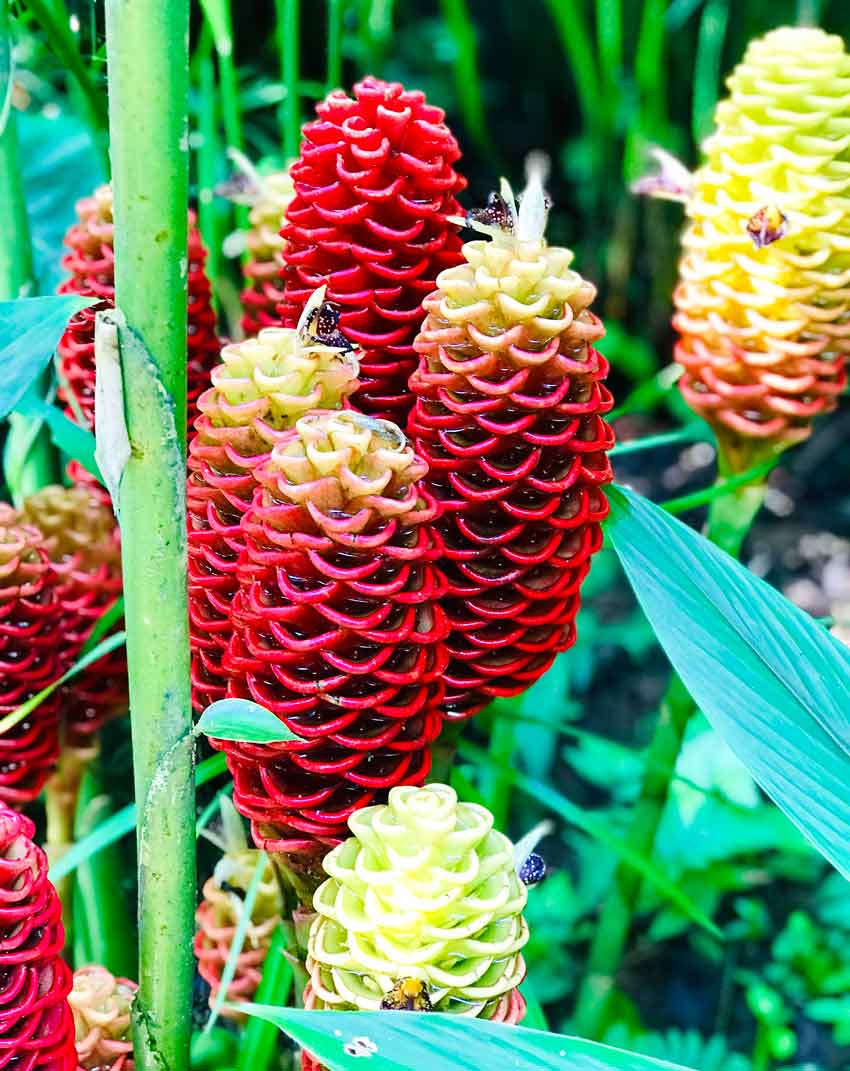 My own knowledge blossoms. I squeeze the plastic-looking Shampoo ginger plant, inhaling the beautiful scent of its oozing liquid. I learn the Latin names of lipstick shrubs (Bixa orellana) and pygmy date (Phoenix roebelenii) palms. And how the little ‘cups’ of the heliconia are perfect for catching rainwater that attracts birds which then devour insects, including mosquitos.

But nothing, even invasive species, is unwelcome here. Bruno laughs, “I don’t use the word weed. It is simply a plant that I’m not familiar with and I have to learn from it. We must learn why it grows in a certain place. I have to be humble enough to learn the purpose of that plant. For example, many of our weeds attract Melipona bees from which we obtain honey.” 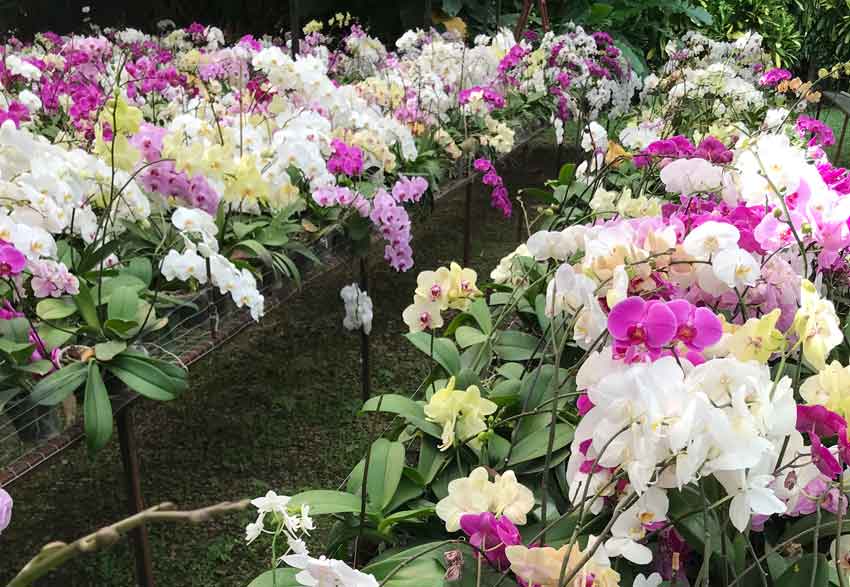 Our final stop is at an outdoor nursery comprising cloth roof and walls, nestled in a clearing. Ordered lines of buckets overflow with cut flowers and foliage: orchid (Orchidaceae), ornamental banana (Musa ornata), red anthurium (Anthurium andraeanum), mother-in-law’s tongue (Sansevieria trifasciata) and mini pineapple (Ananas nanus). These are packed and shipped to local and international florists. I praise Bruno for his efforts.

He smiles and shakes his head: “We were very naïve, we thought we could ‘throw-away’ the jungle. We were selfish to want to grow coffee. That was our wish. Not the soil’s wish. You must ask the land what it is willing to give you, not the other way around.”

Finca Argovia is open all year. The best time to go is in the dry season from November to June. The finca can arrange transportation from Tapachula or if you prefer to ‘go it alone’, public minibuses head as far as Nueva Alemania (a two hour trip) to near the entrance to the finca. The finca will arrange to collect you in a golf cart so you don’t need to walk the steep one kilometer. 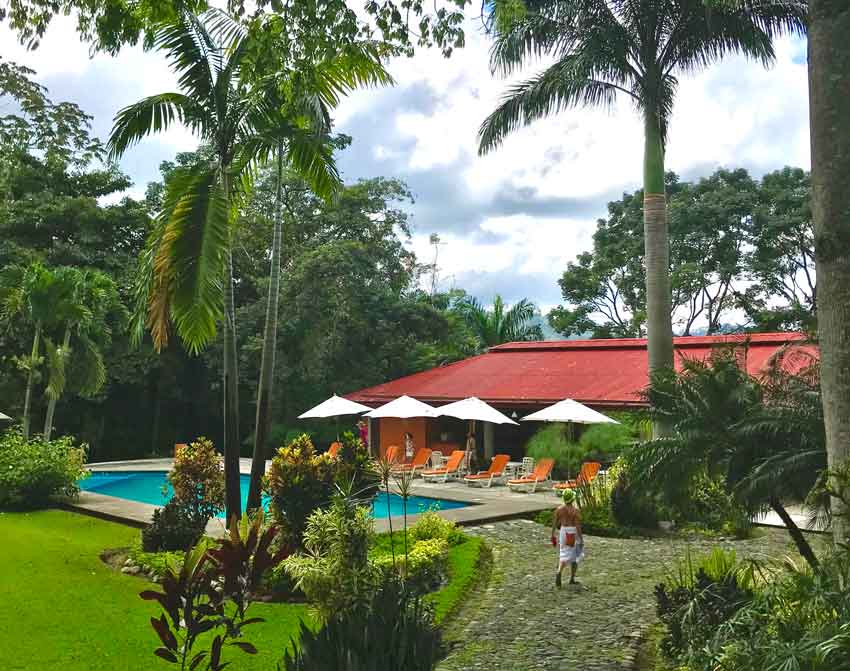 Most visitors stay at least one night if they’ve made the effort to get this far. And it’s worth it. Finca Argovia has 15 luxury cabins, suites, and bungalows, along with a restaurant Tierra de Café that serves high-quality Mexican fusion cuisine.
There are a swimming pool and spa services, plus informative tours of both the coffee factory and the gardens, and a small museum.

You are free to stroll through the resort’s gardens, which are more manicured than the jungle experience, as well as along marked trails to lookouts. Those keen for a dip can bathe in the streams and under waterfalls. Don’t forget your binoculars: the birdlife is incredible. The onsite store sells organic produce from the finca: coffee beans, jam, honey, and more.

Kate Armstrong (www.katearmstrongtravelwriter.com) is an Australian travel journalist who loves writing about anything that sates her curiosity. Author of over 55 Lonely Planet guides and trade titles, she also contributes to Australian and international media covering anything from unusual cuisine to ancient history to soft adventure to quirky characters. She especially loves visiting wilderness areas and gardens, even if she, herself, lacks a green thumb.

Can Your Visit to Botanical Gardens Give You...