The Gardens of Boston and Cape Cod

This historic park, winding up Beacon Hill, with its Frog Pond, shady trees, monuments and colorful shrubberies has seen many events since it was established in 1634; from a Redcoats camp during the Revolutionary War, to hangings, protests and freedom celebrations. It is at the heart of the historic Freedom Trail, which winds through old Boston. It has always been a people place and is still one of the most popular gathering spots in the city.

But Boston Common is just one of the many public spaces in a city where people walk at every opportunity. On a recent day, I wandered around some of them. They were full of people, dogs, and scooters, with families, seniors, students, locals and tourists, out for a stroll and enjoying the relaxed atmosphere. 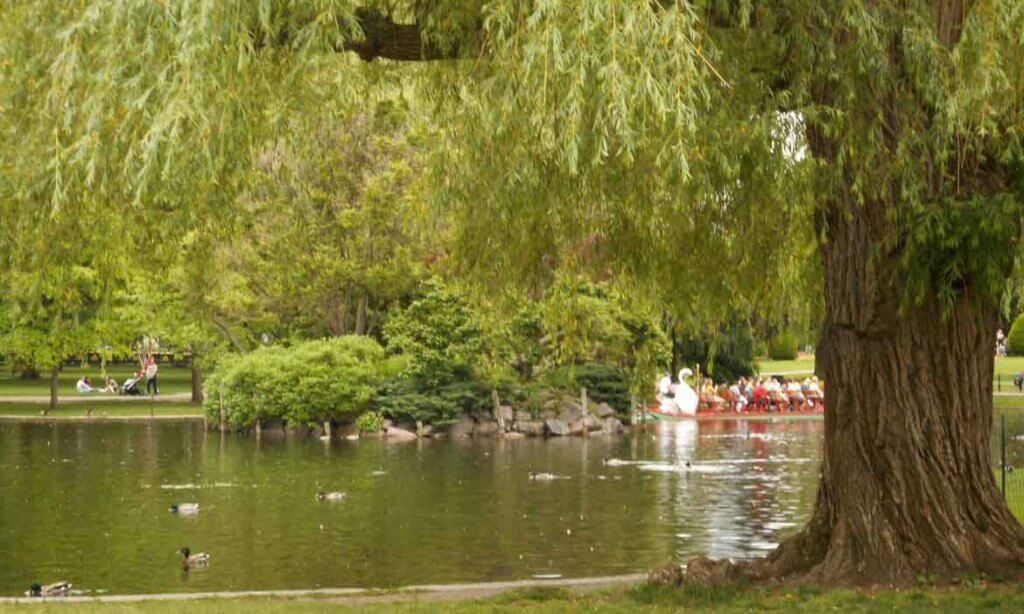 Adjoining Boston Common, on the corner of Charles and Beacon Street is another historic park, Boston Public Garden, a large green space which Bostonians point out is not part of Boston Common but a famous park in its own right, founded in 1837 as America’s first public botanical garden.

Built on reclaimed land from the original mudflats of the Back Bay area, it is part of Boston’s Emerald Necklace – an 1,100-acre chain of nine parks linked by parkways and waterways designed by famous landscape architect Frederick Law Olmsted. The garden’s walkways surround a large lake where a pair of swans and other waterfowl drowse lazily under the giant weeping willows overhanging the water. With fountains and statues, including a fine one of George Washington on horseback erected in 1859, it is a perfect place for a stroll. Afterwards meander down Charles Street, a popular area of trendy boutiques, gift shops, and dining spots, and gathering place for both locals and tourists, where I enjoyed an authentic Italian meal at one of the many restaurants.

There are also a number of lesser-known parks I discovered during my recent exploration of the city. 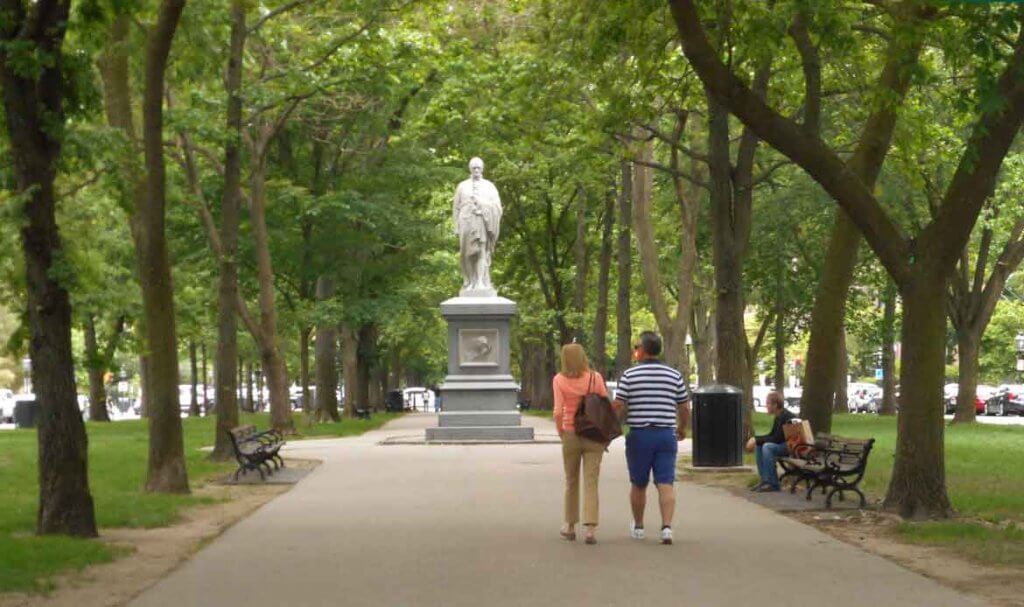 Walk a few blocks west past the protected 19th century brownstones of the Back Bay district, their tiny front gardens ablaze with hydrangeas and rhododendrons, along Commonwealth Avenue with its tree-lined stately promenade mall and statues of Boston’s famous fathers, and south on Dartmouth Street to Copley Square, a small public space named after the artist, where annual militia re-enactments take place. Copley Square is bounded by two lovely old churches, Trinity Church, an 19th century architectural gem now undergoing a massive renovation, and Old South Church, whose congregation dates back to the Pilgrims, along with the magnificent Boston Public Library, the first public library in the United States. 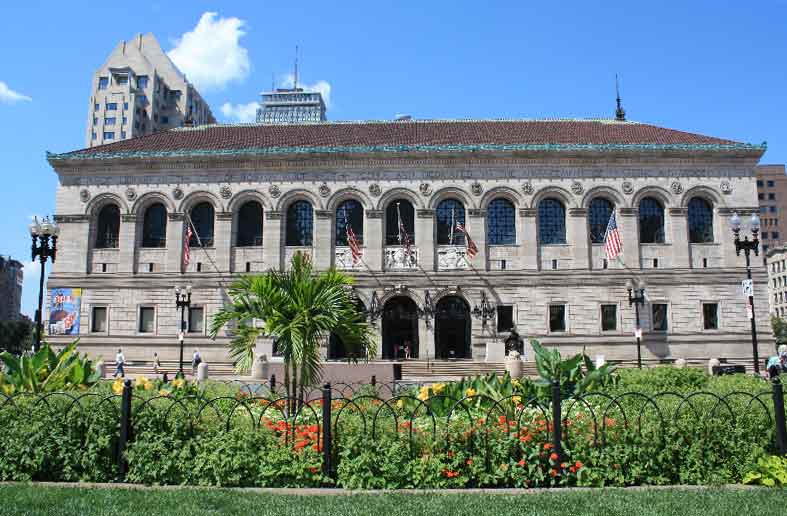 Arts and culture meet in this library. The impressive building was erected at this location from 1888 to 1895 by well-known American architect Charles McKim, one of many public buildings he is known for. It has sculptured bronze doors, mosaic ceilings, marble statues and stairways, a historic reading room with the original desks still in use, and beautiful murals on every floor, painted by notable American artists, including the Sargent room decorated by John Singer Sargent over a 30 year period. 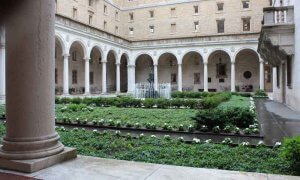 Courtyard at the Boston Public Library / courtesy of the Library

Guided tours are conducted daily and it was here where I discovered another public garden and hidden gem, the Courtyard of the Public Library, a beautiful open air space with a fountain, statues, greenery and seating to relax and enjoy the tranquil atmosphere. Throughout the summer months Concerts in the Courtyard, a series of free one-hour concerts featuring everything from classical to jazz, take place on Wednesdays and Fridays. It truly is an oasis of calm.

You can even find a public garden while indulging in some retail therapy. The Prudential Center has an attractive atrium full of tropical greenery and an outdoor area, to connect shopping areas, with a special planting schedule for maximum pleasure. June features caladiums, while July has a display of begonias. It makes the walk interesting and enjoyable.

Head back towards the Charles River and the Esplanade, a riverwalk park along Back Bay with fine views of the river traffic and the skyline. Reached by a pedestrian bridge over the highway, during the summer, free open-air concerts by the Boston Pops Orchestra take place weekly at the HATCH Memorial Shell in the park.

Getting out of the city? There are many lovely parks and gardens around the “garden” State of Massachusetts. 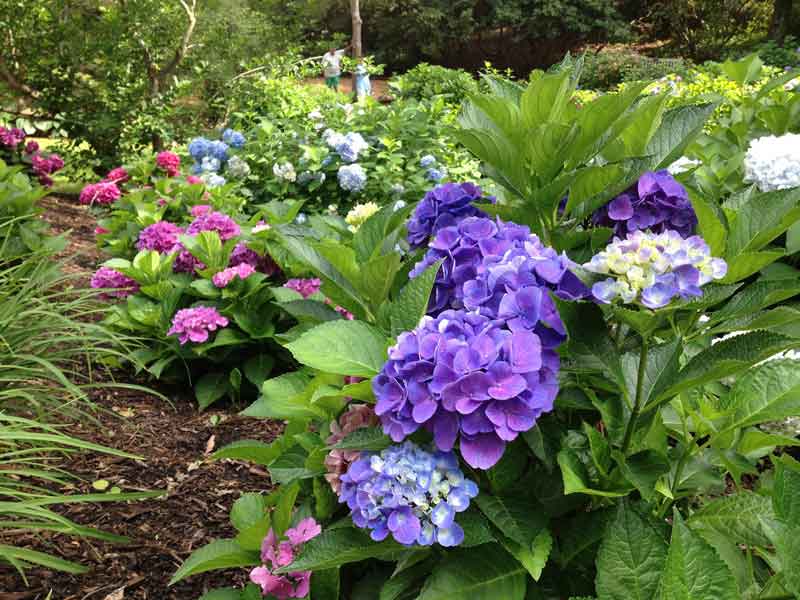 About an hour south of Boston, the Heritage Museum and Gardens at Sandwich, just over the Sagamore Bridge on Cape Cod, is one of the prettiest, known for the hydrangea and rhododendron collection. Formerly the home of Charles Dexter, who began the collection, the 76-acre gardens now contain over 1000 varieties of trees and shrubs. It is a peaceful symphony in pink as you walk the beautifully tended woodland paths, but it is also a teaching garden and offers a number of programs during the summer, including a Hydrangea festival in July with several programs and experts to enhance knowledge of Cape Cod’s signature flower, walking tours and a book signing. 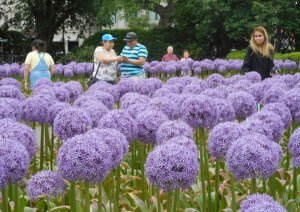 Boston loves its parks and makes good use of them. Boston Parks and Recreation Department offers an extensive program of music and events during the summer, throughout the city. See @bostonparksdept on social media for a calendar of events.

Rather take a guided tour? Boston by Foot offers a selection of walking tours. Wear comfortable shoes as this old city has many cobblestone and uneven brick sidewalks that need care walking.

The parks provide a serene look at a landscape full of arts, culture and enjoyment in this vibrant city. Round out a visit in the trendy area around prestigious Beacon Hill, on Charles Street between Beacon and Chestnut Streets. Here you will find a variety of restaurants and coffee shops, gift shops and boutiques and a lively atmosphere. Toscano is an authentic Italian restaurant where the waiters greet their regulars by name and those who enjoyed the TV series “Cheers” will want to visit the original “Cheers” on Beacon Street, where the show was filmed. A replica can also be found in Quincey market.

There are a variety of hotels in the area of Copley Square, including the five star Fairmont Copley Plaza, most within walking distance of the parks and shopping areas.

For more information and to plan your garden adventure, contact the Greater Boston Convention and Visitors Bureau.

Tess Bridgwater is a Canadian freelance writer with special interest in gardens and history, who has written extensively for newspapers and magazines in the US and Canada. She grew up in southern England, a few miles away from the New Forest and has fond memories of family outings walking the glades and learning to ride on a docile New Forest pony. She is the author of a wartime memoir about growing up in the area – Finding my Footprints in Sarum and A Wessex Girl Remembers – both available on Amazon. tesshereandthere.wordpress.com/