With 50 acres and nine spectacular gardens to explore, it may be difficult for a garden enthusiast to know where to start when visiting Sonneberg Gardens and Mansion State Historic Park in New York’s Finger Lakes region.

But here’s a tip from the Sonnenberg Gardens’ executive director David Hutchings – head straight to the Alpine Garden. That’s where you will find a hydrangea vine planted in 1915 that continues to blossom rich blue hues throughout July and August. Surrounded by ferns, wildflowers and a selection of pine trees, the five-acre Alpine Garden is one of Hutchings’ favorites.

The garden was the last of nine to be commissioned by Mary Clark Thompson who, along with her husband, Frederick Ferris, called this area home, at least in the summer months. 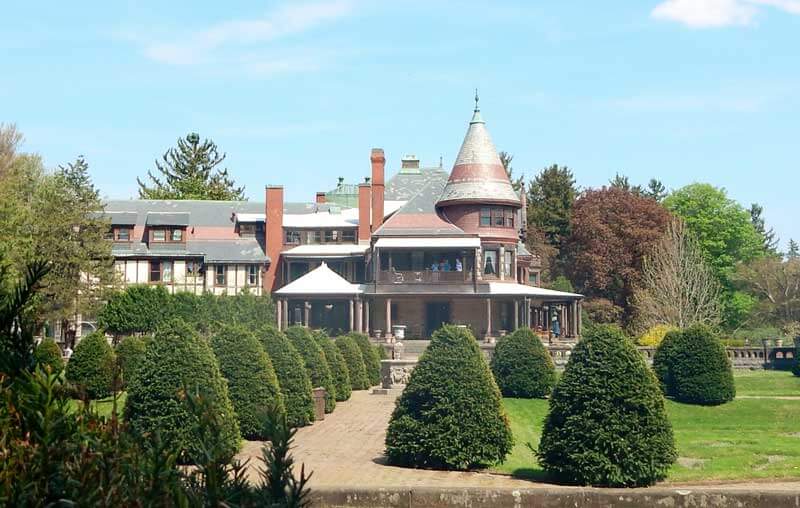 Mary was the daughter of a former New York governor Myron H. Clark, and spent her summers vacationing in the Finger Lakes region. Frederick Ferris was a banker whose company eventually became Chase Manhattan Bank, and thus the source of resources allowing Mary to build not only this magnificent 40 room mansion, but also these unique gardens.

Sonneberg is a German word that translates to “Sunny Hill.” That sunshine, combined with a fertile soil and temperatures moderated by the 11 lakes of this region, create a marvelous growing environment – hardiness zone 6a – for any number of annuals and perennials. The Finger Lakes, which is the second largest wine region in the U.S., has also been called New York City’s bread basket for its agricultural contributions.

One of Mary Clark’s first efforts was the Old-Fashioned Garden, planted in 1905 in the exact same design as Thomas Jefferson’s gardens at Monticello. Outlined by a one-quarter mile boxwood hedge, the garden is planted in a quincunx pattern, a geometric design consisting of four points at the corners of a square or rectangle, with a fifth at the center. In this garden, the geometric points are in a circle. 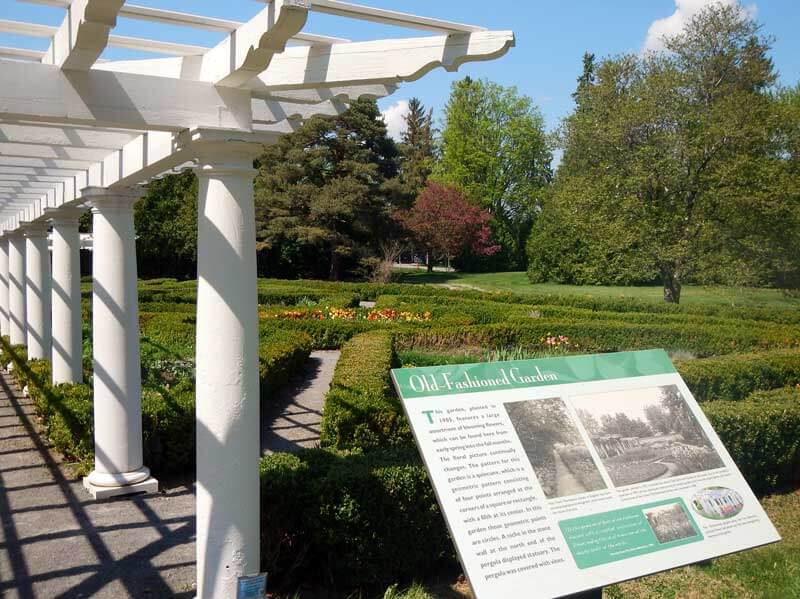 Clustered bellflower (Campanula glomerate), hibiscus and carrot grass (Parthenium hysterophorus) soften stone walls and other statuary while creating a brilliant contrast to the white pergola at the center of the quincunx. This garden is in bloom about nine months of the year.

The Japanese Garden, planted in 1906, was the first residential Japanese garden in the U.S. Mary Clark brought in six landscapers from Japan to ensure authenticity. In addition to a Tea House, five bridges and a 12th Century bronze Buddha, the garden features tanyosho (Pinus densiflora) and umbrella (Sciadopitys verticillata) pine.

More than 100 years ago, creating a garden that features just one flower was considered extravagant. But Mary Clark’s favorite flower was the pansy, so in 1913, she commissioned landscape designer John Handrahan to create a 60 feet by 60 feet Pansy Garden. Thirteen unique beds feature dozens of pansies throughout the year, but the six-foot tall marble fountain that sits on a pansy-shaped base is the focal point.

Other treats on the Sonnenberg grounds include five original Lord and Burnham greenhouses built in 1913. Sure, there are dozens of these greenhouses around the country, but this is one of the very few that has not been modified and remains in its original condition.

Just behind the Old-Fashioned Garden is a castle-looking building that was once the aviary and home to peacocks that roamed the grounds.

A particularly flavorful site at Sonneberg is the Finger Lakes Wine Center. A tasting room provides you samples of a dozen wines from the region, including Sonneberg’s very own Abundance wine.

Sonneberg Gardens, one of only two public gardens in the New York state park system, opened to the public in 1973. Mary Clark Thompson died 50 years earlier in 1923. 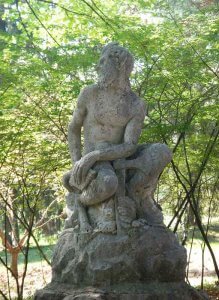 From May through October 31, the Gardens are open every day. Between Memorial Day and Labor Day, the gardens have extended summer hours. Admission is charged and includes a tour of the mansion and greenhouse as well as the gardens. Visit the website for details or call 585-394-4922.

Plan a visit on a Friday in July for the weekly Moonlight Strolls, which features wine, music and a special time to enjoy the Moonlight Garden.

Arts at the Gardens is held the third weekend in August, showcasing the region’s finest artists in a 2-day juried exhibition of fine art and craft.

In October 2017, the gardening symposium will feature Claudia West, author of Planting in the Post-Wild World: Designing Plant Communities for a Resilient Landscape. 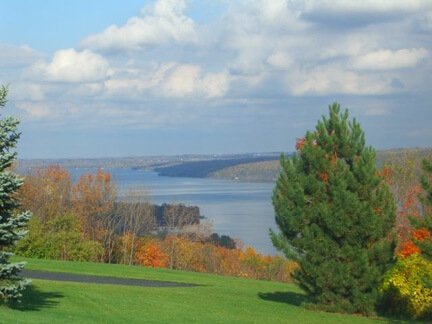 Stay a Little Longer:
The Finger Lakes area is filled with a number of bed and breakfast inns and other unique lodging options. The Inn on the Lake has great access to Canandaigua Lake and is within walking distance of the courthouse where Susan B. Anthony was tried for treason for attempting to vote in the 1872 presidential election.

For upscale dining and lodging, consider Geneva on the Lake, a former Capuchin monastery that is now a Four Diamond historic European-style hotel.

To get your hands dirty with a historic gardening initiative, visit the Ganondagan State Historic Site in Victor. This is where members of the Seneca nation are reintroducing Iroquois White Corn. In an eight-acre patch, visitors and volunteers may plant, weed, water or harvest, depending on the season.