Sintra is Portugal’s go-to city for palaces, estates, villas and even the ruins of a Moorish castle, but there’s nothing quite like Sintra’s Quinta da Regaleira. In fact, it’s probably safe to say that there’s nothing quite like Quinta da Regaleira’s palace and garden in the world. Created by an Italian who designed opera sets and financed by a millionaire, the estate embraces symbols and metaphors inspired by alchemy, mystics, Dante’s parallel hell-and-heaven universe, the Knights Templar, and the golden age of Portuguese discoveries. Its garden, with meandering footpaths, grottoes, underground tunnels, lookout towers, waterfalls, lakes and other fun features, is like nature’s version of an amusement park from the early 1900s. No wonder Quinta da Regaleira is part of the Cultural Landscape of Sintra, a UNESCO World Heritage Site,

Although the land Quinta da Regaleira occupies changed hands at various times during the 18th and 19th centuries, its present incarnation took root in 1892, when Carvalho Monteiro bought it as a summer residence. His dream was to construct a fantasyland that incorporated his ideologies, and for that he turned to Italian architect Luigi Manini, a set designer and painter who had worked in many important Portuguese theaters. Together they devoted more than a decade of their lives to the planning and construction of the garden and palace, assisted by skilled stonemasons, sculptors, and artisans. 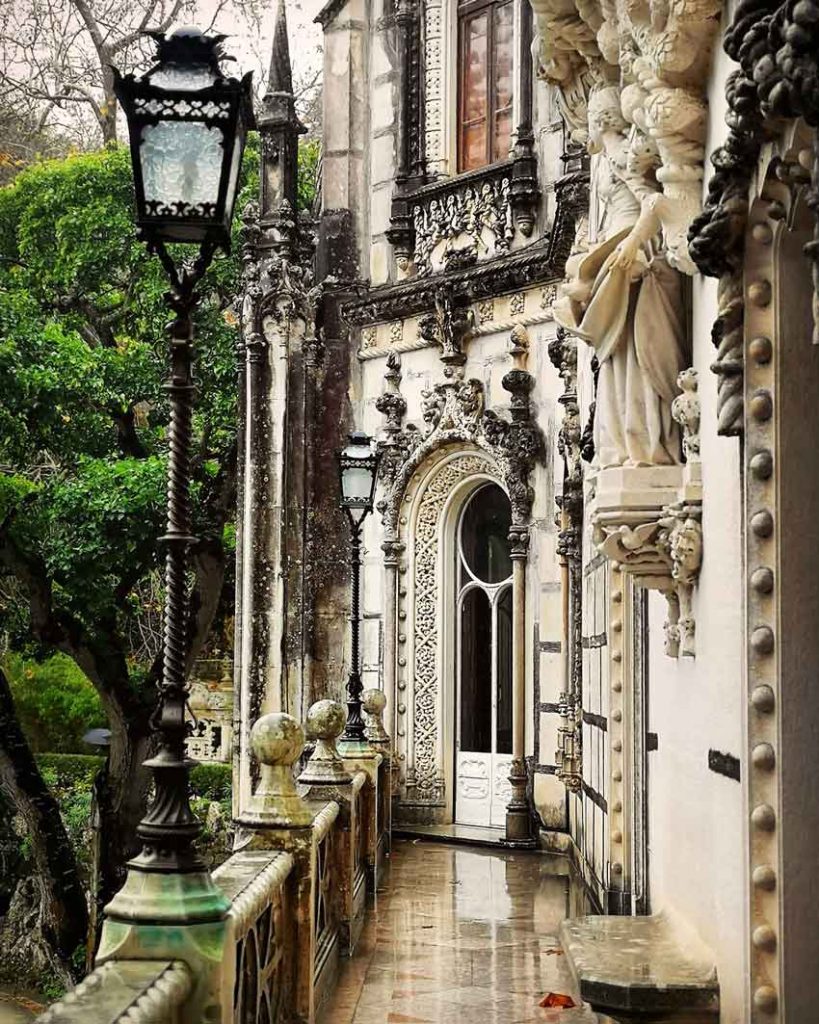 Completed in 1910, the five-story Quinta da Regaleira palace is an exuberant display of architectural styles that include Gothic, Renaissance and Manueline (a lavish ornamentation popular in 16th-century Portugal). Built of stone, its façade is a riot of elaborate Gothic turrets, spirals, gargoyles, balconies, an octagonal tower reminiscent of the Templar Church’s sanctuary in Tomar, and finials, one with a likeness of Portuguese poet Luís de Camões.

Inside, highlights of the main floor include an ornate Italian Renaissance-style drawing room, a dining room with a huge fireplace overwrought with a statue of a woodsman and hunting scenes, and a former billiards room hung with portraits of 20 kings and four queens of the Portuguese monarchy. Two floors upstairs contain family bedrooms, a nursery, study, a laboratory for Monteiro’s scientific interests, and storerooms (although currently closed for renovations, the second floor will open toward the end of 2019 with a permanent exhibition, with the third floor opening in 2020 or later). In the mansion’s two lower levels are kitchens, pantries, an ironing room, and the servants’ dormitory and communal dining area. Despite the palace’s embrace of history in its design and concept, it was equipped with all the latest technology, including heating and an elevator from the basement kitchen to the main floor.

Although Quinta da Regaleira was sold in 1942 for use as a private residence and again in 1987 to the Japanese company Aoki Corporation for private functions, the Sintra Town Council bought it in 1996 and immediately began restoring the palace to its former grandeur. But it’s the whimsical garden that steals the show. 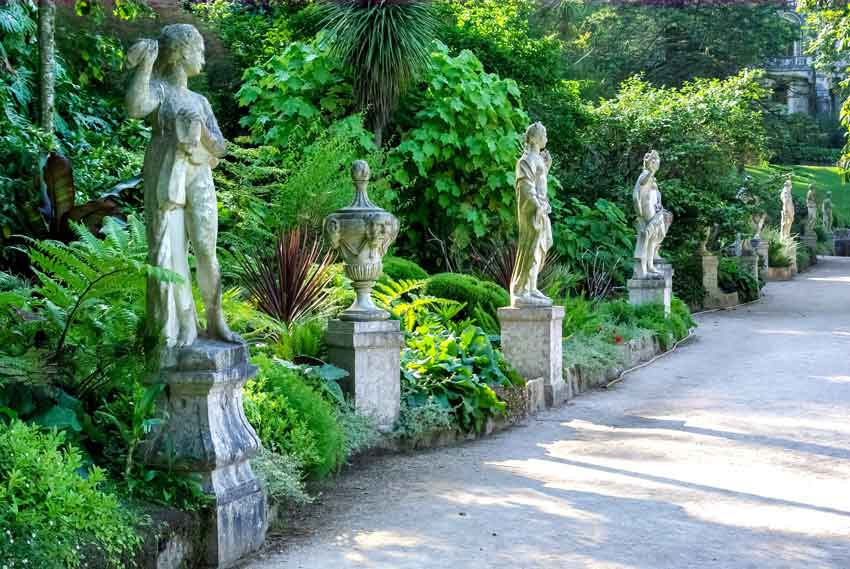 Covering less than 10 acres, it seems much larger, with pathways that traverse hills and low-lying ravines and with hidden tunnels that deliver visitors to unexpected places. Despite maps to help guide visitors, getting lost seems to be part of the garden experience, as though its purpose is to send explorers on a journey to uncharted lands. 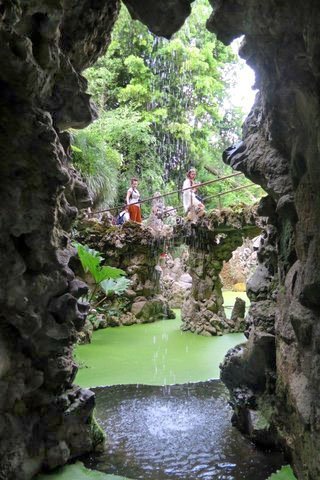 Underground tunnel leading to Lake of the Waterfall / Beth Reiber

Each bend of the winding paths brings different sights or architectural details, including highly decorated benches, elaborate fountains, and statues depicting mythical creatures and gods, from Venus and Orpheus to Pan. Regaleira Tower provides panoramic views of the hilltop Moorish Castle, also part of Sintra’s World Heritage Site, as well as the rooftops of the nearby historic quarter. A small chapel is adorned with lavish frescoes, stuccoes, floor mosaics, and stained-glass windows, filled with scenes from the lives of Christ and Mary, the Templar Order, and a celestial sphere of Portuguese discoveries.

Almost a dozen grottoes are spread throughout the garden, with names like Grotto of the Virgin, Leda’s Grotto, and Labyrinth Grotto, but the most defining trademark of the garden is what you can’t see. Underground walkways from the Grotto of the East, Lake of the Waterfall, and Portal of the Guardians lead to the park’s most unusual element, the Initiatic Well. A subterranean inverted tower that descends 88 feet into the earth with a spiraling staircase, it was never intended as a source for water but rather as a mystic initiation into the world of alchemy and the union of heaven and earth.

But mostly, Sintra’s Quinta da Regaleira’s garden is just plain fun. Children, especially, love the garden’s unpredictability and fantastical features, making it a good bet also for families. Romantic and truly operatic, the garden is an imaginary universe of symbols, metaphors and flights of fancy. It’s the kind of place you can imagine Italian film director Federico Fellini would have felt right at home. 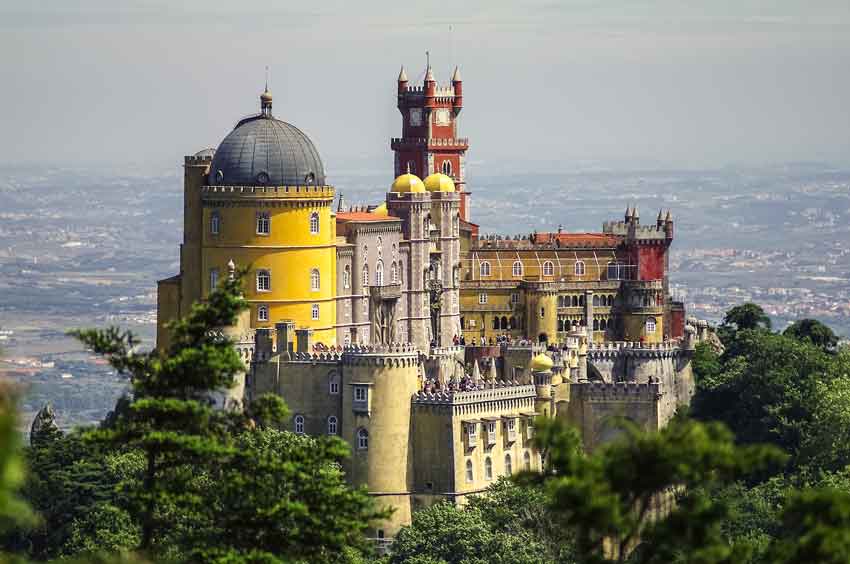 The Cultural Landscape of Sintra World Heritage Site is a unique complex of parks, gardens, palaces, castles, and country villas, the perfect union of historic architecture and exotic, overgrown vegetation. Note that Sintra is extremely hilly.

On the crest of one of the region’s highest hills is The Park and Palace of Pena, Sintra’s most famous UNESCO landmark. Once serving as a summer home for the Portuguese royal family, it’s considered one of the finest examples of 19th-century Portuguese Romanticism. Its 210-acre park, occupying what was once a barren hill, contains gardens, lakes, and 500 different species of trees.

From Pena Palace, a pedestrian path leads in about 15 minutes to the Moorish Castle, built around the 10th century by Muslims and occupying an enviable crest of a high hill with strategic views of the Atlantic coast and the town of Sintra. From there, a pedestrian path leads downhill to the Sintra’s historic quarter in about 40 minutes, passing Villa Sassetti, also designed by Manini, on the way. 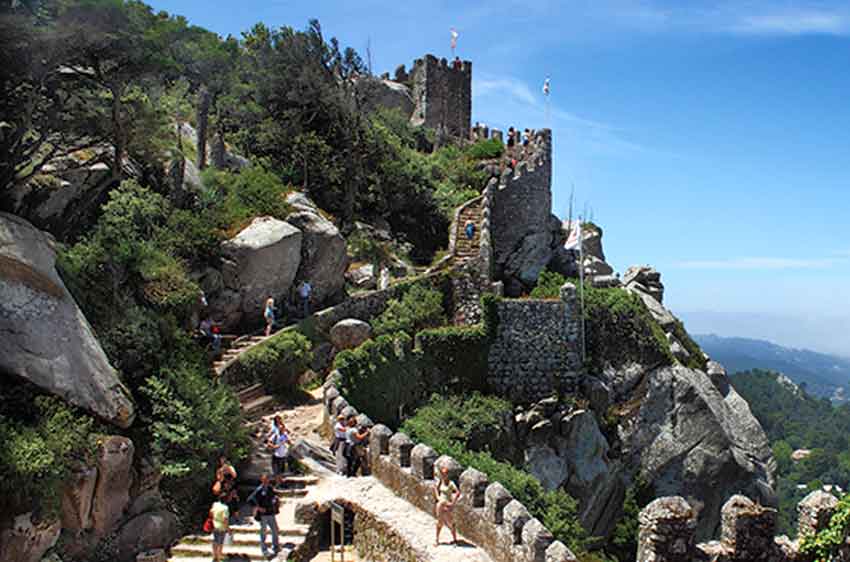 For dining, along the short walk between Quinta da Regaleira and the historic quarter is Lawrence’s Hotel Restaurant, serving European and Portuguese fare in a formal drawing room or outdoor terrace. There are also lots of dining options in the historic quarter.

—
Beth Reiber’s career as a full-time freelance travel writer has spanned more than three decades and taken her to approximately 55 countries, including seven years living in Germany and Japan. Although Japan is her specialty, the world and writing are her passions. She now resides in Lawrence, Kansas, with a dog, cat, and menopausal chickens. People always ask what her favorite destination is, to which she always replies, “the place I haven’t been to yet.”