A Visit to the Santa Fe Botanical Garden

A botanical garden might not be the first place that comes to mind for typical visitors to Santa Fe. They are probably seeking “The New Mexico Experience” – the rich Native American and Spanish history going back several hundred years, a vibrant art scene, imaginative cuisine, and spectacular southwestern scenery. in this semi-arid landscape.

Although you could visit any garden and just enjoy it in the here and now, it helps to know how much time and effort go into a garden’s creation. Unless some great benefactor steps forth and declares, “Here’s the money, here’s the land, and here’s a plan!”, establishing a public garden is an arduous time-consuming process. (This “Great Benefactor” model could indeed still work for a private garden, as it has in the past for such gardens as Biltmore, Winterthur or Longwood.)

So, back to our group of Santa Feans. In 1987, they decided that their city needed a public garden. In 1993 they established the Leonora Curtin Wetland Preserve a few miles south of the city (no admission charged). Through the efforts of many volunteers, invasive species were removed, and the preserve is now home to plant and bird species that thrive around its spring-fed pond. It’s open to the public on weekends from May through October. 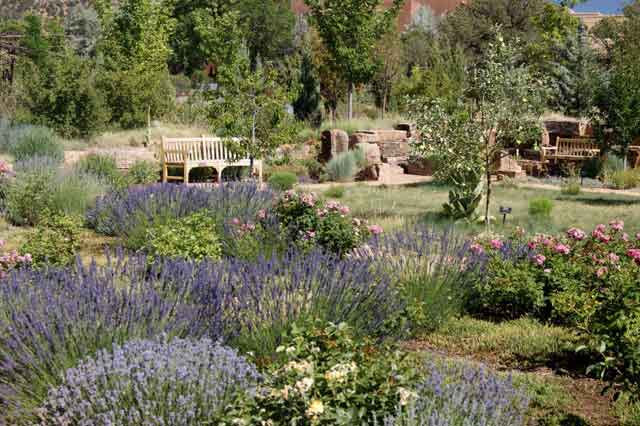 Forging ahead, the Garden leadership  acquired eleven acres on Museum Hill in 2006. Later, three more acres were added to the property. Nationally recognized landscape architect W. Gary Smith was retained to come up with a plan, ultimately approved by the City in 2011. And in 2013, Phase I, the Orchard Garden, opened to the public.

The Santa Fe Botanical Garden will continue to expand in two additional phases. Ojos y Manos: Hands and Eyes is set to open in October 2016. The Courtyard Gardens will be the final phase of development, featuring several small courtyards as commonly seen in Santa Fe residential gardens. The Santa Fe Botanical Garden (admission charged) is still small at just under two acres, but three years have allowed the plants to grow, providing a colorful and mature-looking space.

The visitor first goes past the Meadow Garden, featuring grasses and flowers that mimic the natural areas seen on the New Mexico mesas. Next comes a much more formal garden. This small rectangular space is home to the apple and pear trees commonly seen in the state’s orchards, flanked by the Rose and Lavender Walk on one side and by the Perennial Border on the other. The blue-purple of the lavenders is a perfect complement to the pink of the roses. If you turn around and look back the way you came, you’ll see the sage green foothills of the Sangre de Cristo mountains under the deep blue New Mexico skies, perhaps with a few puffy cumulus clouds floating above. 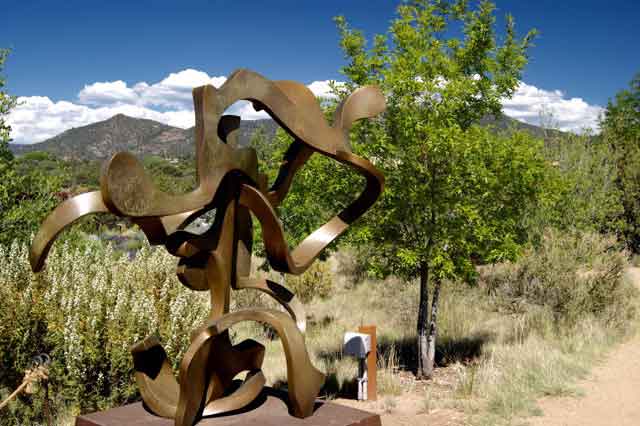 And about those skies: given its arid climate, Santa Fe has a lot of clear weather. If you visit in early summer—June and the first part of July—the cloudless skies can be unrelenting. Owing to the 7,200-feet in elevation, the actual temperatures aren’t that high—mid-to high eighties—and the humidity relatively low, but standing in the midday sun can be uncomfortable. By mid-July the monsoon typically arrives, bringing some rain and definitely more clouds. Don’t let the term monsoon worry you; it’s not like those of southeast Asia. In Santa Fe it just means occasional afternoon thunderstorms produced by towering puffy white clouds, lending drama and extra dimension to the landscape. By mid-September, the monsoon tapers off and temperatures start to cool down to the mid-seventies.

Since opening in 2013, the Santa Fe Botanical Garden has featured several sculpture installations. Bill Barrett’s boldly abstract sculptures are appearing through May 14, 2017, a dramatic foil to the plants and southwestern landscape. 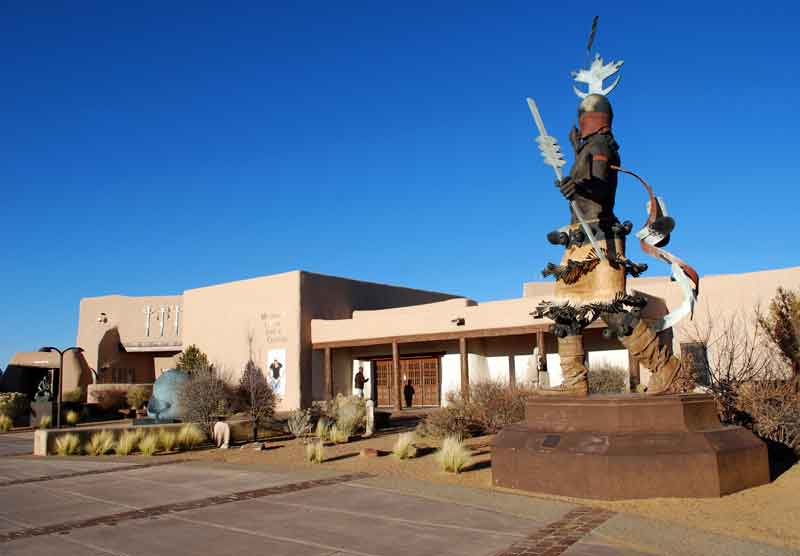 In downtown Santa Fe you will find the central Plaza bounded on one side by the Palace of the Governors, dating from 1610. Directly behind it is the New Mexico History Museum. Nearby are the New Mexico Museum of Art, the Museum of Contemporary Native Arts, and the Georgia O’Keefe Museum. If you are interested in historic churches, the San Miguel Chapel is purportedly the oldest church in the United States. The downtown area also has an abundance of adobe-style hotels and fine restaurants. 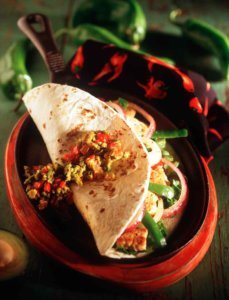 If you prefer to stay a bit outside of the hustle and bustle of downtown Santa Fe, consider the El Rey Inn, only a couple of miles southwest on Cerrillos Road. This historic motel property sitting on the original Route 66 has lush gardens and a genuine retro ambience. Just a few yards down the road is The Pantry restaurant—nothing fancy, just good local New Mexican food. Southeast of town just off the Old Las Vegas Highway is the Bobcat Inn, a B&B set in pleasant gardens. On the way to it you will pass Harry’s Roadhouse, a deservedly popular spot featuring everything from burritos to meatloaf. 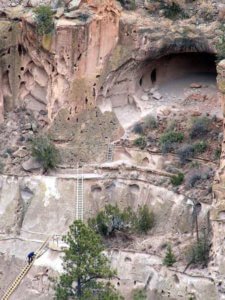 For getting out in the wilds of northern New Mexico, going to Bandelier National Monument is a must with its cliff dwellings and pueblo ruins. Also nearby, Kasha-Katuwe Tent Rocks National Monument gets its name from bizarre tent-shaped rock formations that look like they were carved by human hands. Farther to the northwest of Santa Fe is the Valles Caldera, a thirteen-mile wide bowl-shaped depression left when a volcano collapsed inward on itself. If you want to cool off, Ski Santa Fe is only sixteen miles from downtown. You can drive to 10,000 feet and hike in the woods up to nearly 12,000 feet. In September the lift operates on weekends to give you an easy view of the aspens turning gold.

Contact the Santa Fe tourist office for more information about visiting the area.