The legacy of Augustus Saint Gaudens (1848 – 1907), one of America’s greatest sculptors, lives on in his home and gardens in New Hampshire. For 50 years, the Saint-Gaudens National Historic Site in Cornish has preserved the sculptural work of Saint-Gaudens amidst his beautiful gardens and home, called “Aspet.”

Saint-Gaudens was the leader of the group of artists, writers, musicians and social activists known as the “Cornish Colony” which is said to have been one of the most important gatherings of artists in American history.

To recognize the National Park Service’s 100th anniversary in 2016, the Saint-Gaudens National Historic Site recently celebrated the installation and dramatic unveiling of Saint-Gaudens’ famed Standing Lincoln sculpture. Accompanied by music from the New Hampshire Regiment Serenade Band, the ceremony unfolded on a hot June day in 2016 with an array of prestigious speakers from Governor Maggie Hassan to well-known scholars in the fields of American sculpture. It was fitting that Saint Gaudens’ most famous work, The Standing Lincoln, was brought back to the peaceful gardens and premises of his home and studio.

The original Standing Lincoln was dedicated in Chicago in 1887 and still stands there today. A cast of this statue was also given to Mexico as a sign of friendship in 1966. In 2009, the decision was made to restore and reuse the casts to celebrate the 50th anniversary of the Saint Gaudens site in 2015. This replica created from the original mold is yet another reason to visit and discover this peaceful, historic and beautiful spot.

A free booklet by the National Park Service details the history and development of these Lincoln monuments, as well as other connections between Saint-Gaudens and Lincoln. 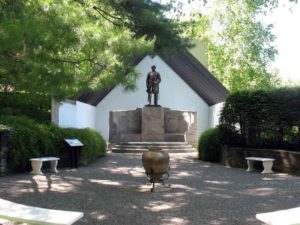 The home, studios and gardens of Augustus Saint-Gaudens are truly an experience with over 100 of his artworks in the galleries and on the grounds; from heroic public monuments to expressive portrait reliefs, and the gold coins that changed the look of American coinage. Saint Gaudens is famous for his iconic Civil War monuments to Abraham Lincoln, Admiral David Farragut, General William T. Sherman, and Robert Gould Shaw and the 54th Massachusetts Regiment. 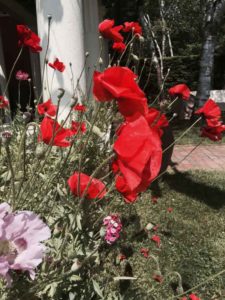 Visitors can enjoy walks through his studio and the Roman-styled atrium and pools that are surrounded and divided by hedging, walkways, garden beds filled with paper-like poppies, water features and fountains. Old-fashioned perennials enclosed by pine and hemlock hedges are formal in style but also have an artistic eye. Saint-Gaudens was personally involved in all aspects of planning and developing the landscape around the house.

Toward the back of the house off of the kitchen, the old vegetable garden is now an established cutting garden planted with historic varieties of annuals used to replenish flower arrangements in the house. A visitor’s center at the back of the property is sensitively created and has a wonderful gift shop and maps.

During the open season from Memorial Day weekend through October 31, the park buildings are open daily from 9am to 4:30pm.  There are a variety of guided tours offered daily. Reservations are not needed for the scheduled tours. The buildings are closed from November through late May but the grounds remain open during the daylight hours. Allow at least 90 minutes to visit the site. If possible, take advantage of a guided tour. An orientation film (18 minutes), will introduce you to the life and artwork of Augustus Saint-Gaudens. The park, with the exception of Aspet, may also be toured on your own, as all artwork has interpretive labels. 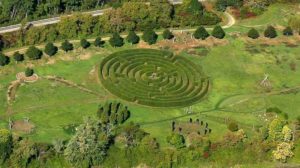 A lovely place to stay is the Snapdragon Inn, a peaceful historic brick hotel right on the main street of Windsor, Vermont. Windsor is a very charming town only five picturesque minutes away from Saint-Gaudens over the Connecticut River and via the longest covered bridge in America.

For a filling breakfast of some of the world’s fluffiest pancakes, try the Windsor Diner also on the main street. Another fun spot is the Harpoon Riverbed Taps and Beer Garden just down the road from downtown Windsor.

If you are looking for extra entertainment, you can rent inner tubes and kayaks at Great River Outfitters, which also has the Path of Life garden with a life-size maze made of hedges. This is great fun for all ages and not as simple as you might think.

Victoria Larson is an avid traveler with a love of gardens and horticultural destinations.