The Saffron Festival in Consuegra, Spain, celebrates the world’s most expensive spice for its weight, thanks largely to the practice of harvesting the delicate flowers and their threads entirely by hand. The sparsity of saffron threads also adds to their value. It takes approximately 150 crocus blossoms to produce a single gram of saffron.

Consuegra’s saffron-picking contest is one of the most popular events at the town’s Saffron Festival, held annually on the last full weekend of October. 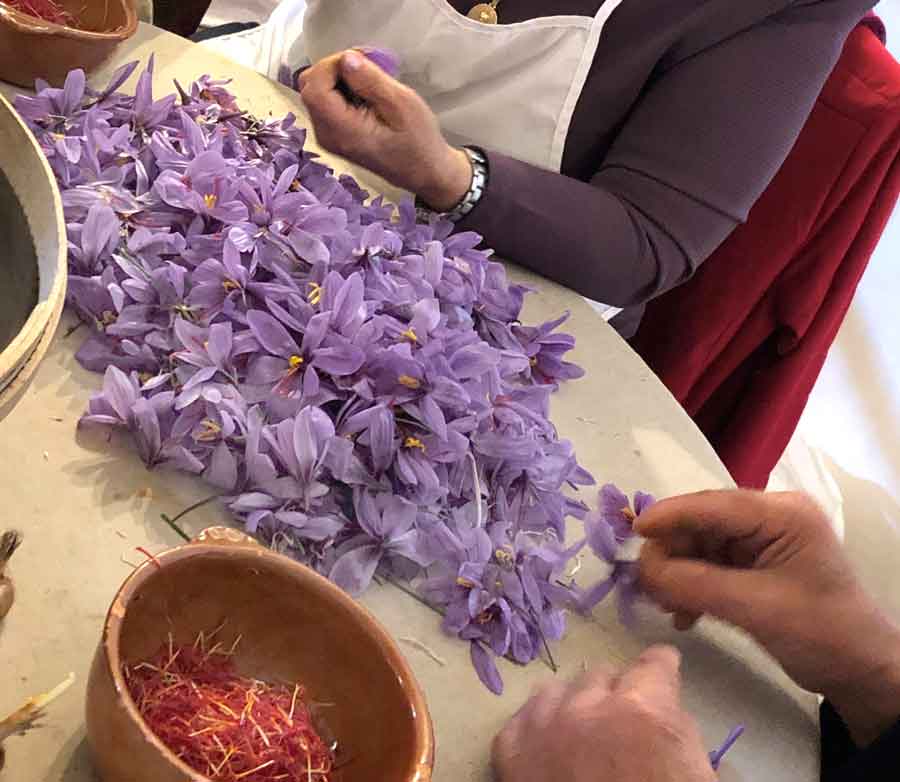 A large audience sits beneath a white tent in the Plaza España in downtown Consuegra. All are silent, their attention focused on a long table at the front of the room, where eight contestants sit quietly, hands in their laps, a pile of brilliant purple crocus blossoms lying before each. Finally, a voice echoes through the microphone: “Uno! Dos! Tres!” and the children spring into action, working intently but quickly through the piled-up blossoms, plucking three slender, curling red stigmas from each flower.

At the end of three minutes, each contestant’s piles are evaluated: How many saffron threads did each one harvest? Are all the threads intact, and have any flowers been left partially unpicked? The answers will determine the winner of this year’s competition and a year’s worth of bragging rights. 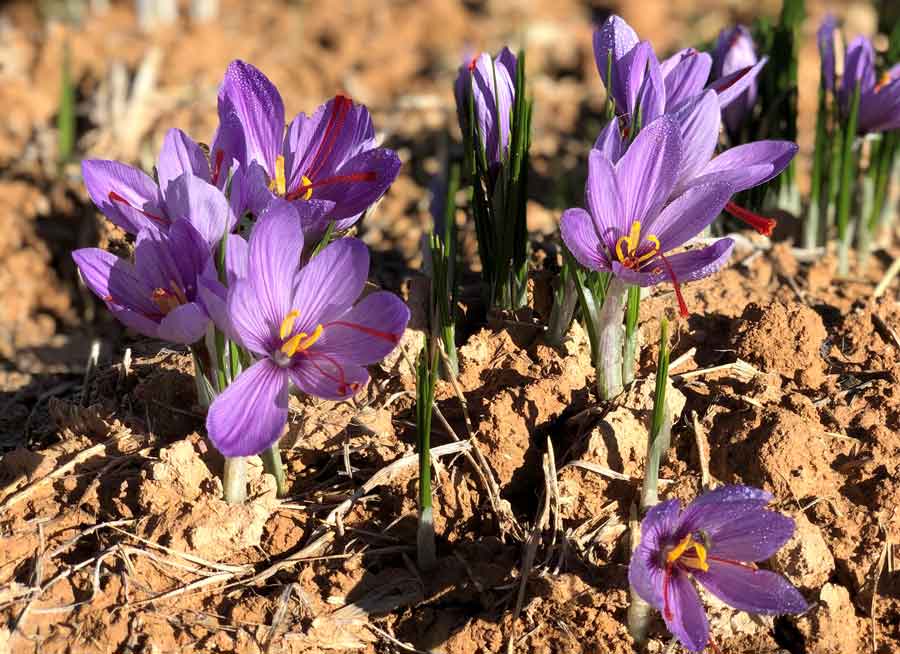 Equally important to Consuegran festival-goers is the region’s prowess in producing this rare spice. Crocus sativus, commonly known as saffron crocus, is grown throughout the sunny, arid regions of the Mediterranean. But the flower thrives here in central Spain, the world’s second largest producer of the highly prized spice. Iran claims the number one spot.

Other Saffron Festival activities include saffron harvesting demonstrations, traditional cooking competitions (with many of the dishes incorporating saffron), and restaurant tasting menus centered on the spice. 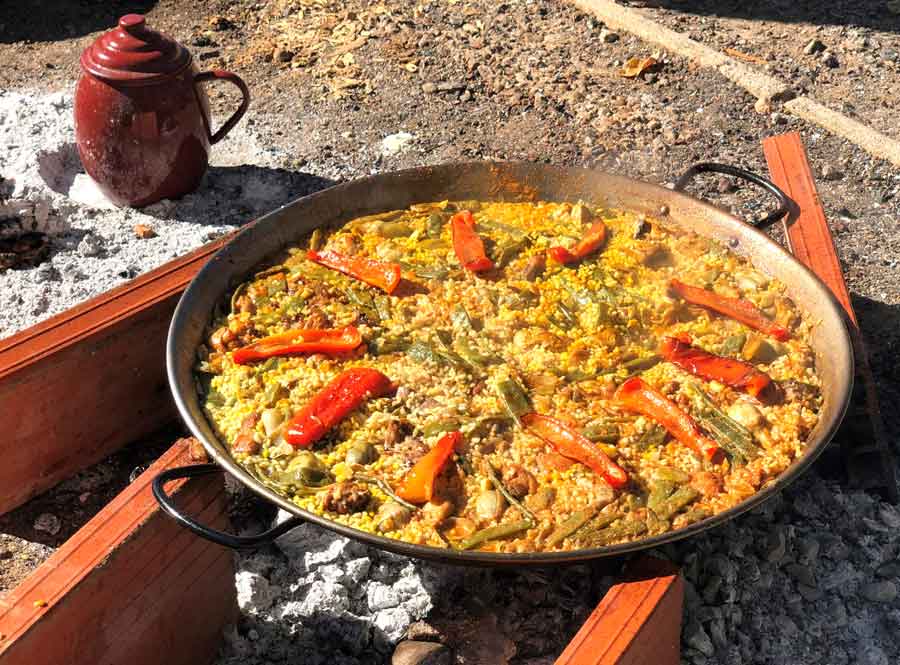 Dishes include paella, the world’s most famous saffron-themed dish, but often venture into the more creative: locally made Manchego slices dusted with saffron; risotto prepared with mushrooms, parmesan, and saffron; fish tacos with garlic-saffron sauce; even saffron-infused ice cream. And everywhere you go there are jars of dried saffron and saffron-infused products to take home.

If Consuegra’s Saffron Festival focuses largely on its famous flower, the celebration also relishes other elements of the region’s storied past. This is the Castilla-La Mancha region of Spain, an area rich with history and tradition. Just outside of town, a rocky outcropping called Calderico Hill is crowned by white 16th-century windmills. They’re a local landmark feted by another La Manchan legend, Miguel de Cervantes, in his novel Don Quixote. 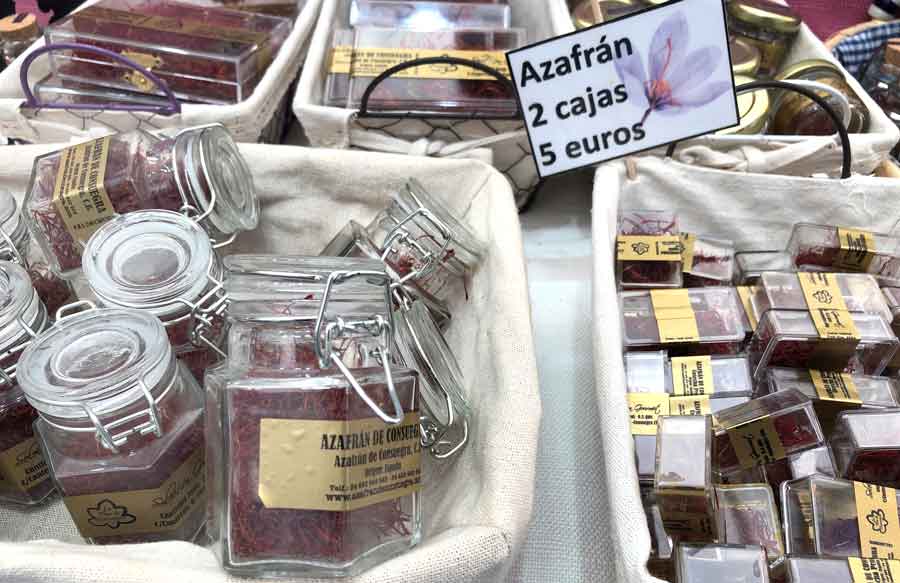 Visitors can expect a taste of all these cultural elements alongside Consuegra’s famous spice: traditional music and historical reenactments, folk dance performances, and the annual crowning of a young Dulcinea, Don Quixote’s fictional sweetheart. Taken together, they form the heart and soul of La Manchan tradition and culture.

But ultimately, it is Consuegra’s famous crocuses that draw visitors—particularly flower lovers—to this Spanish harvest festival, and quiet drives through the countryside that stand out among sightseeing opportunities. In all directions, the landscape is awash with violet in late October, when crocuses mature and burst into bloom. Dozens of harvesters stoop over the blossoms, carefully picking the flowers by hand and dropping them into straw baskets. Flower petals are still damp with dew midmorning, the traditional time of day for the saffron harvest. For it is at midmorning when the crocuses open their petals wide to drink in the morning sunshine. Midmorning also happens to be your best opportunity to see these small flowers showing off, revealing their saffron threads in all their crimson glory. 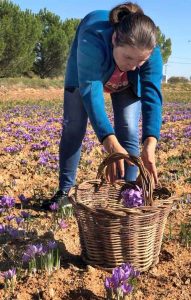 The Saffron Festival takes place annually the last full weekend of October, timed to coincide with the harvest of the saffron crocus flower. Purchase tickets online to Saffron Festival events such as the crowning of the Dulcinea, concerts, and the saffron speed-picking competitions. Self-driving tours of the region’s saffron fields are free. Head out midmorning to see the flowers fully open to the sun, the time of day you are most likely to observe the hand-harvesting of the blossoms.

Consuegra lies 40 miles southeast of Toledo. The city is famous for its Moorish castle, ancient houses of Jewish, Muslim, and Christian houses of worship, and the El Greco Museum focused on the Spanish Renaissance painter who lived here in the late-16th to early-17th-centuries. Approximately 80 miles north of Consuegra lies Madrid, a hub for international air and train travel.

Obtain more travel details, including recommendations for lodging and English-language guided tours, from Consuegra Tourism or the Tourist Office of Spain.

Featured image: Saffron crocus / Amy S. Eckert
—
Amy S. Eckert is an award-winning freelance writer based in Holland, Michigan. She enjoys hiking with her too-heavy but beautiful four-color wildflower identification book and, when she’s home, babying her hydrangeas and rhododendrons.