The beginning of one of Germany’s finest palace gardens – Pillnitz Palace – began when Augustus the Strong commissioned a riverside palace to which he could bring guests by boat. He dreamed of making his capital of Dresden the Venice of Saxony.

There was already a 14th-century medieval manor house at Pillnitz, which had a history as a “pleasure palace” for royal mistresses. Augustus’s older brother, Elector John George IV of Saxony, had acquired it in 1694 as a present for his mistress, and Augustus himself had in turn given it to his favorite, the Countess of Cosel, in 1706. A decade later, when she fell out of royal favor, Augustus reclaimed it, and ordered a new summer palace built facing the river, an oriental-influenced extravaganza he could use for entertaining with Venetian-style masqued balls, costume parties, sporting contests, and wine festivals. 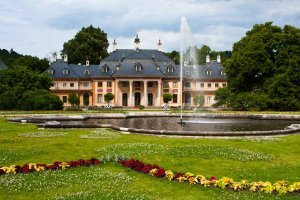 Countess Cosel had begun the hedged walkways and a baroque formal garden, the Lustgarten, or pleasure garden. Since her time it has been changed several times. Today its formal beds are designed as a medallion inside a square, with a pool in the center and geometrical plantings. The symmetry is softened by shrubs and trees at the outer edges, and a shimmering waterspout in the central pool.

The formal design worked well as the centerpiece of Augustus the Strong’s grand plans. Mirror imaging Augustus’s first Riverside Palace, designed by Matthäus Daniel Pöppelmann in 1720, is the matching façade of the Upper Palace, completed three years later. Both buildings blend late baroque with the Chinoiserie style that was popular in the late 18th century. A staircase bringing guests from the river to the palace was built in 1722, later enhanced by water stairs to form a gondola dock. Palace gardens were extended to add parterres at either side of a long Mailebahn, a lawn for playing paille-maille, a long-forgotten game somewhat similar to croquet. 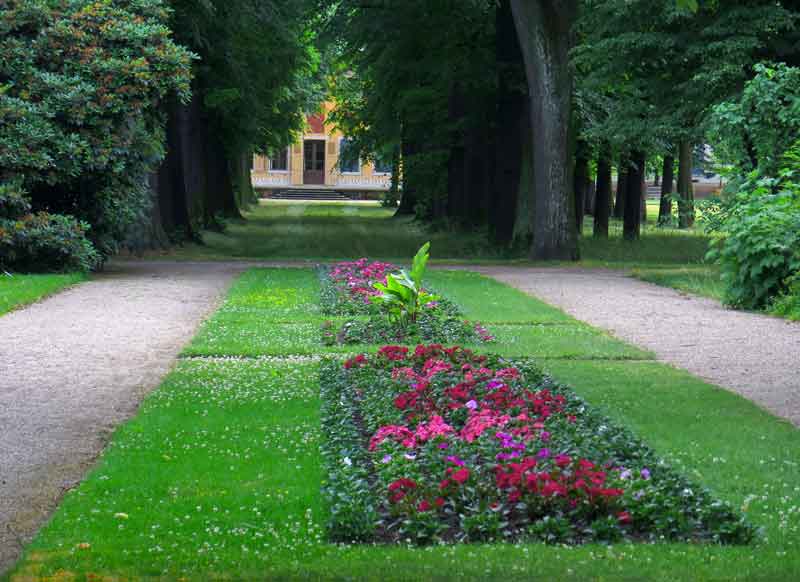 By the late 1720s, Augustus had lost interest in Pillnitz, concentrating more on making Dresden itself a glittering city to rival the great capitals of Europe. Not much happened at Pillnitz until Augustus’s great-grandson Frederick Augustus I became Elector, and in 1765 made Pillnitz the royal family’s summer residence.

It was then that the park was extended to create an English Garden, landscaped with exotic trees. He built a Chinese Garden and on the hill behind it an artificial ruin, a popular folly in the late 1700s. The valley behind the palace was landscaped with walking paths and arched stone bridges in 1780. 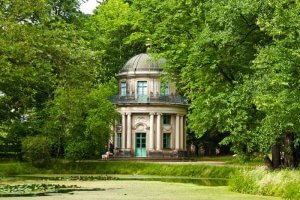 When the original “castle” – more a manor house – burned in 1818, Frederick Augustus built the Neoclassical New Palace, forming the third side of the Pleasure Garden, its balanced symmetry complementing the matching palace facades at either side.

In the 1860s the Pleasure Garden was again redesigned, this time following the ideas of landscape architect Peter Joseph Lennè, whose plans for the royal gardens at Potsdam and Berlin moved German garden design from Baroque to the Neoclassical style. With a few later changes, this is the park you see today, and its charm lies in the way all these styles – baroque, neoclassical and English landscape – blend and mingle harmoniously. 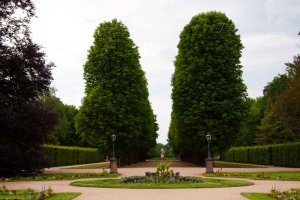 The entrance leads immediately into the formal Pleasure Garden, surrounded on three sides by palaces, its sculptured beds bright with seasonal flowers and contrasting foliage plants that range from silver-gray to purple. The fourth side opens to the park, looking straight down the Maillebahn, now bordered by two 1600-foot rows of chestnut trees. These were planted in 1965, one of the few changes made during the postwar years when Saxony was behind the Iron Curtain that separated Soviet-controlled East Germany from the rest of the country. 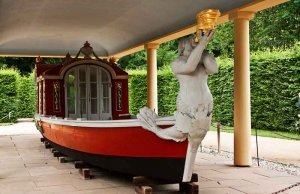 At either side are small rectangular parterres enclosed by tall hedges, each with different perennial plantings and flagstone paths. In one is a replica of the original red gondola that brought Frederick Augustus to Pillnitz from Dresden.

Beyond the hedge gardens, the wooded landscape of the English garden is planted with native and exotic trees. Paths wind through, leading to the Englisher Teich, a pond almost covered in pink waterlilies (Nymphaea pubescens). At its end is reflected the English Pavilion, designed after Bramante’s Tempietto in Rome. A replica of a first-century Roman marble head stands amid the waterlilies.

From the pavilion, paths curve around to the garden’s most famous feature, one of Europe’s oldest camellias (Camellia japonica). It is one of four brought from Japan to London’s Royal Botanic Gardens at Kew in 1779, and planted here in 1801. Now almost 100 feet tall, it is covered in tens of thousands of carmine blossoms from mid-February to April. 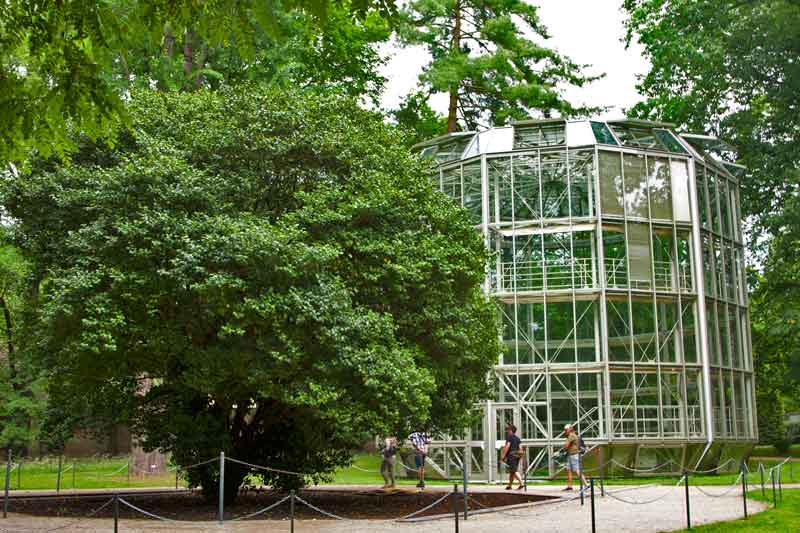 The camellia with its greenhouse / Stillman Rogers

As fascinating as this tree is the structure beside it (or over it if you visit in colder months.) A gigantic greenhouse (it weighs 54 tons and stands more than 43 feet tall) is rolled on rails to completely enclose the tree, protecting it from frost and controlling temperature, ventilation and humidity. When the tree is covered, which includes its blooming season, visitors can view it from all sides on two levels of walkways inside the greenhouse. Before this ingenious system was built in 1992, the tree was encased in a wooden house that was rebuilt each year and warmed with a heater.

Past the camellia is the Orangerie, where the cold-sensitive plants in wooden pots that decorate the palace grounds are brought for the winter. In warm weather it is used for shows, such as the Bonsai Triennial and other expositions. Behind this, the Palm House crowns a rise, a huge glass conservatory begun in 1859, then Germany’s largest cast-iron greenhouse. Its three sections house exotic plants from South Africa, Australia and New Zealand, in 7000 square feet of warmed and cooled space. 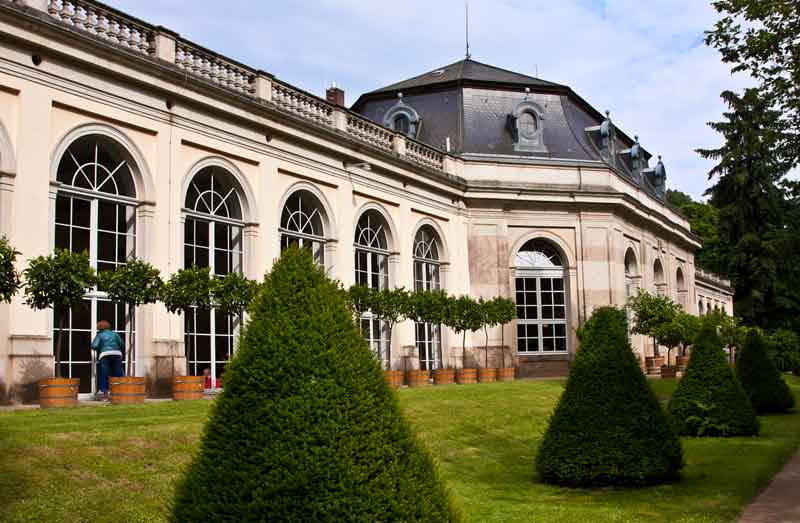 The park’s northern edge ends with the Chinese Garden, its pavilion decorated inside with paintings of Chinese landscapes. Between here and the Upper Palace are three parallel expanses of manicured lawn separated by long stands of mature hardwoods. The center of each lawn is planted with massed red impatiens (Impatiens wallerana), the whole effect intended to draw the eye to the palace. There beds, each with more than 150 rosebushes, paint almost solid blocks of pink blossoms, bookended by pots of tall golden angel’s trumpet (Brugmansia aurea) from Ecuador. Pots of blue hydrangea (Hydrangea macrophylla) line the wall of the Upper Palace.

This and the other palaces are worth touring, for their exuberant Chinese decorations and for the museums they house: decorative arts from State Arts Collections and a reconstruction of the New Palace kitchens. But it is park surrounding them that will be the highlight for any garden lover. 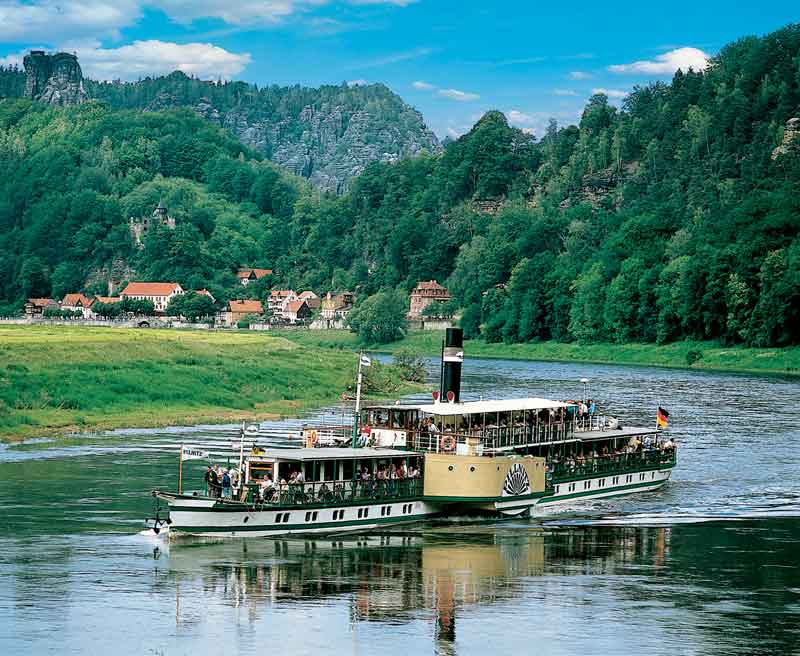 Although you can get to Pillnitz from Dresden’s old center by bus, the best way to arrive is, as Augustus’s guests did, by boat. Paddle steamers of the Sächsiche Dampfschiffahrt leave Dresden’s Terrassenufer landing several times a day for the scenic trip along the river. You can stay right on the palace grounds, at Dresden Pillnitz Palace Hotel, where there is an excellent restaurant. But you’ll also want to see Dresden’s other brilliantly restored palaces, each housing astonishing treasures collected by the many generations of Saxony’s royal family. Within a few steps of all these and of the magnificent Frauenkirche church is the contemporary Amedia Hotel Dresden.

—
Barbara Radcliffe Rogers is the Luxury Travel Editor for BellaOnline.