The county of Kent is aptly referred to as “the garden of England.” Over the centuries many of the aristocracy built country estates and gardens within this verdant area, only 40 miles from London. One of the most spectacular is Penshurst Place, a massive medieval masterpiece with towers and turrets set within a 2,500 acre estate. The gardens at Penshurst Place are among the oldest in private ownership with records dating back to 1346.

With the wedding of Prince Harry there is a renewed interest in all things Royal. Interestingly, Harry’s 14th great grandfather, King Henry VIII, was one of the previous owners of Penshurst. Today it is privately owned by the Sidney family, whose ancestors have continuously lived at Penshurst since it was granted to them by King Edward VI back in 1552.

A guided tour of this stately home is a fascinating trip through history with a series of rooms filled with a remarkable collection of armor, tapestries, antique furniture, historic portraits and fine porcelain. In the Queen Elizabeth room, for example, a rose brocade daybed near the fireplace is thought to have been used by Queen Elizabeth I during her visit in 1599, apparently this ornate room was one of her favorites. 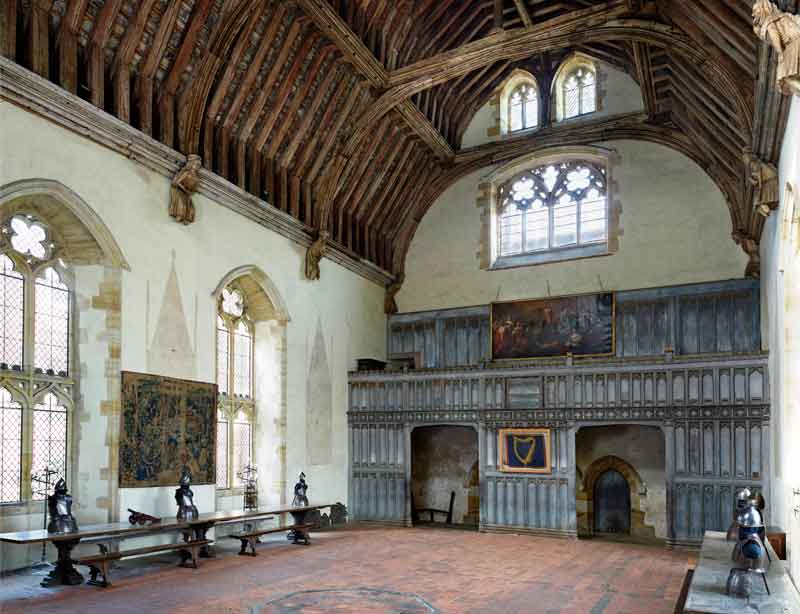 At the heart of Penshurst is the impressive Baron’s Hall built in 1341. It is considered by many historians to be one of the finest medieval halls in all England with its Spanish chestnut ceiling towering 60 feet overhead. This hall was hung with banners, filled with costumed actors and became the King’s banqueting hall during the filming of “The Other Boleyn Girl.” This was rather fitting as Henry VIII used Penshurst as a hunting lodge during the latter part of his reign.

Movie scenes were also shot in the magnificent 11 acre walled garden which actually existed during the Tudor period portrayed in the film. Numerous other period movies and TV specials such as “Wolf Hall” and others have secured permission to film here over the years.

Penshurst is a fascinating garden to walk with one room-like garden leading into another providing a chain of color and variety of vistas. The walkways with their magnificent flower borders become like gardens themselves, so there are almost twenty different gardens. We will describe eight. 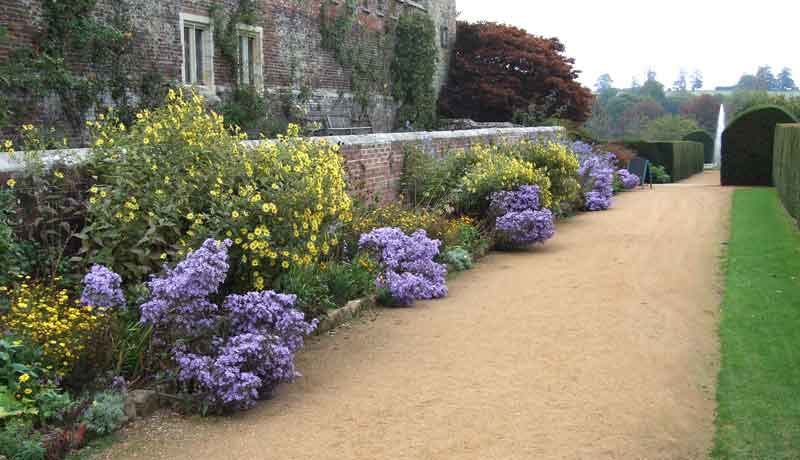 Perhaps the most spectacular on a summer day is the Italian garden, or Parterre, which is visible from the manor house windows. Masses of roses fill the formal geometrically shaped beds. The rectangular space is centered by a pond with a statue of a young Hercules in the middle. From here there is a good view of the south front of the house and the roses against the garden wall. ‘Queen Elizabeth’ and ‘New Dawn’ are two of the roses grown there. Towering yew hedges (Taxus baccata) with impressive scallop-shaped tops separate this room of the garden from the next.

Before moving on head gardener, Tony Wisemen, commented, “Penshurst Place has been known for centuries for its roses and apples, which between them make up the largest displays in the garden. There is evidence of apple trees grown at Penshurst Place since the 1340’s, and we still use them (apples from old trees) in our Garden Restaurant, the Porcupine Pantry Cafe, and wedding menus – local sourcing doesn’t get much more local than that!” 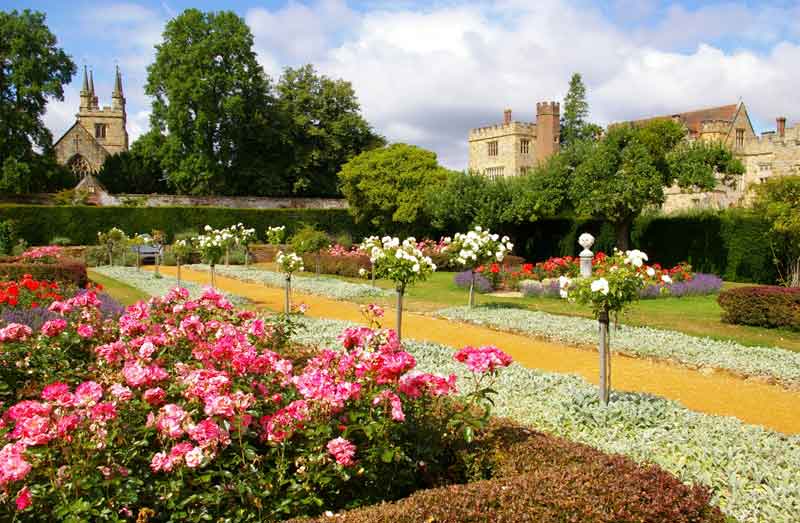 Wiseman explains that one of the challenges of such an historic garden is, “All of the stone work and walls in the garden are ‘grade 1 listed’ so we have to be very careful with them and cannot alter them in the least.”

Next are a set three enclosed gardens. The first is a fabulous rose garden with beds of pink ‘Anisley Dickson’ and ‘Anna Livia’ roses and two long beds of white standard roses. This is followed by the Lanning Roper Garden with a double border of mixed plantings that carry across the season. 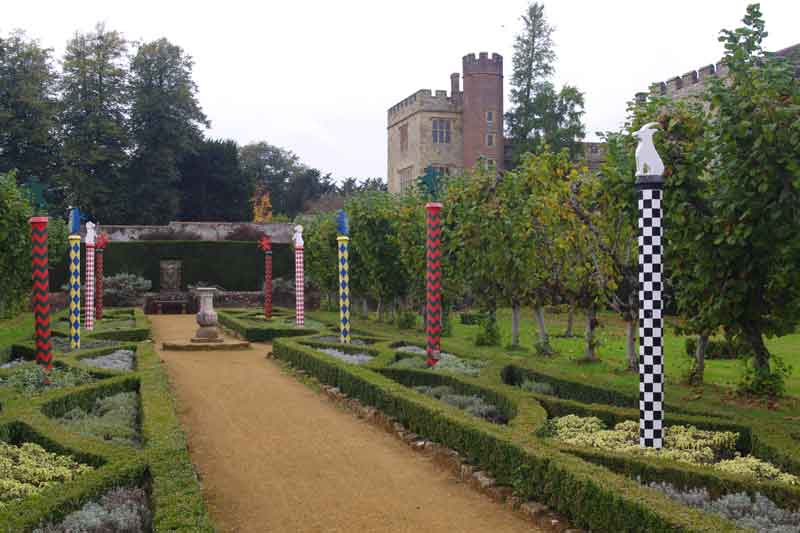 The third, and perhaps the most unusual, is the Heraldic Garden. Low edged beds partitioned by box hedges grow fragrant sage and lavender. However, towering above are ten brightly colored poles topped with heraldic beasts. They represent the Sidney family’s heraldic symbols, those of their ancestry and former owners. Among the animals is a rampant red lion, a white goat and a porcupine from the Sidney family crest.

Running past the end of the Heraldic Garden is the Jubilee Walk added in 2012. It honors the 60th anniversary of Queen Elizabeth II’s reign and is a vibrant mix of perennials and annuals interspersed with stone benches for resting and enjoying the view. 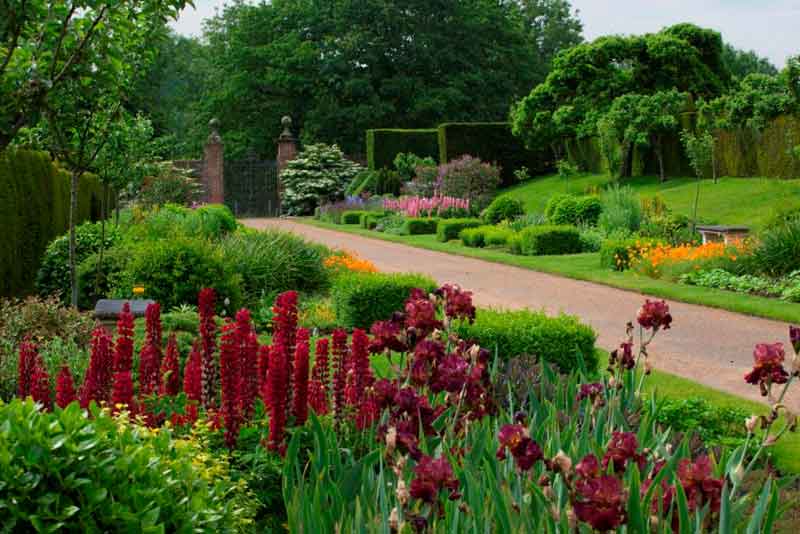 A large orchard and an equally large nut garden are under-planted with spring bulbs and every spring make a wonderful sight with blossoms above and below.

New for the 2018 season will be a double border next to the Italian Garden. It’s designed by George Carter, a specialist in geometrically inspired 17th century designs for formal gardens. The woodland trail is getting new plantings and a natural play area. They are also creating a new potting shed and plant area in the kitchen garden to propagate more of the garden that provides for the house and restaurants.

Final stop, before a coffee at the Porcupine Pantry, is the Union Flag Garden where a raised viewing platform helps visitors look out over the red, white and blue plantings in the shape of an immense Union Jack.

These immense gardens are tended by a team of eight, three of which are only part-time. Tony Wiseman, explains, “We are a working garden and have to ‘crack on’ even when we have visitors. That said we start at 7:30 every morning and get a lot of the jobs done that could be a problem with lots of people around before garden opening at 10:30. We are always happy to answer questions – as long as we can keep working as we do so!”

Wiseman continues, “For me my favourite part of the garden is the way it changes through the year from the bones being visible in winter to a full bursting look in the summer. As for garden features the Italian garden with its straight lines and history do it for me.” 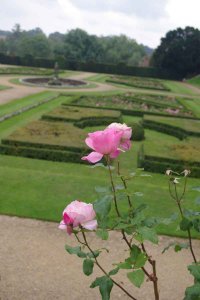 Tony’s Tip: Double digging roses
“Double digging is a process which involves digging down to twice the depth of a spade’s head (roughly around 2 feet) and is necessary to ensure the beds don’t become rose sick, a condition caused by growing roses in the same spot for many years.  By double digging we will improve the soil structure and drainage. We’ve also added farmyard manure into the trench to give future roses a good feed at the roots.”

Like the fictional Crawleys of Downton Abbey, the Sidney family has cared devotedly for their immense house and vast land for more than 460 years. At the end of our private tour it was a pleasure to meet Lady De L’Isle, the wife of present owner Philip Sidney, 2nd Viscount De L’Isle. She told us that one third of the building is open to the public. However, unlike Downton Abbey, she does not have a small army of servants. The housekeeping staff who keep up the public areas number only three. Additional staff co-ordinate public tours and the many lavish weddings, banquets and special events held at Penshurst Place.

Penshurst Place & Gardens is open late March through late October. Woodland hiking is available in the off season.

Hever Castle (a 15 minute drive from Penshurst) is a 13th century moated castle that was the childhood home of Anne Boleyn. It also has a very large formal  garden. Guided tours of the castle are available.

—
The Rob and Wendy Lindsay have been a published writing team for many years. Gardening comes naturally- Rob has always been involved with farming and Wendy is a natural born Gardiner (her maiden name.) They have recently downsized their half-acre garden to allow more time for travel and visiting other gardens around the world.