We weren’t surprised to find English-style herbaceous borders in New Zealand’s renowned Hamilton Gardens – the country has a Union Jack on its national flag, after all. However, stumbling upon a collection of gardens faithful to some of the world’s greatest botanical traditions was unexpected.

Our two hour drive south of Auckland to the gardens turned out to be a bigger and better experience than we could have imagined. The gardens here are grouped thematically. My husband and I started with the Paradise Collection, and very soon, Hamilton Gardens’ true genius became clear. 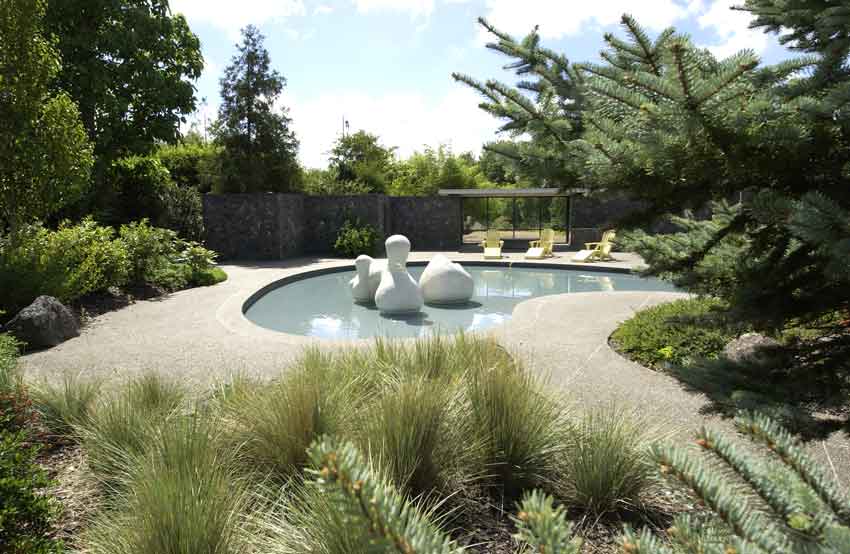 Signs pointed to the English Flower Garden, the Indian Char Bagh Garden, the Italian Renaissance Garden, the Japanese Garden of Contemplation, the Chinese Scholars’ Garden, and the Modernist Garden. And that’s just the Paradise Collection.

Can you imagine a museum of gardens? That’s the best way to describe Hamilton Gardens. In the 1980s, the Gardens’ Director, Dr. Peter Sergel, proposed the concept to the town council, and they went for it.

Before Dr. Sergel took over, the site had already come a long way. It was once a municipal dump overlying a much older Maori settlement.

In the past 30 years, Hamilton Gardens has grown and matured into a world-class botanical Eden. Telling the stories of gardens and people has created a diverse and engaging encounter and a unique chance to see many gardens on one site. 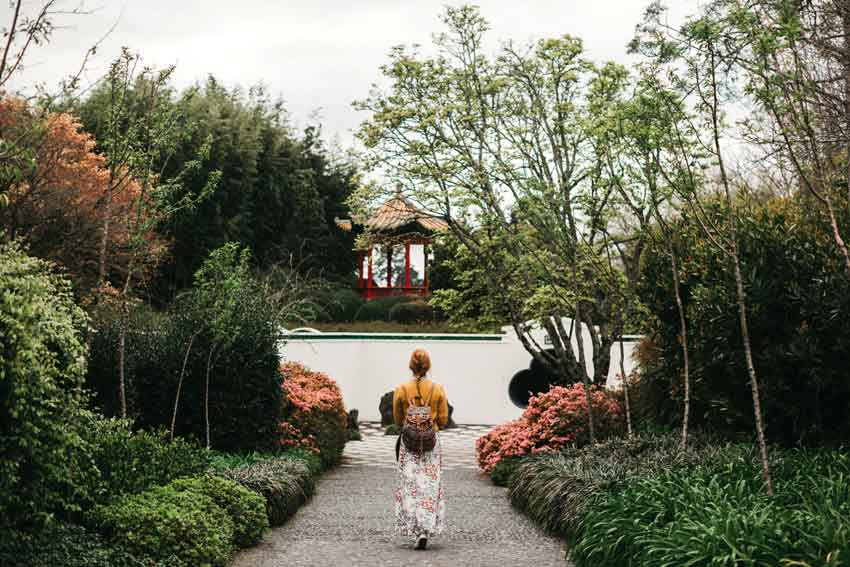 At the start of the day, we meandered through the foxgloves, bluebells, and other fairy hiding places of the tousled English borders, and then chose to explore the Chinese Scholar’s Garden. The black and grey paving stones here look like the sea. Rounded windows set into white walls offer glimpses of the forest beyond.

The skillful use of hard and soft materials to create distinct spaces within each garden makes the visitor’s meandering even more rewarding. Without walking very far, we moved from the scholar’s courtyard, across a quiet stream, and up to the hill top pavilion with its expansive view of the Waikato River valley. These days, there’s a forest below. Until the mid-19th century, there would have been traditional Maori gardens down there too, as we would later learn. 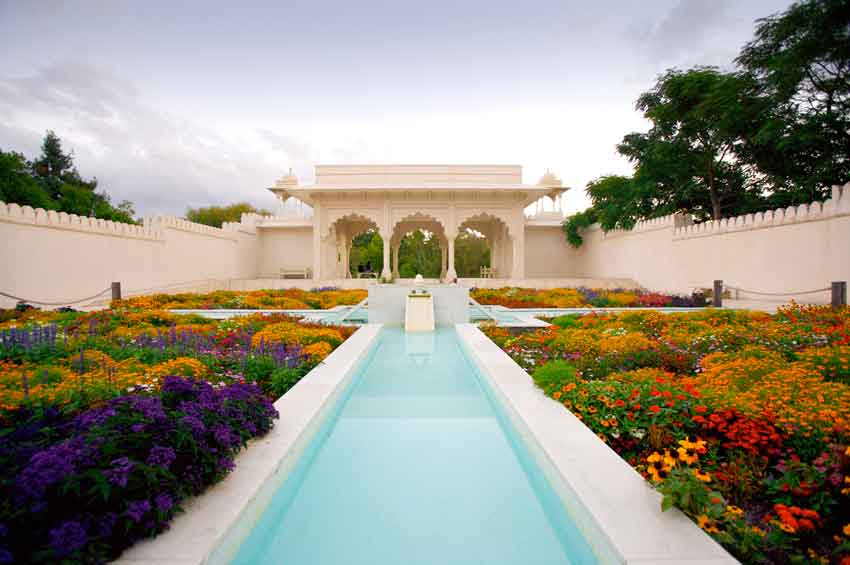 By the time we reached the courtyard of the Indian Char Bagh Garden, its geometric reflecting pools reminiscent of the Taj Mahal, the sun was getting intense. I wasn’t the only one to feel the heat.

Two young ladies in floppy hats squeezed into a shady corner beside me. After a little rest, we all took a short stroll to admire the orange and yellow floral outlines of the pools, while secretly wishing to cool off in the water. The young ladies lingered, waiting for their friends. 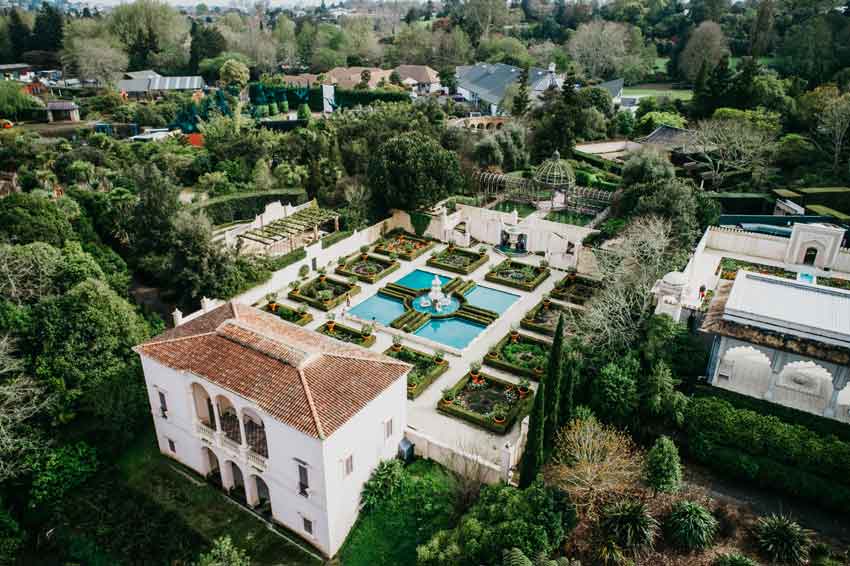 Leaving India behind, my husband and I ambled through the forest enjoying the welcome shade. Soon we had a prime view of the Italian Renaissance Garden. It put me in the mood for a glass of Chianti. An arched doorway and a vine-covered stucco wall conjured up the romance of Tuscany.

So far, each garden we saw was based on a well-known familiar type, but that was about to change.

As visitors to New Zealand, we were only starting to understand the history and culture of these islands as they were before the Europeans arrived. The next garden, called Te Parapara, is a collaboration between local Maori people and Hamilton Gardens. Here we saw some living history, all new to us.

The dry gravel crunched underfoot as we followed a path beside a low palisade made of pointed logs set vertically into the ground. The native forest behind the barrier is growing back after many years of disturbance. This area represents a place where the Maori would gather wild food.

An ornately carved gate ahead, called a waharoa, divides the natural setting from the cultivated part of Te Parapara. Stepping through it, we fell under the gazes of many Maori ancestors. Wooden carvings of their faces stare fiercely from tall wooden poles. These tekoteko, carvings of people, protect the space and link the traditions of the ages to the lives of people today.

Te Parapara re-creates the kind of gardens that were here before Maori life changed forever. The plants, tools, traditional wood carvings, ceremonies, and methods of cultivation all help preserve both the tangible and the intangible Maori heritage. 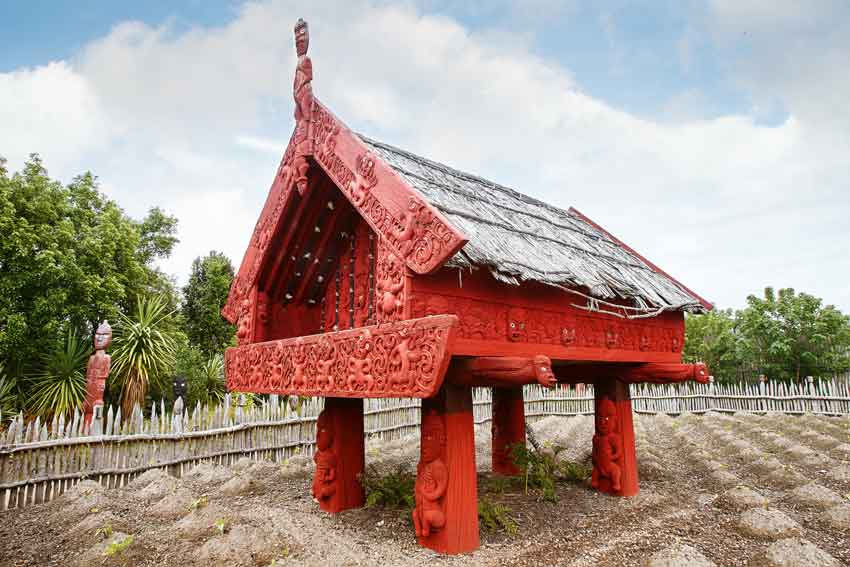 Raised on stilts in the inner garden, there’s a red building featuring some fine wood carving. Called a pataka, this is for storing the dried crop of kumara.

A sweet potato (Ipomoea batatas), the kumara is planted in late October. The tubers are harvested at the end of March. Kumara comes in many varieties and at Te Parapara they’re keeping some of the early, non-commercial types alive. This vegetable is served in all kinds of ways. New Zealanders aren’t equally enthusiastic about it, though. The first time I ordered it, the young woman behind the counter said, “It’s boring but you can get it everywhere.” I wasn’t sure how to take that, but after trying a few curries and salads, I’m a kumara fan. We had some kumara for our late lunch in the garden café before heading away from the unexpected and enticing place that is Hamilton Gardens.

Hamilton Gardens are open everyday. Admission is free. A drop in guided tour is given at 11am on Tuesday, Thursday and Sunday. For details, visit the garden’s website. 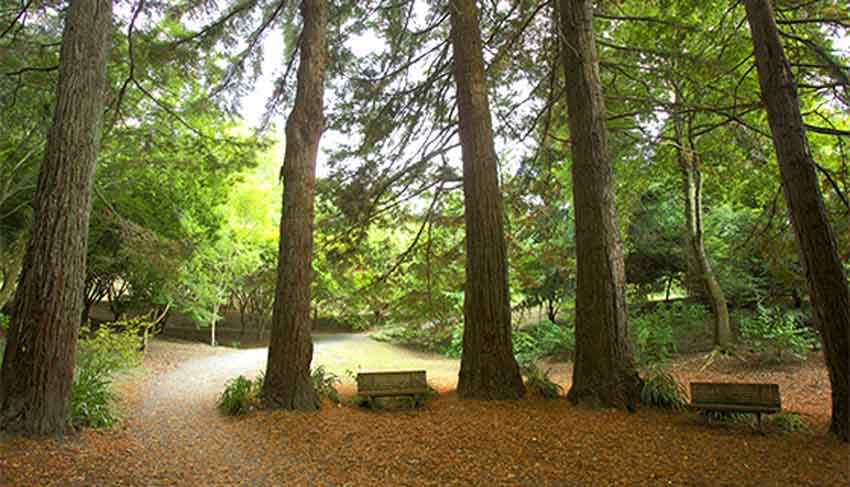 About 20 minutes from Hamilton Gardens by car, Taitua Arboretum is a public park where you can enjoy an hour or more of pleasant daytime walking in forest, meadow, and lakeside. Admission is free. In addition to the many species of native and non-native trees there, Taitua is a great place to hear and see some New Zealand birds.

In Hamilton, New Zealand itself: If you’re a Rocky Horror Picture Show regular, you need to see the statue of creator Richard O’Brien as Riff-Raff. O’Brien got the idea and wrote Rocky Horror when he worked at the Embassy Theatre here, which used to be where the statue is now.

Jill Browne is a travel writer, photographer, and blogger who lives in Calgary, Canada.