When much of the Northern Hemisphere is tucked in for a long winter’s rest, New Zealand is in the midst of summer and the height of the gardening season.

Most visitors to the country include a stop in Wellington, the capital city on the southwestern tip of the North Island. While the capital is known for everything from culture to coffee, a highlight is a visit to the Wellington Botanic Garden perched high on a hill above the city.

Start your visit with a ride to the top of the hill on the Wellington Cable Car, and then walk through the garden to the city below. Wear sturdy shoes as parts of the path are steep.

The garden covers 60 acres in a protected native forest with conifers and several major plant collections including camellias, hydrangeas and magnolias. Several don’t miss stops include the Māori native flax garden with almost 50 varieties of flax used for weaving and clothing. The Begonia House is overflowing with a large collection of tuberous begonias plus orchids, lotus and other tropical plants. The Lady Norwood Rose Garden is central to the garden with 111 formal beds each containing a different rose cultivar, some 3000 in total.

A showcase of southern hemisphere plant diversity is found in New Zealand. With so much to see in this garden, here are six don’t-miss plants specific to New Zealand to include in your tour. 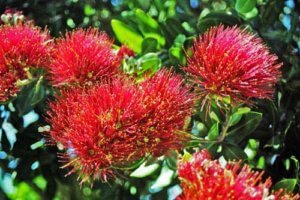 Pohutukawa (Metrosideros excelsa) is a broadleaf tree that grows to 66 feet tall and flowers from December to January – consequently it is called the New Zealand Christmas tree. The brilliant red of the flower is made up of a mass of stamens, gold-tipped with pollen. Pohutukawa is a word use by the native Māori translated as “(tree with) head dress of red feathers that grows near the sea.” 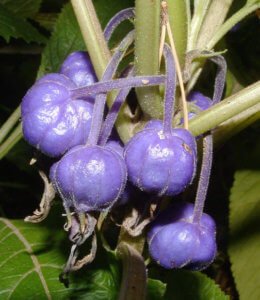 Koru (Colensoa physaloides) is also known as New Zealand hydrangea because of its leaf shape. The flowers resemble those of a salvia, but it is neither salvia nor hydrangea, but a member of the lobelia plant family. In autumn it has shiny, vivid, purple berries. 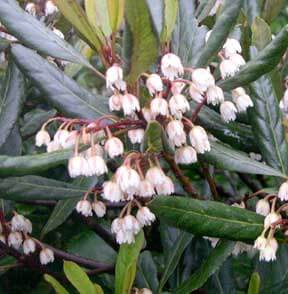 Hinau (Elaeocarpus dentatus) are found throughout the garden. A member of the olive family, hinau produce small blue-black fruit that are eaten and spread by birds and traditionally used by Māori as a medicine and for food. The small white flowers are beautifully fringed. 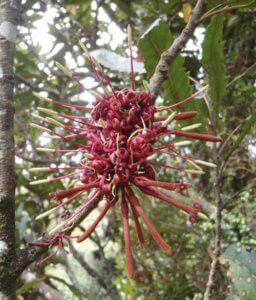 Rewarewa (Knightia excelsa) is recognized by its distinctive leaves, flowers and growth habit. Its scientific name, excelsa, means lofty or high and it can often be seen rising 65 to 100 feet above the forest. One of only two New Zealand members of the protea family, rewarewa has spidery, crimson-color flower spikes in late spring and summer.

The native tree daisy (Olearia chathamica) is more of a shrub than a tree and is also known as the cliff aster. It has flowers up to 1½ inches across, with distinctive purple disc florets. The leaves are glossy and toothed on top with white hairs underneath as a protective mechanism. O. chathamica is an at-risk species. 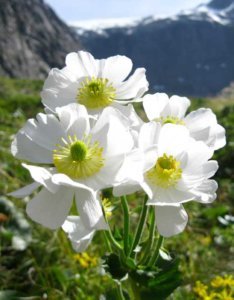 The Mount Cook lily (Ranunculus lyallii), actually not a lily but a buttercup, is the tallest of the genus. It is an alpine plant that comes from the South and Stewart Islands of New Zealand and is very difficult to grow away from its native habitat. Its three-inch white flowers appear from November to January.

The garden offers several self-guided walks with brochures available (including some in Braille) in the Treehouse Visitor Centre.

Before leaving the garden take time to explore the Bolton Street Cemetery when you reach the bottom of the hill. Dating to 1840, the cemetery is the city’s oldest and the final resting place for many of Wellington’s most notable figures. It also houses a heritage rose collection that blooms in November and December.

Wellington Botanic Garden has a nearby sister garden, Otari-Wilton’s Bush, dedicated to cultivating and conserving New Zealand native plants. Otari contains 1200 species, hybrids and cultivars, including nearly 40 percent of New Zealand’s at-risk species. It features a tree-top canopy walkway, an 800-year-old rimu tree and is a haven for native birds.

Across the street from Te Papa is the QT Wellington Hotel a luxury boutique property known for its quirky art collection in the lobby and variety of rooms from standard hotel to apartment-style.

Beverly Hurley is the editor of Triangle Gardener magazine in Raleigh-Durham-Chapel Hill, North Carolina. When she is not gardening, she loves to travel.