When defined by latitude alone, the tropics lie between latitudes 23 1/3 degrees, both north and south of the equator, or about 185 miles closer to the equator than latitude 26.

Regardless of the precise limits of this zone, it includes a huge swath of the earth’s warmer regions, from central Mexico, south to southern Brazil; southern China and India down to northern Australia; most of Africa, and vast stretches of ocean. Latitude 26 North also happens to cross South Florida, running from Fort Lauderdale to Naples, Florida.

The citizens of Naples chose this 3600-mile wide “Latitude 26 Zone” as the defining theme of their botanical garden. The Naples Botanical Garden (admission charged) was founded in 1993. Land was purchased in 2000, the master plan completed in 2006, and the garden officially opened in November 2009. To the casual visitor, it might seem that the garden had been there much longer, since many large specimen trees were brought in at considerable expense. 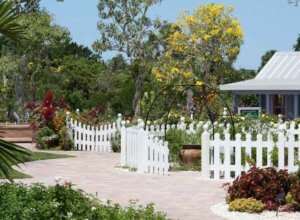 As you enter the garden, you’ll notice the dark staining on the siding of the visitor center. Planks were cut from reclaimed “sinker” cypress logs that came from the bottom of Florida’s Apalachicola River, naturally colored by the tannin-rich waters. The center has garnered a LEED Gold certification, in part because of harvesting rain-water in a 7,000-gallon tank where it’s held for irrigation.

You’re next stop might be the Children’s Garden, a delight even if you don’t have kids in tow. You can relax under “Chuck”, the Royal Poinciana tree, and check out the Cracker House. “Cracker” is term that has had many meanings over the years, from a braggart or joker in Elizabethan times, to rustic folk living at the edge of civilization in early America. In Florida it’s also been applied to the state’s cowboys, or cowmen as they prefer to be called. Now it’s often just applied to Floridians who have been in the state for several generations. 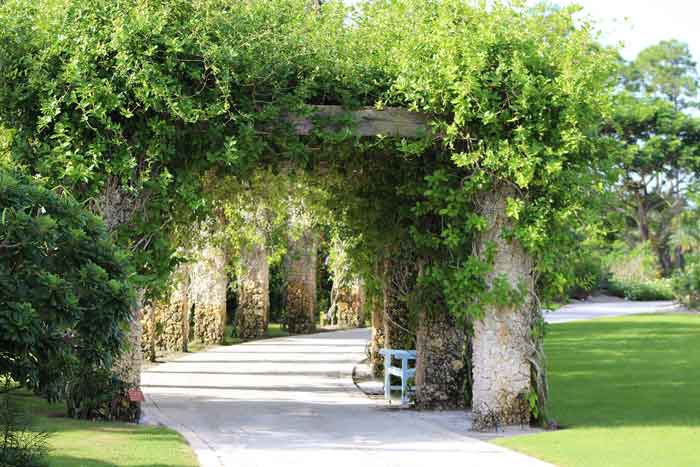 Nearby is the Caribbean Garden, showcasing the wide variety of ecosystems often found on a single island. Mountain forests on the islands’ windward exposure typically have lush rainforest growth, while scrub and cacti are found on the dry leeward side. Among the wide variety of plants in the Caribbean Garden are the plumerias, also known as frangipani. Naples Botanical Garden is home to the National Plumeria Collection, with over 500 species and varieties.

Crossing over the River of Grass will bring you to the Florida Garden, reflecting the diversity of plants found in the Sunshine State, and including trees rescued from destruction. A stream and cascade remind you that Florida has six natural waterfalls, the highest dropping seventy feet. 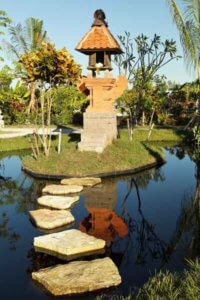 Heading back toward the visitor center, you’ll pass through the Asian Garden. A highlight is the Balinese temple ruin and plaza, surrounded by banyan trees, bamboo, and edibles such as lychee, jackfruit and starfruit. Designer Made Wijaya, born in Australia but “naturalized” in Bali since 1973, brought his fascination with this island’s culture and traditions not only to this garden but also to over 600 other gardens throughout the tropics.

Follow the boardwalk through the Water Garden, with water lilies and other colorful plants reminiscent of Monet’s garden. This garden features a soundstage and performance lawn, one of Naples’ best outdoor concert venues.

Finally, if you want a sample of wild Florida, you can stroll The Preserve, a 90-acre sanctuary with mangroves, slash pines, upland scrub and brackish marshes. The preserve is home to more than 300 native plant species, as well as eagles, otters and the gopher tortoise. A birding tower allows you to watch for some of the 150 species that have been spotted here.

As you leave don’t forget to visit the Shop in the Garden, and perhaps enjoy a casual meal in the Fogg Café.

The Naples Botanical Garden typically has special exhibits during the winter season. From December 3, 2016 through April 23, 2017, Origami in the Garden will be appearing, featuring metal sculptures by Kevin Box, as well as works by other artists.

Natural areas, as well as the arts and culture, abound in the Naples area. About 40 minutes northeast of downtown is Corkscrew Swamp Sanctuary, owned by the Audubon Society (admission charged). A 2.5-mile boardwalk takes you through pine flatwoods, wet prairie, a marsh, and then into the largest old growth Bald Cypress forest in North America. 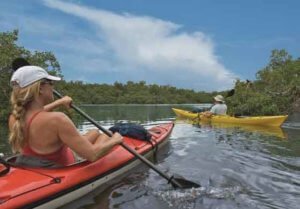 Rookery Bay National Estuarine Research Reserve is about 20 minutes southeast of downtown Naples, just of U.S. Highway 41 (admission charged to the Environmental Learning Center). Tours are offered by kayak and boat (fee); you may also bring your own kayak or canoe to explore the mangroves.

Artis-Naples is home to the Baker Museum, as well as the Naples Philharmonic, featuring a wide variety of performances throughout the season.

If you’ve just left the Naples Botanical Garden after a full day and need something to eat, try either the Taqueria San Julian (authentic Mexican) or the Real Macaw (Caribbean). Both are on Bayshore Drive, not far from the Garden. In downtown Naples, the Dock at Crayton Cove is right on Naples Bay; the Old Naples Pub is in the heart of the Old Naples shopping district.

For accommodations, the Bayfront Inn is on the Gordon River and an easy walk to the 5th Avenue shops; in the heart of this area is the posh Inn on Fifth.

For more information about the area, contact the Naples Marco Island Everglades CVB.