Guests are never far from flowers at the Grand Hotel on Mackinac Island in Michigan.

The most memorable, perhaps, are the brilliant red geraniums that line the hotel’s famed 660-foot front porch, touted as the world’s longest.

Planted in more than 260 white boxes, some 1,600 of the elegant Americana Dark Reds greet those who come to stroll along the historic porch. For many visitors, relaxing in one of the long line of white wooden rocking chairs, sipping tea or cocktails and admiring the view of the Mackinac Bridge is a highlight of this northern Michigan island, where cars are banned and horse-drawn carriages evoke a step back in time. 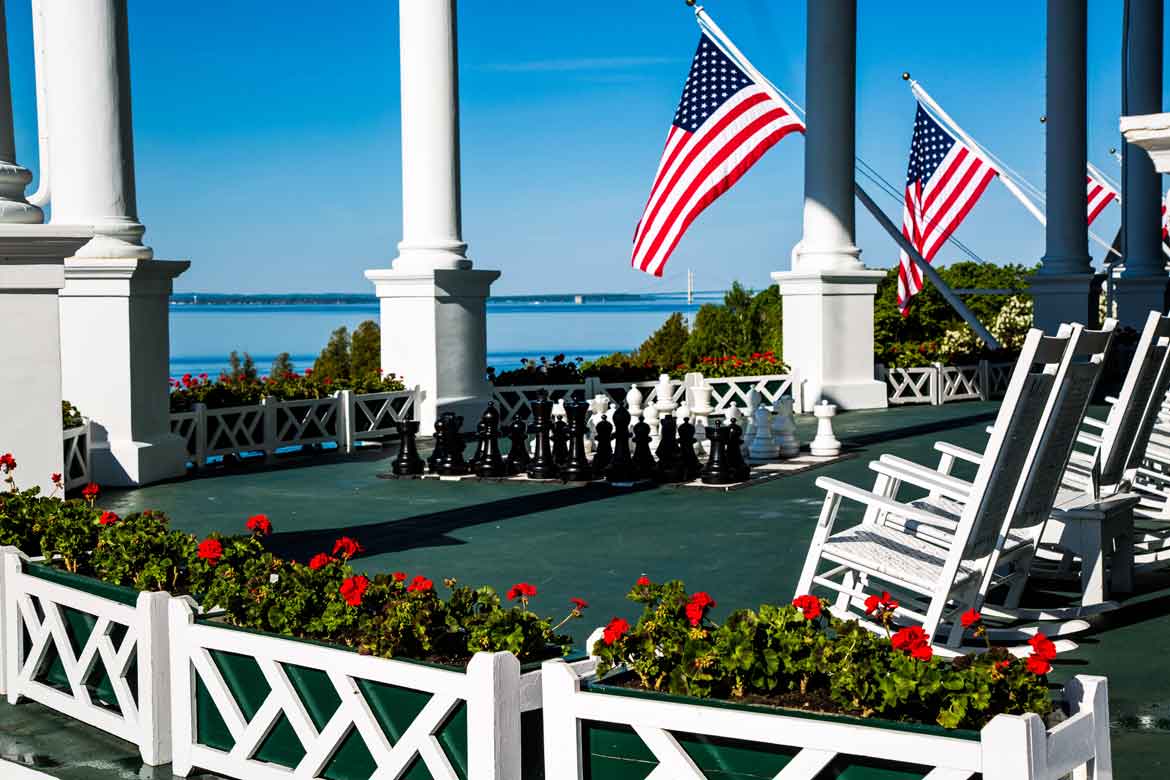 Another 955 geraniums – for a grand total of 2,555 this season – show up in the Geranium Bar inside and elsewhere around the hotel, complementing the bold black carpeting patterned with red geraniums and grass-green leaves. As an added touch, geranium-scented toiletries are featured in the hotel’s 393 rooms. 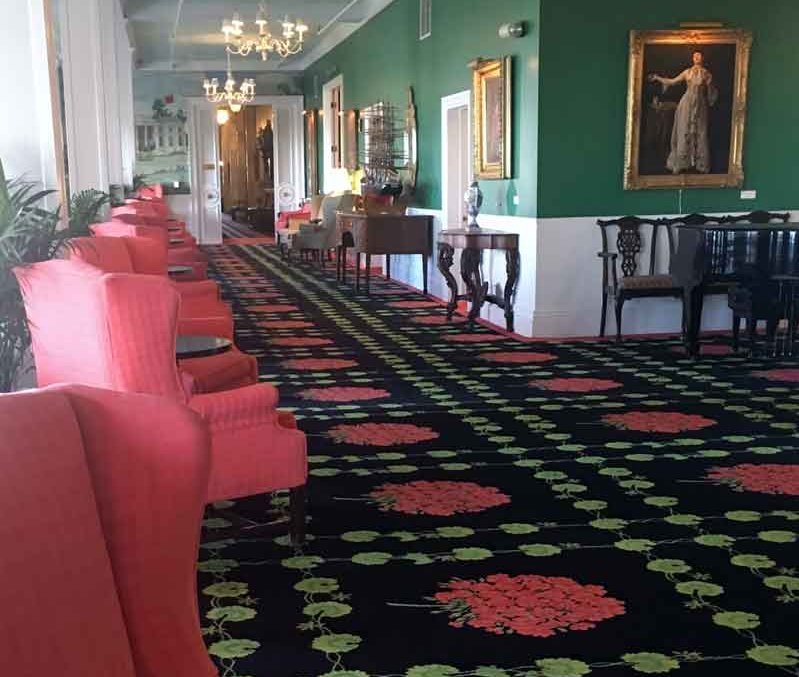 Red geraniums, the Grand Hotel’s signature flower, star in the bold carpeting in the long parlor of the Grand Hotel on Mackinac Island – Susan R. Pollack

“Geraniums love the weather here – the cool nights, clear air and moderate temperatures, and the amount of sun,” says Mimi Cunningham, the hotel’s vice president and a third-generation member of the Musser family that has owned the Grand Hotel for 85 of its 130 years. “They’re so American and so summer – I think they’re a pretty great choice for our signature flower.”

But while the Grand’s red geraniums take center stage, more than 125,000 bedding plants are showcased in its various gardens. “We have at least 10 gardens of substance,” says Cunningham, describing the sprawling layout as the Grand Hotel’s take on an English garden. In addition to the classic geraniums, visitors can see over 150 varieties of flowers during a single visit, including roses, peonies, coleus, garden heliotropes, cosmos, lilies, daisies, dahlias, and snapdragons, all maintained by a 12-member gardening crew. 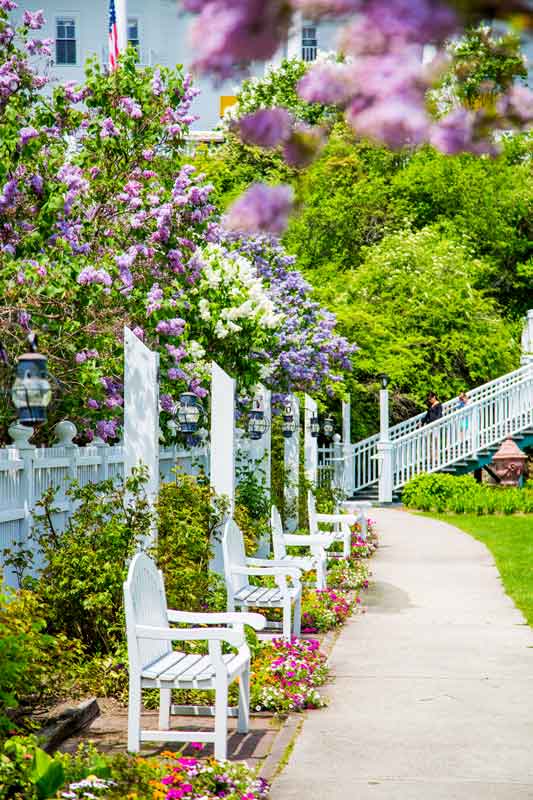 Lilacs in bloom along a walkway / The Grand Hotel

Throw in nearly 21,000 tulips and 12,750 daffodils and colorful blooms are guaranteed throughout the Grand’s May-October season. As a bonus, the hotel grounds are punctuated in late spring with bursts of lilacs in shades of purple, white, and fuschia, including some purportedly over two centuries old. Thriving in the island’s well-drained, limestone-rich soil, they’re among thousands of Mackinac Island lilacs that are celebrated every June in a 10-day festival that just marked its 69th year.

From the Grand’s white colonnaded porch high on a bluff, guests look out over the Tea Garden, with its huge expanse of lawn, pretty English fountain, and recently-installed stone wall, backed by a grove of white cedar and maple trees. On one edge, a large topiary of a carriage and a pair of horses, named Pete and Moss, is a popular Tea Garden photo stop. Opposite, in front of the hotel, Wildflower Hill is in the process of being replanted as the Grand moves to increase perennials and decrease some of the labor-intensive annuals that, in some years, are not all planted until the 4th of July. 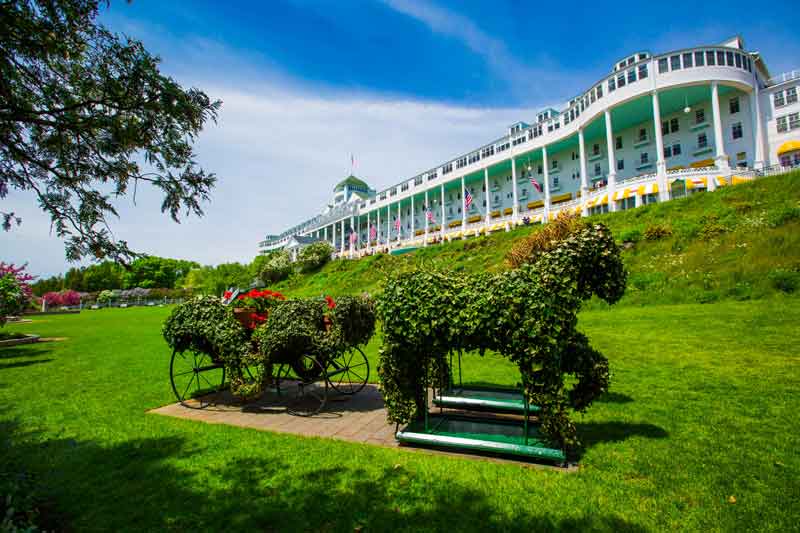 The topiary horse and carriage / The Grand Hotel

Adjacent to the Tea Garden, the Wedding Garden is the setting for about a third of the 150 nuptials each season at the Grand, according to Cunningham. “The Wedding Garden is primarily white, with a ton of hydrangea,” she says. “We’ve slowly added a little blue: monkshood, which is tall, and a lot of lady’s mantle, which is pretty, lacy, and limey green.” Pink rugosa roses, also known as beach roses, add to the mix.

To reach the gardens, hotel visitors descend 79 steps, purposefully designed short rather than steep to make it easier for Victorian women in long dresses, and continue along the Rose Walk. It stars pink Knock Out and Carefree roses along a white picket fence and white benches. John Cabot roses climb the lamp-posts.

One of the Grand’s newest additions, at the base of the stairs, is the small Tapestry Garden. Based on a needlepoint design by Kaffe Fassett, it’s planted with peonies, roses, parsley, ornamental cabbage, pansies, ivy, and French lavender. A framed and enlarged photo of the design, needle pointed by Cunningham’s mother, Amelia, hangs on the garden trellis.

From the main gardens, visitors wander to the Pool Gardens, where snapdragons, peonies, and other blooms evoke what the Grand’s new head gardener, Laura Fontaine, calls “a happy, party feel.” They accent the heated, 220-foot-long, serpentine-shaped Esther Williams Pool, which takes two days to fill with 330,000 gallons of water. It’s named for the actress, a competitive swimmer, who starred in the 1947 movie, “This Time for Keeps,” filmed at the Grand Hotel. 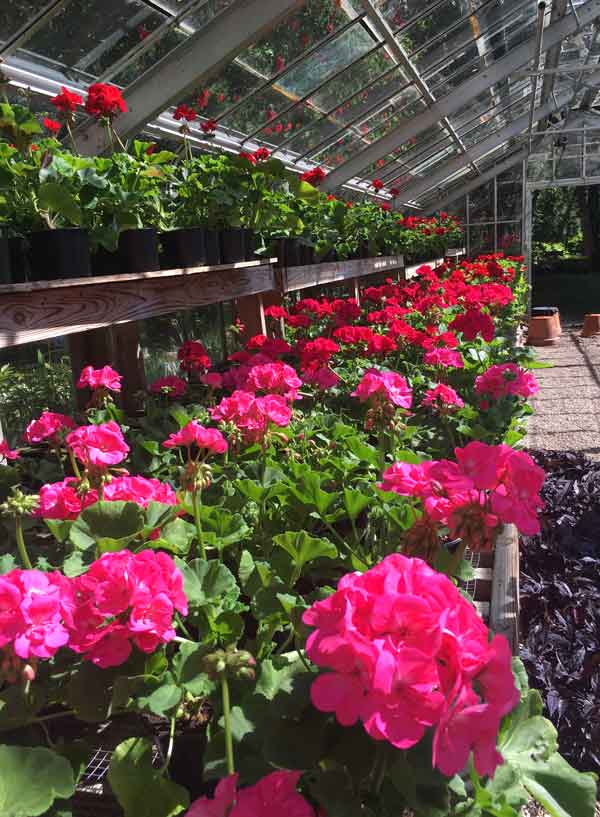 Tucked away in the nearby trees is the hotel’s greenhouse, filled mainly with geraniums, including Americana Pink, Maverick White, and Cherry Rose varieties in addition to the prized Americana Dark Reds. Daytime visitors are welcome.

In a secluded grove beyond the pool and gazebo is the Labyrinth, composed of Mackinac stones collected on a nearby beach by a hotel gardener, plus myrtle, ivy, Irish and Scotch moss, sweet woodruff, and pachysandra. Under a canopy of pine and birch trees, visitors can hear the sounds of chirping birds, the clip-clop of horses, and, occasionally, Lake Huron’s lapping waves.

Back up at the hotel, other plots include the Front Street Gardens abloom with annuals and an English Niche culinary garden with herbs and edible flowers including nasturtiums, variegated mint, violas, fennel, lemon thyme, lavender, carnations, chamomile, English daisies, oregano, bee balm and borage.

The Grand’s Triangle gardens, along the much-photographed walkway leading up to the hotel, are head-turners. 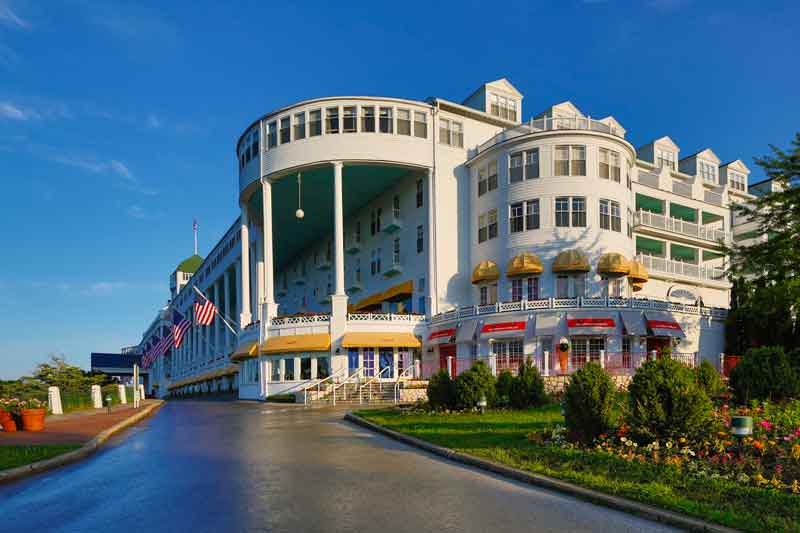 Planting is always done in mid-October, but pulling the bulbs is different every year thanks to what he calls northern Michigan’s “delightfully inconsistent” weather. This year, workers removed the tulips on June 5 and began prepping the Triangle Beds for planting the annual designs, which change yearly.

“I always have to order the bulbs four months ahead of planting to ensure we’re guaranteed these large quantities,” Butterfield says of the challenges of gardening on an island where supplies arrive by boat and are conveyed to the Grand by horse-drawn drays and the occasional bicycle.

The crew also plants daffodils throughout the grounds every season. Of the 12,750 daffodil bulbs ordered last fall, about 4,000 were planted in Sadie’s Ice Cream Parlor Garden near the Triangle Gardens and 6,000 on Wildflower Hill. The rest grace The Jewel Golf Course.

It’s all in keeping with the Grand Hotel’s mission to achieve, as Butterfield puts it, “multiple peaks in the gardens through the season to make sure there’s something outstanding for all to see.” 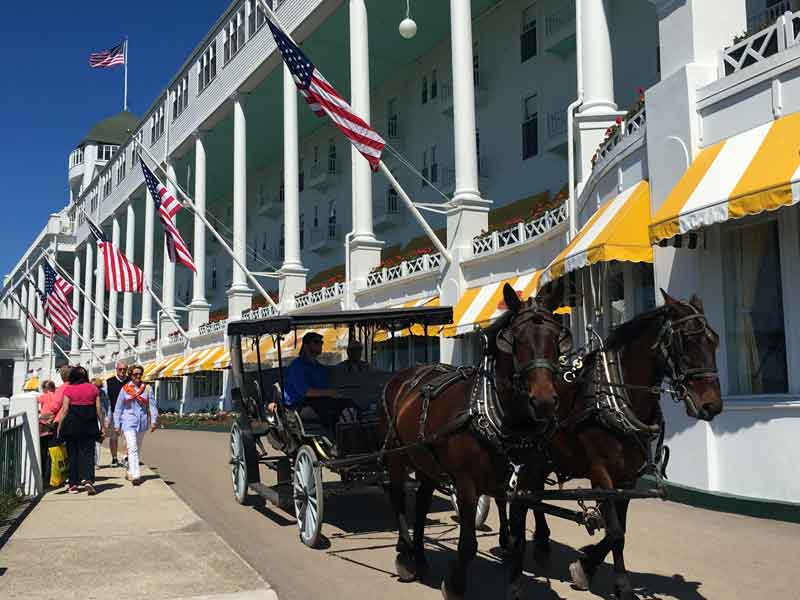 Built in 1887 and celebrating its 130th anniversary on July 10, the Grand Hotel has welcomed five U.S. presidents and countless celebrities. The 1980 film, “Somewhere in Time” starring Christopher Reeve, Jane Seymour, and Christopher Plummer, was filmed on location at the Grand; the movie has a huge following and fan club that meets yearly at the Grand in October. For rates, reservations, and dress code details, check www.grandhotel.com. Special packages are available.

Garden tours: One-hour tours, free to hotel guests, are offered at 10 a.m., Monday, Wednesday, and Friday until the week before Labor Day. Non-guests who pay a hotel admission fee may join regularly scheduled garden tours and stroll the porch.

Geranium giveaway: Guests attending the annual “Close the Grand Weekend”  leave with a free geranium from the porch planter boxes. 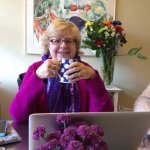 Veteran travel journalist Susan R. Pollack lacks a green thumb but enjoys tiptoeing through tulips, smelling roses and visiting public gardens on her travels. Her travel stories and photos have appeared in publications including the Dallas News, Toronto Star, Delta Sky magazine and many others. A former 36-year reporter for The Detroit News and is the copy editor for SecondChanceTravels.com.