It’s said that Ponce de León discovered the Fountain of Youth in St. Augustine in the 16th century. But garden lovers traveling here today will quickly discover that St. Augustine has another claim to fame – it’s a city of gardens. Actually, the city is a garden.

Sabal palms, live oaks draped with Spanish moss, and colorful plantings of annuals, perennials, and tropical plants line the streets and narrow lanes in this oldest city in the United States. Exploring St. Augustine means a joy filled jaunt where gardens greet you at every turn from its landscaped private homes to its top tourist attractions. 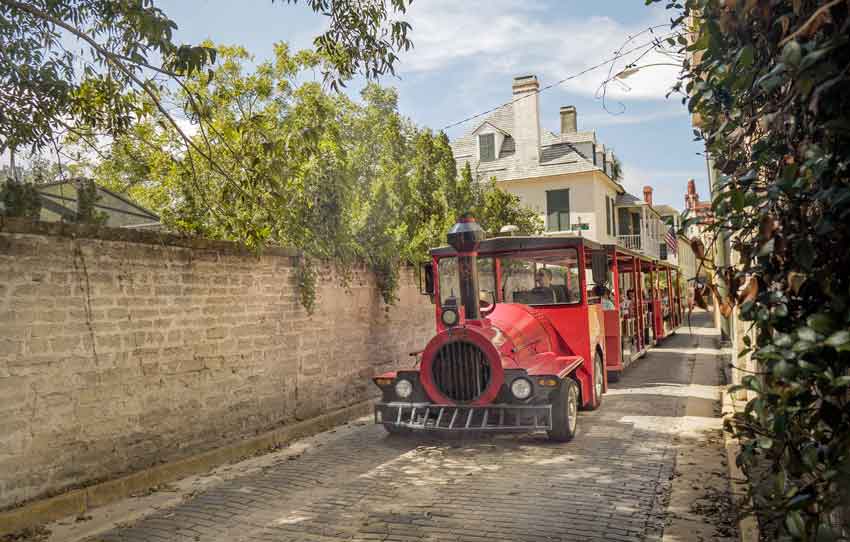 An easy way to see the city is on one of the trolley tours. The Red Train offers a one hour narrated tour of city sights. The Old Town Trolley includes some two dozen on and off stops that take you to the city’s main attractions. While riding either of these you will learn about the city and its extensive history dating back to the 1500s. It’s also a colorful ride where you will see the Spanish influenced architecture, remnants of the city’s original fortress gates, walls built of coquina, and gardens scenes like the drive down Magnolia Avenue lined with stately live oaks dripping with Spanish moss. Have your camera ready. Better yet, the Fountain of Youth Archaeological Park is on this avenue so before stepping inside the park to taste the waters from the famed spring take a leisurely walk down the avenue to see these stately trees.

This area of Florida was already inhabited by native peoples by the time of Ponce de León’s arrival at the Timucua village where the Fountain of Youth park is now located. The park’s exhibits interpret several periods of history with recreations and demonstrations to step you back into the early days of St. Augustine. Don’t miss the peacocks, a flock (or properly called a muster) that has grown to almost three dozen that are allowed to freely wander the grounds.

Walk next door or hop on the trolley to visit the Mission Nombre de Dios. This site of the first documented Catholic mass in the U.S. in 1565 includes a church and a small museum. The main part of the mission is the park like grounds where you can stroll on a path lined with lovely garden plantings past the Stations of the Cross and a small chapel. The tall cross on the mission’s shore of the Matanzas River is the tallest stainless steel cross in North America, placed there in 1965 to commemorate 400 years of faith in St. Augustine.

Back on the trolley, you’ll go past the oldest resident of St. Augustine – the “Old Senator” live oak. The tree is over 600 years old and was already 100 by the time Ponce de León landed on this section of the Florida coast. You can see the tree in the courtyard of the Villa 1565 hotel on San Marco Avenue.

Stay in a Garden in St. Augustine

St. Augustine has a good mix of hotels and small motor lodges but the stand out place to stay is The Collector Luxury Inn & Gardens. 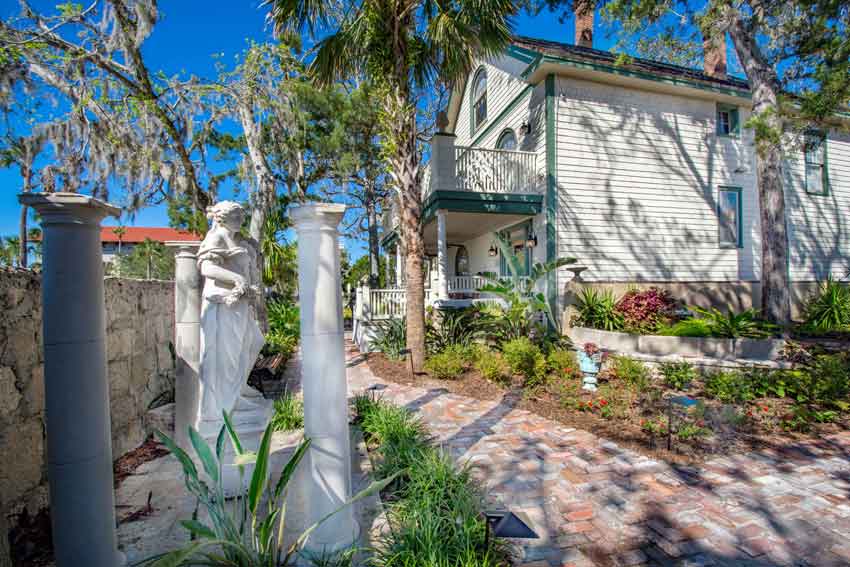 This assemblage of nine historic homes dated from 1790 to 1910 is set on one city block packed with St. Augustine history and an easy 10-minute walk to the heart of the city. A move from Michigan in the late 1930s brought Kenneth Dow, the only child of a wealthy family, to St. Augustine. He bought one of these original homes for his residence. His love of collecting antiques created a need for storage, so Dow eventually purchased adjacent homes to house his possessions. When he married in 1955, his new wife Mary also used the homes to store her portrait collection – some 1,200 that she owned.

In 1989, following Mary’s death three years earlier, Dow decided to give it all away, including the nine houses, to the Museum of Arts and Sciences in Daytona Beach. Not sure what to do with such a donation, the property languished for years until 2014 when David Corneal, a retired attorney, purchased the nine houses from the museum, renovated the buildings, and turned the property into the most amazing luxury inn you will ever encounter.

Each house has the feel of a boutique inn but with historic elements kept intact on the outside and updated with modern conveniences on the inside. With only 30 guestrooms, each house has just a few rooms or suites, making you feel as if you are staying in your own private escape. 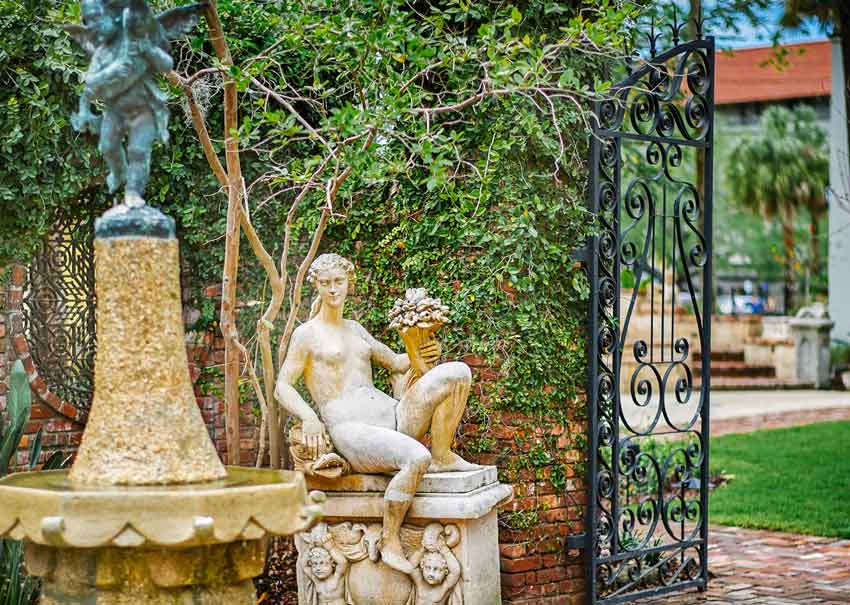 Statues at The Collector / FloridasHistoricCoast.com

Outside, the garden setting includes brick lined paths created and hand laid by Dow, fountains, a plunge pool created by Dow, and numerous ornamental iron pieces and classic statuary from Europe all tucked into small courtyards and along the pathways. Neatly trimmed hedges of yews and towering palms intermingle with colorful plantings of azaleas, roses, hibiscus, birds of paradise, and seasonal flowers to create this garden oasis. Of special note are two towering trees on the property – a 200 year old magnolia and a 250 year old camphor (Cinnamomum camphora).

You’ll want to spend as much time outside as you can. In the center of the property is The Well bar (this building used to be the city’s first two-car garage) flanked by outdoor seating, fire pits, and a grassy lawn. Order a botanical-infused drink and enjoy the garden atmosphere. Guests staying at The Collector can take a guided tour of the property offered at 10am three days a week. Other amenities of this adults-only property (you must be over 16) include live music on Friday nights in warmer weather and the free use of bikes to explore St. Augustine.

St. Augustine’s main public garden is a state park – Washington Oaks Gardens State Park. Crossing over the Lion Bridge, it’s an easy 30 minute drive south along the coast. Originally part of the Bella Vista Plantation from 1818, then a winter retreat of future owners, the land became a state park in 1964. Stretching from the Atlantic Ocean to the Matanzas River, the park includes trails, a shoreline of coquina rock formations (a mix of sand and shells), picnic and fishing areas, and the winter house and gardens of Owen D. Young, who helped found the RCA Corporation, and his wife Louise. 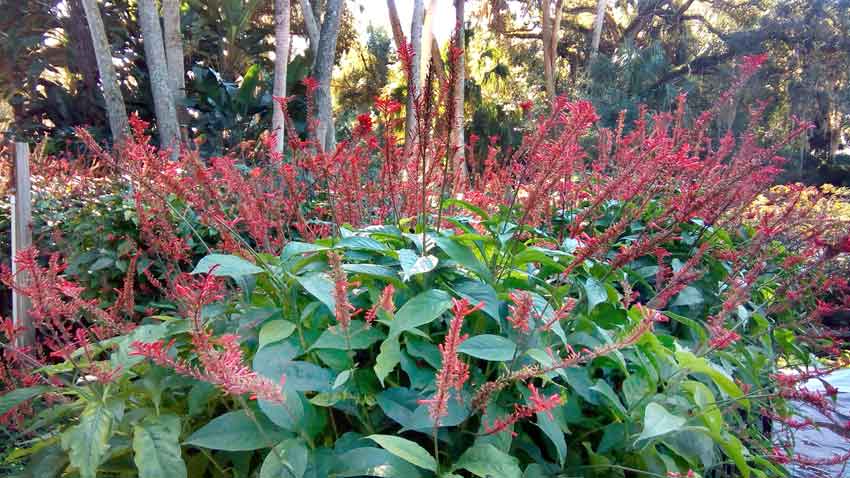 Paved and gravel paths wind through these gardens tucked into the coastal forest common in this part of Florida. Massive 300 year old live oaks and palms are throughout. Garden sections include small ponds with fountains, plant lined walkways, a terraced rose garden, and swaths of native and exotic plants including native crinum, varigated cannas, cast iron plants, firebush (Hamelia patens), ferns, and stands of bamboo. Pick up a picnic lunch from The Floridian in St. Augustine to enjoy in these gardens.

On your way back to town, stop in Marineland for a walk on its ocean side elevated boardwalk. Closer to town is the St. Augustine Lighthouse, set in a coastal hammock of trees that make up this unique ecosystem thick with foliage and interesting plants. Most notably is the coontie cycad (Zamia integrifolia) you will see here, the only cycad native to Florida. This fern looking plant with stiff evergreen leaves was used by native peoples to make a starchy flour for cooking – note the stem is poisonous if not prepared correctly so don’t try this at home. The lighthouse complex has several structures including the Keepers house and garden that you can tour, and, of course, the 165 foot tall lighthouse that you can climb. Remember, it’s 219 steps up and then down a spiral staircase in this 7th tallest lighthouse in the U.S.

WHEN YOU GO TO ST. AUGUSTINE:

The Plaza de la Constitución is the heart of the historic district. The center of the block long Plaza is anchored by nearly a dozen moss draped live oaks. Spanish architecture style buildings with shops and restaurants, the Cathedral Basilica, and the historic Governor’s House are adjacent to the Plaza. 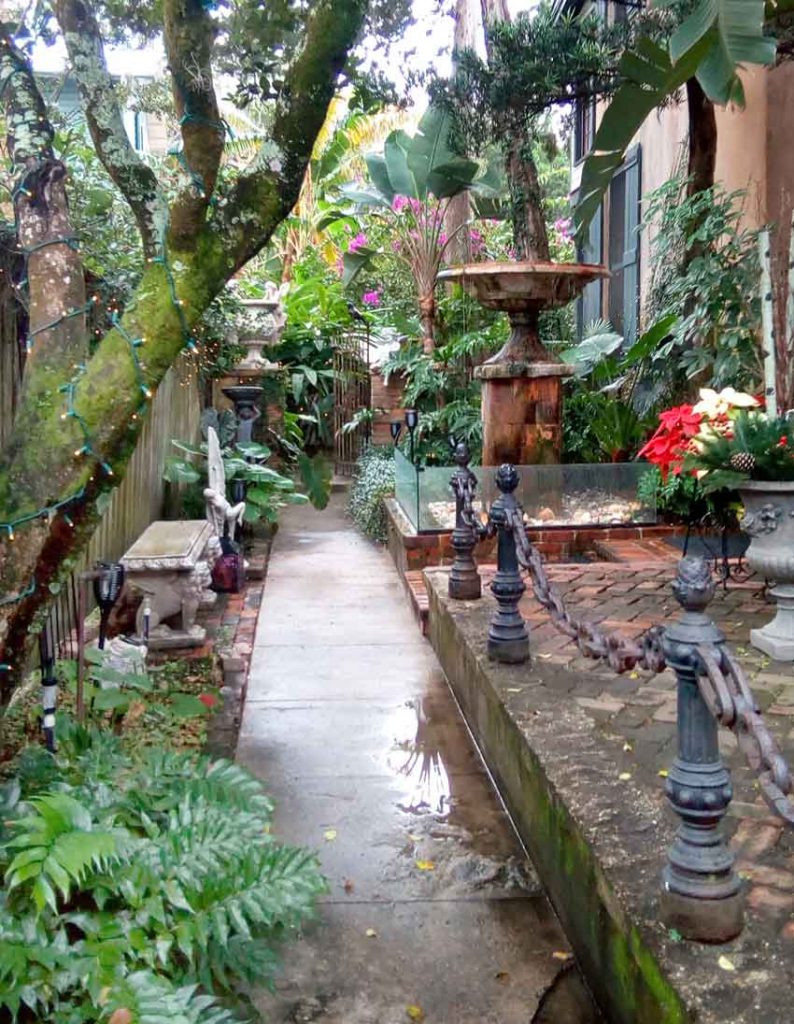 A look through a garden gate in St. Augustine / Beverly Hurley

Make a plan to explore the adjoining streets like St. George Street with its shops, Aviles Street – the oldest street in the nation – with unique restaurants, art galleries, and the historic Ximenez House, plus dozens of side streets lined with historic homes and gardens. Many of these streets are cobblestone and brick so proper footwear is encouraged.

Not far from the Plaza is the Lightner Museum housed in the iconic former Hotel Alcazar built in 1888 by railroad magnate Henry Flaglar. Its collection includes fine and decorative 19th century art plus a schedule of special exhibitions including the current one on stained glass. Flagler College is another landmark in St. Augustine, also housed in a former hotel built by Henry Flagler. Both have strong Spanish influenced architectural styles. Close to the college, Flagler built Memorial Presbyterian church in 1890 in memory of his daughter who died tragically. The Venetian Renaissance structure has several garden areas plus a mausoleum where Flager, his wife, and daughter are interred.

The Castillo de San Marcos perched high above the river was built by the Spanish to defend Florida. Completed in 1695 after 23 years of construction, today it is part of the National Park System – though it still flys the Spanish flag when it is open. Notice the masonry walls are built of coquina stone so these could easily be patched after a day of battle. The fort was originally painted red and white – the colors of Spain – and you can still tints of red on some of the bastions. The grounds and the top of the Castillo offer panoramic views of the river to the ocean.

Enjoy a different waterside view on the St. Augustine Scenic Cruise on the Victory III. This 75 minute cruise on the Matanzas River is an enjoyable way to see the skyline, the waterfront homes, and the foliage dense shores of Anastasia Island, a barrier island between the city and the ocean.