When Angela Villa was a child growing up in a conservative household in south Florida, her parents didn’t allow the kids to eat chocolate. So what does she do as an adult in Hawaii? 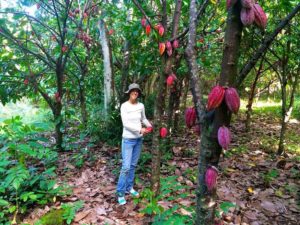 Angela is a chocolatier and co-owner of Garden Island Chocolate on Hawaii’s Kauai island. She and her husband, Koa Kahili, were the first on the island to grow and harvest cacao and turn it into chocolate for commercial purposes. Three mornings a week, they lead cacao plantation tours teaching mainlanders and chocolate lovers the delicate art of growing cacao.

Cacao grows in a narrow region of the world about 15-degrees either side of the equator. Mexico and other Central American countries produce the majority of chocolate, followed closely by West African countries. Hawaiians have grown cacao for more than 200 years. Kauai, which has about a dozen kind of cacao trees, is the most northern place on the planet where the trees grow.

So Angela makes the final chocolate product that we all love, but Koa is the farmer and scientist that nurtures the plants and leads the tours. Although he has multiple college degrees, including a master’s degree in Polynesian/South East Asian Art History from the University of Hawaii, he is self-taught in the field of chocolate.

A cacao plantation, we learned very quickly, is not rows and rows of cacao trees. The plantation we visited was about 20 acres filled with Jackfruit and banana trees, acai palms and numerous other blooming plants. Mimosa trees and spice trees such as cinnamon and tamarind grew here and there. And tucked in under and around it all were cacao trees, which are designated understory trees.

“Cacao is happiest when it is surrounded by other trees,” said Koa

“It’s a very fragile plant so companion plants are necessary to protect it from heavy wind and rain.” Those companion plants also ever so gently influence the flavor of the resulting chocolate, as does the mulch. Citrus peels, vanilla vines and the chaff of cacao pods, along with the shells of cacao beans, make great mulch. 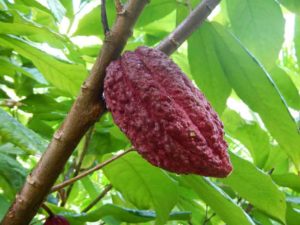 Cacao trees are most productive when they are at least five years old. By then, they’ll produce about 100 cacao pods. There are about 30 beans per pod. It takes 400 beans to make a pound of chocolate. Angela and Koa produce about 800 pounds of chocolate a year, so you do the math on that.

A mature pod can be yellow, orange or a brick red and is about the size and texture of a football. We had a New England Patriots fan on our tour, so our discussion included the size of a deflated cacao pods. 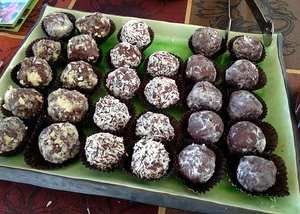 The cacao harvest in Hawaii runs between December and February. Our tour was in November and some of the pods were almost ripe, so Angela and Koa showed us how to check by scraping the outside of the pods with our fingers.

Garden Island Chocolate Tours last about three hours and includes a sufficient amount of time for tasting chocolate and drinking hot chocolate. Tips: Bring a raincoat and closed toed shoes because the tours go on rain or shine. You’ll be walking through wet grass and uneven surfaces so good shoes are needed. You might also want to stuff plenty of tissues or “Wet Ones” in your pocket. Chocolate tasting at the end of the garden tour gets a little messy.

Garden Island Chocolate is located on Kauai’s north shore in a rural area near Kilauea, adjacent to Banana Joe’s Fruit Stand. You can buy lots of chocolate, fruits and other Hawaiian souvenirs here. Be sure to cross the parking lot to Kauai Mini-Golf. It’s so much more than a mini-golf, but a mini botanical garden as well. Enjoy a massive shave ice, a must while in Hawaii, and pick up some gardening goodies in the gift shop.

Garden Island Chocolate is one of several places on Kauai to learn about growing cacao trees and the process of making chocolate. The National Tropical Botanical Garden is one or find other chocolate companies throughout Hawaii here.

If you are a fan of the Rodgers & Hammerstein musical “South Pacific,” you’ll enjoy lunch or dinner, or an overnight stay at the St. Regis Princeville Resort. The movie version was shot here on Hanalei Bay and every room has a view of Mount Makana, known in the show as Bali Hai.

Another reason to visit the St. Regis is its replica of a native forest garden. To see some of these plants, you would have to climb nearly 3,000 feet up Mount Makana to the Limahuli Garden, a branch of the National Botanical Garden.
—–