As you plan your next vacation, think flowers and plan it around a flower festival. Here are some of the top ones to visit.

First up in the New Year is the Orchid Extravaganza at Longwood Gardens near Philadelphia, from mid-January-mid-March. 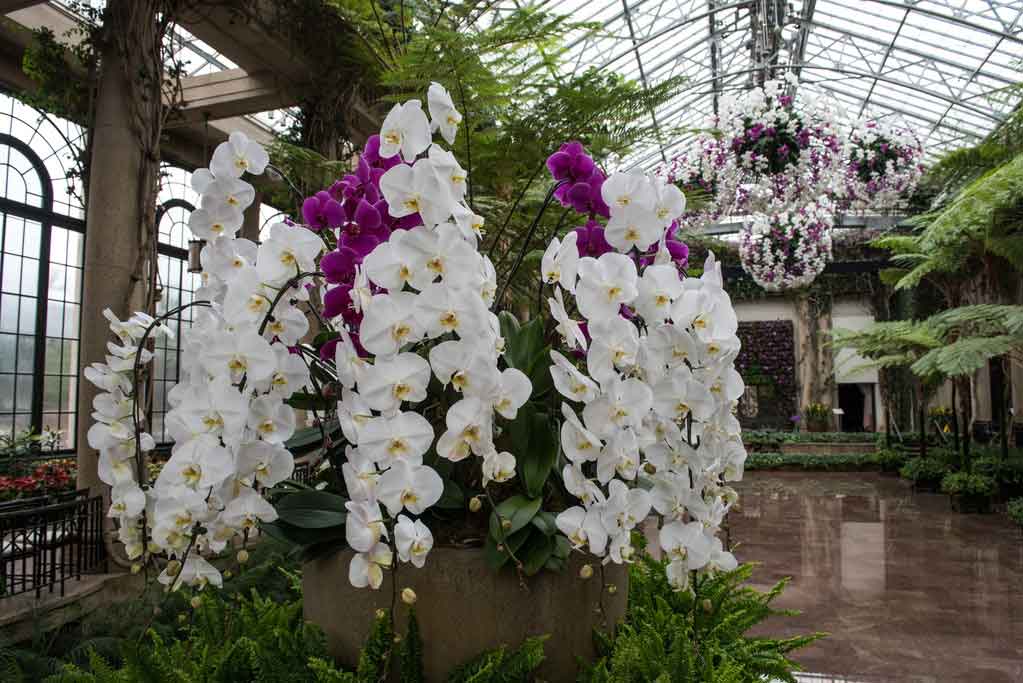 This one-of-a-kind horticultural display features over 4,500 orchids on display, plus concerts, talks, tours, and children’s activities, all tucked away from winter’s chill inside Longwood’s 4-acre conservatory. In the midwest, the Nicholas Conservatory & Gardens in Rockford, IL, is filled with orchids from mid-February through mid-March for the In Full Bloom: The Orchid Exhibit. Hundreds of tropical orchids are creatively displayed in the warm tropical exhibition area, and includes orchid sales and orchid vendors, presentations and workshops.

The Flower Fields in Carlsbad, California, transform the rolling hills north of San Diego into a spectacle of color when over 50 acres of Giant Tecolote ranunculus flowers bloom from early March into early May. You can walk through the fields at your own pace or hop on a tractor for a ride through the flowers. Other displays are a maze of sweet peas, award-winning rose bushes, and greenhouses packed with historic poinsettias and orchids.

If you haven’t been to the National Cherry Blossom Festival in Washington, DC, you must go. 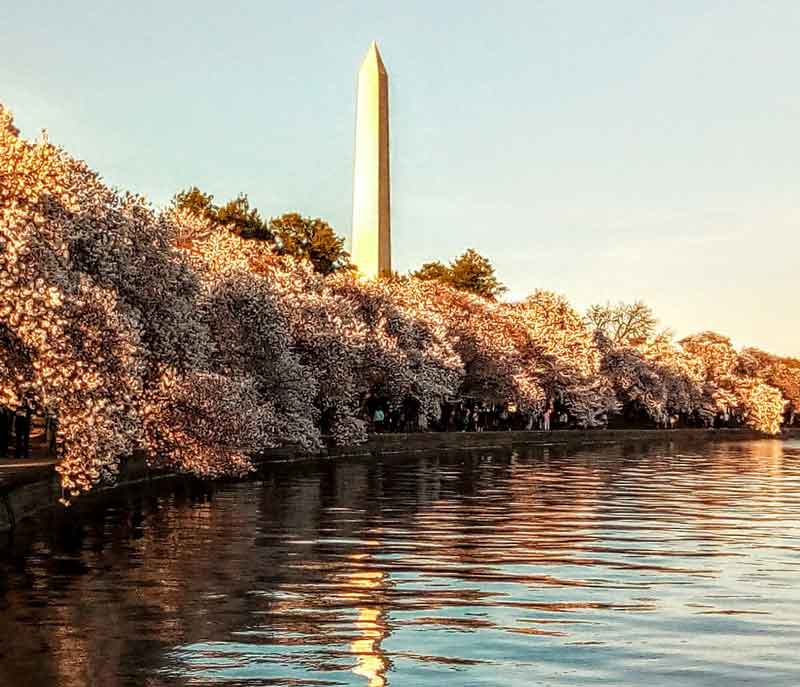 A popular springtime outing in the northwest corner of Washington state is the Skagit Valley Tulip Festival held the month of April. Designed as a driving tour, there is no one place to view the millions of tulips in bloom. Instead, hundreds of tulip fields are scattered across the valley, creating a rainbow of colors on the horizon. A bloom map shows where to stop and enjoy the blooms. Other activities include art shows, concerts, wine and chocolate tastings, and open houses at two of the region’s top tulip growers. 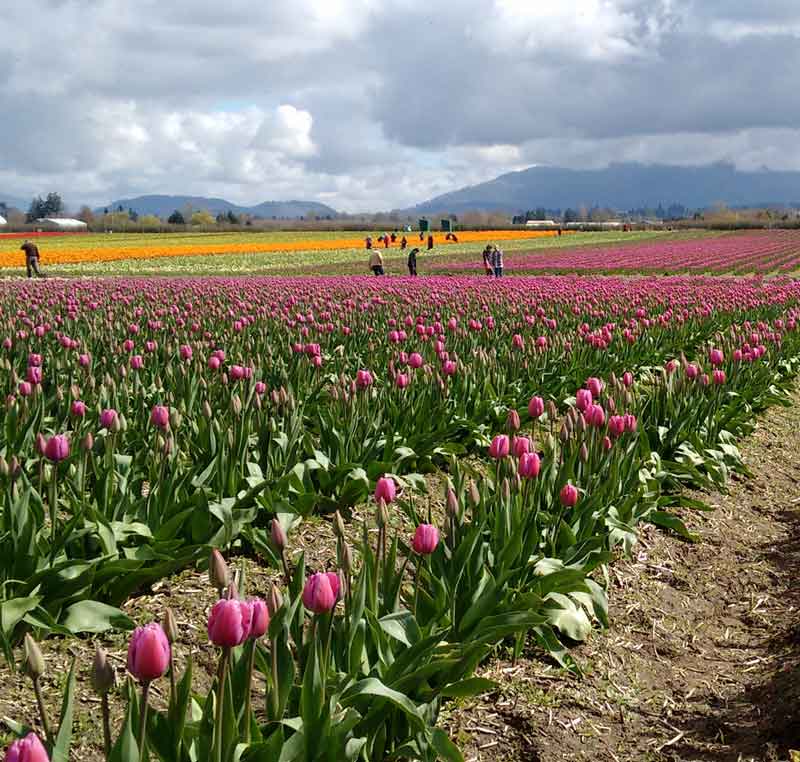 The Rochester Lilac Festival in May in New York, features over 1,200 lilacs in bloom with over 500 varieties, including singles, doubles, white, pink, and purple. Set within the gardens, open fields and rolling hills of the city’s Highland Park – considered to house the largest collection of lilacs in the United States.

The South Carolina Festival of Flowers, in June, started 51 years ago with tours of the show gardens at Park Seed Company and quickly evolved into a community celebration in Greenwood, South Carolina. The main attraction includes 44 unique topiary sculptures placed throughout Uptown Greenwood. The festival has some 30 events that continue throughout the month of June, including gardening seminars.

The Cape Cod Hydrangea Festival in Massachusetts, in mid-July, is a celebration of the region’s iconic blue, pink, and white blooming hydrangea flowers. This 10-day festival’s main attractions are the daily tours of private gardens, each designed and maintained by the individual homeowners. You can also participate in gardening workshops and lectures presented by leading international horticulturalists.

The Sequim Lavender Festival in Washington state is held in mid-July. 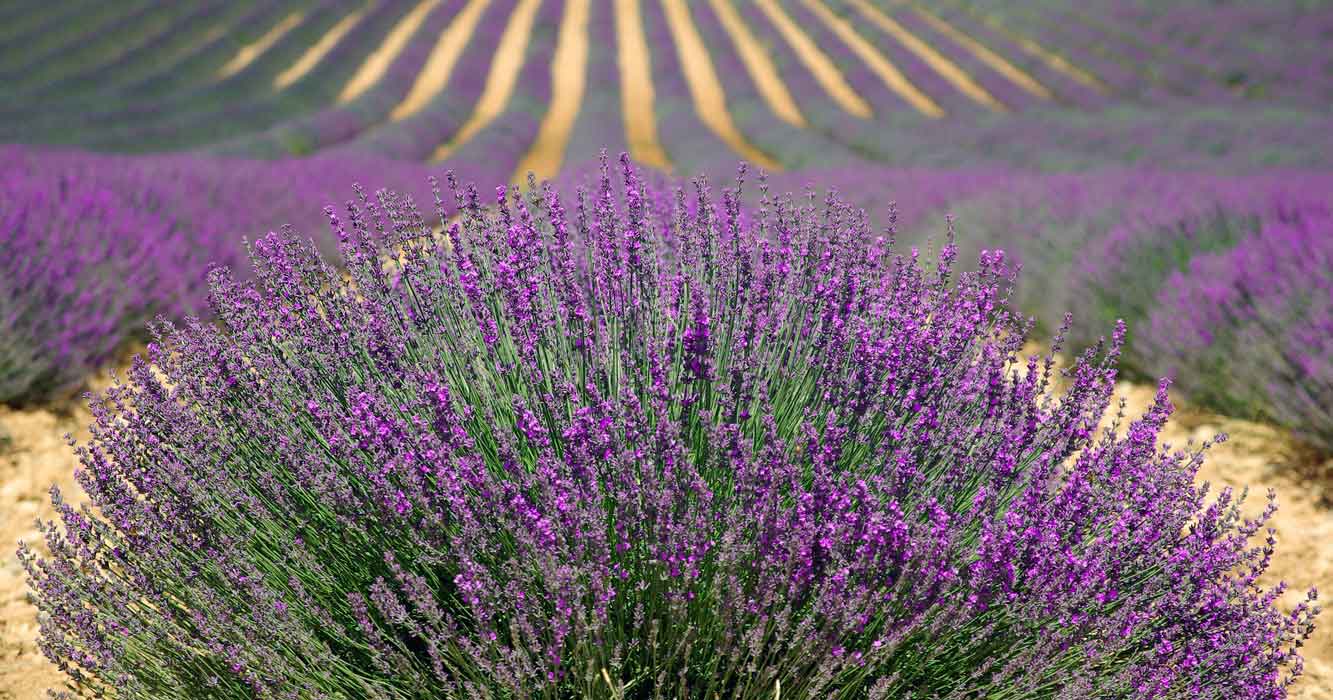 What started as a way to replace fallow dairy pasture with flower fields has become the premier region for growing lavender. Drive the back roads to see dozens of lavender farms and participate in events ranging from lavender picking to craft projects, and then head to the town of Sequim for the festival with more than 150 craft and lavender product booths, live music, and more.

Considered America’s largest garden tour, Garden Walk Buffalo in New York includes over 400 urban gardens open to visit in late July. While the majority are private home gardens, the garden walk also includes trial gardens at the university, neighborhood and church gardens, and the city’s public gardens and parks, all accessible using the garden walk map or via the free Hop-on/Hop-off shuttle.

Not focused on flowers, but definitely worth attending, is the National Heirloom Expo in early September in Santa Rosa, California. 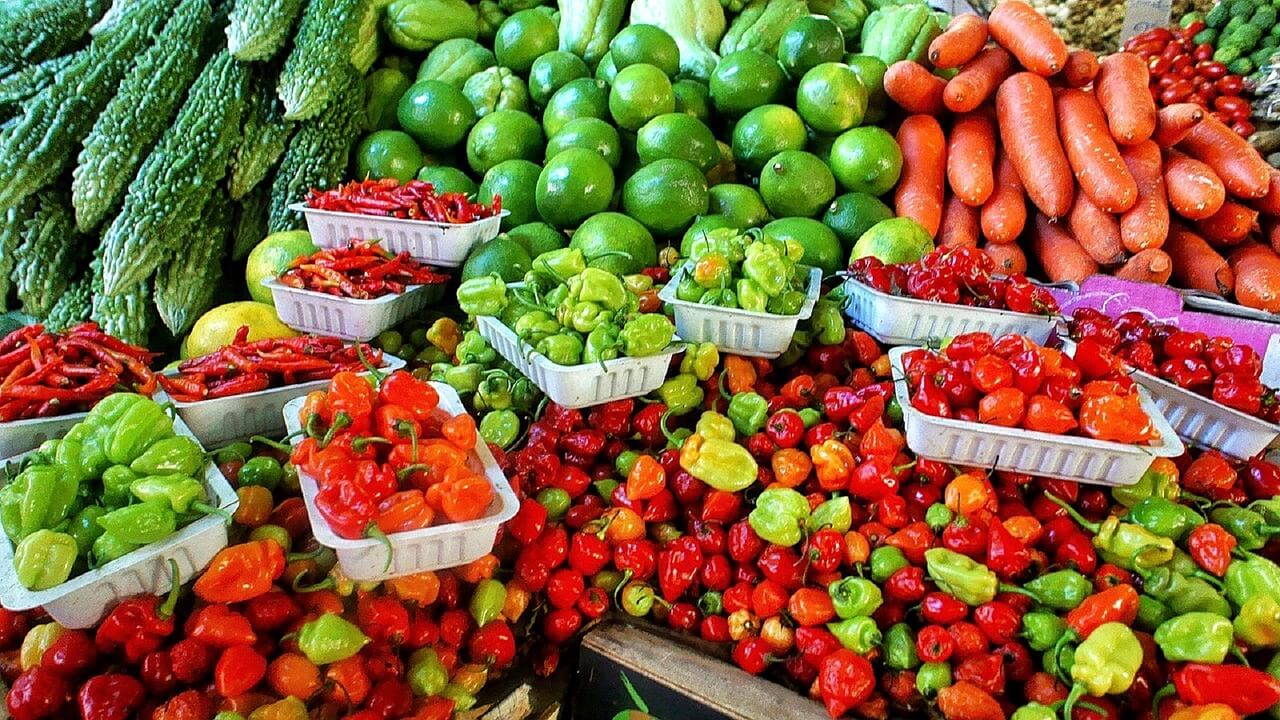 This pure food fair includes the largest display of heirloom produce – over 4,000 varieties – plus some 150 lectures and workshops on horticulture, an heirloom seed exchange, art show, fruit and seed carving demos, kids events, and more. A dahlia show is included in the expo.

From late September through late November, Autumn at the Arboretum at the Dallas Arboretum and Botanical Garden is a showcase of more than 4,500 of fall’s favorite flowers—Chrysanthemums, along with 150,000 other fall blooming plants, plus a Pumpkin Village featuring over 90,000 pumpkins, squash and gourds.

The quiet town of Boothbay, Maine, lights up the Maine coast during the holiday season with Gardens Aglow at the Coastal Maine Botanical Gardens from mid-November through December. 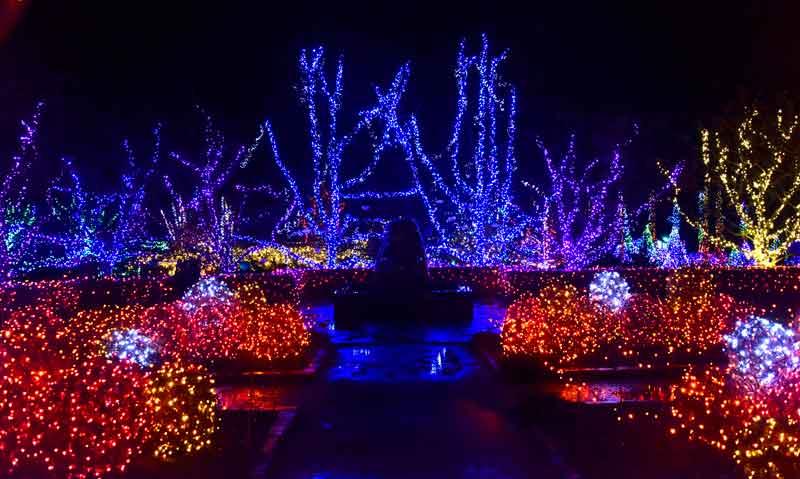 After a two-month process of stringing 66 miles of lights with 650,000 LED bulbs and wrapping 300 trees, the gardens shine brightly during the holiday nights.

There are a number of city festivals themed after flowers.

Wilmington, North Carolina, hosts the North Carolina Azalea Festival in April, that includes concerts, fairs, and a parade with an Azalea Queen held when the city’s azaleas are in bloom.

The Bluebonnet Festival in Burnet, Texas, in April is a good time to have a party when this state flower of Texas is in bloom.

The California Poppy Festival in Lancaster, California, in late April, is a celebration when the region’s poppies bloom. 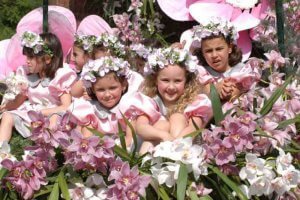 Traveling overseas? Visit the Madeira Flower Festival in Portugal, in May, highlighted with dozens of floats decorated for the Flower Parade, and Madeiran artists building unforgettable floral carpets strategically placed in the streets of the town.

Holland, Michigan, hosts Tulip Time, in May, where you can see thousands of tulips on display (orange colored for 2019) and be treated to entertainment with Dutch dancers, a Dutch market, and three parades.

The Portland Rose Festival in Oregon in late May to early June is a city-wide festival that includes a rose show with over 4,000 blooms and the Grand Floral Parade with floats made with flowers.

Beverly Hurley is the editor of Triangle Gardener magazine – www.trianglegardener.com and www.GardenDestinations.com. When she is not gardening, she loves to travel.