Folks in Denver like to say their city has two seasons: Summer and winter. Either one can occur at any time. With such wild swings in temperature—what does this mean for gardeners?

Technically speaking, Denver has a semi-arid continental climate, also known as a steppe climate. Without an abundance of precipitation, it’s something of a tough go for plants, as well as for those who take care of them. Undeterred, the people of Denver have created a horticultural oasis in the heart of their city – the Denver Botanic Gardens.

At 24-acres, the Denver Botanic Gardens at York Street feel much larger, primarily because it encompasses 50 distinct smaller gardens laid out in five core themes: Gardens of the West, Internationally Inspired Gardens, Ornamental Gardens, Shady Gardens, and Water Gardens.  You will also find North America’s largest collection of plants from cold temperate climates in the gardens.

Using the map of the gardens, one of the first gardens you will encounter after passing through the Visitor Center & Gift Shop is the Crossroads Garden. Prominent here are the yuccas, including the beaked yucca, Yucca rostrata. In a good breeze, its mop of blue-green leaves wave hypnotically atop its shaggy four-foot trunk. 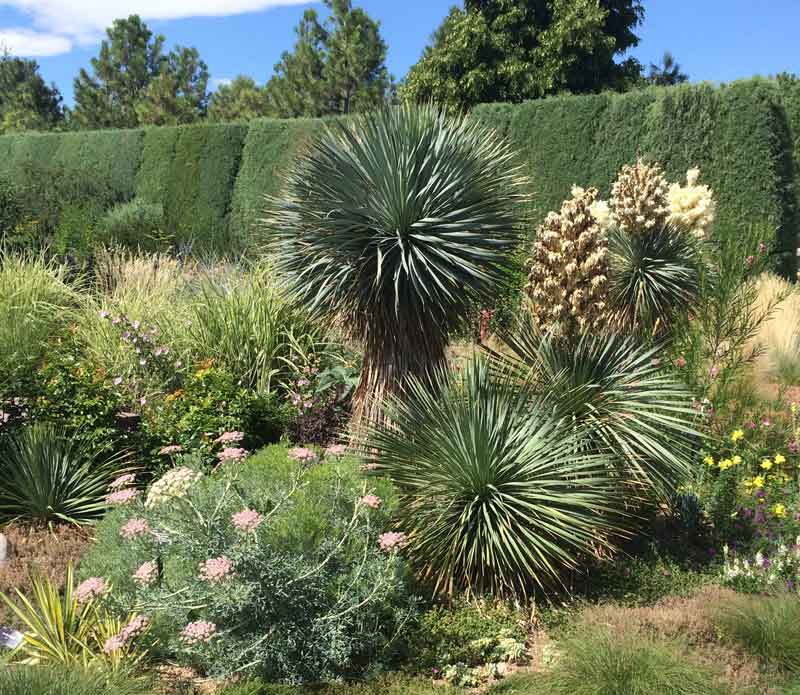 From here, make a left turn to travel clockwise around the gardens for this tour. You’ll pass through the O’Fallon Perennial Walk, inspired by the great perennial borders in Europe. Backed by pruned native junipers, tulips provide the first burst of color in the spring, followed by daylilies, bellflowers, chrysanthemums and pansies through the seasons. Shrubs including boxwood, roses and althea are mixed among the perennials to provide additional color and year-round interest.

Next you’ll pass through the Fragrance Garden with the scents of roses and mock orange, and then arrive at The Ellipse. Here, roses, hydrangeas, peonies and delphiniums surround a sunken water feature with the Chihuly sculpture “Colorado” at its center. Go back through the Fragrance Garden and turn left toward the Herb Garden. Culinary and medicinal herbs in use since the Middle Ages invite you to stroke their leaves to release their pungent aromas.

If it’s summertime, by now you might be looking for some shade, a somewhat scarce commodity on the High Plains. Just across from the Herb Garden and adjacent to the Four Towers Pool is the Science Pyramid. Here you can duck indoors for a bit of man-made shade and explore the science behind the garden’s research into the world’s steppe regions stretching from the shortgrass prairies of Colorado and into Eurasia, South Africa and South America. You can also find some of nature’s own shade nearby in the Woodland Mosaic Garden, showcasing plants that tolerate low light levels and highlighting the ecological importance of forests. 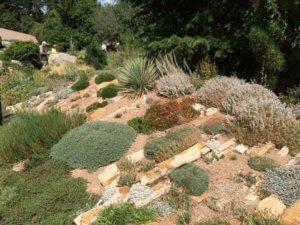 Leaving the Woodland and traveling to the west side of the gardens, you’ll discover the Dryland Mesa. Created in 1986 as the Xeriscape Demonstration Garden, it was the world’s first of its kind and features plants from the arid West and the Mediterranean area. With only fifteen inches of precipitation annually, Denver must use its water wisely, and the cacti, yuccas and other drought-tolerant plants require no supplemental irrigation.

In the southwest corner lies the Rock Alpine Garden, with more than 2300 plant species from around the world. Through the use of different exposures to the sun, as well as various soil types, this garden showcases more than twenty distinct micro-habitats for plants, ranging from mountain peaks to high deserts.

Continue to the northwest section of the gardens for the Japanese Garden, one of the Internationally Inspired Gardens. A traditional stroll garden, it features 130 “character” pines transplanted from the foothills of the Rockies. These naturally stunted and twisted Ponderosa pines mimic the shapes of meticulously pruned Japanese black pines.

On your way back to the entrance, you will pass the Monet Pool with its waterlilies and other aquatic plants. Immediately adjacent is the Garden Hive Bistro open for lunch or a snack. Then move on through the Roads Water-Smart Garden, a colorful display of plants grouped according to their water requirements.

By now you’re back at the Visitor Center. If you were moving quickly this tour is a breeze, though it would have taken two to three hours. Unless you are truly pressed for time, it’s better to devote a full day to the Denver Botanic Gardens. This quick tour only scratched the surface of the immense collection and displays found there. 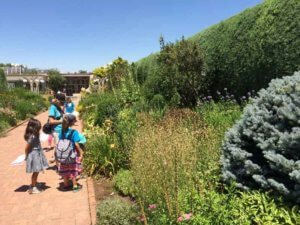 Admission is charged to enter the garden, though there is no admission to the Gift Shop filled with over 10,000 items that have been specially chosen to reflect the Gardens’ core values of sustainability, transformation, diversity and relevance.

The Denver Botanic Gardens at York Street has ongoing art installations year-round, both indoors as well as outside. Stories in Sculpture: Selections from the Walker Art Center Collection in Minneapolis features works by Moore, Nevelson and Noguchi and runs through October 2, 2016.

For a totally different experience, visit Chatfield Farms, a 750-acre preserve, working farm and wildflower garden. A part of the Denver Botanic Gardens, it’s less than fifteen miles from the center of the city.

Denver can be hot in the summer, so visit the gardens early in the day to avoid the heat. If you get there early enough, you might snag a parking space in the covered part of the garage. Weather in the shoulder seasons can be quite variable, but often very pleasant. Even a visit in winter is possible if you hit a spell of mild weather.

Only a few miles from the Botanic Gardens is downtown with the Denver Art Museum and its origami-like building. Also nearby is City Park with the Denver Museum of Nature and Science as well as the Zoo. If you’re traveling there from the garden, you’ll cross Colfax Avenue with many interesting restaurants.

You can’t mention Denver without acknowledging the Rocky Mountains, rearing up out of the plains west of the city. With wildflowers in the spring and summer, aspen foliage in the early fall, skiing, mountain biking, whitewater rafting and historic towns, the opportunities for recreation are virtually unlimited.