These are the Alabama gardens that Coca-Cola built. Originally disguised as a fishing camp.

It was 1917 when Coca-Cola magnate Walter Bellingrath went to his doctor, complaining of a sort of undefined malaise but worried about the national flu epidemic. The doctor told the workaholic he needed to learn how to play. He suggested fishing.

So Bellingrath bought property along the Fowl River about 15 miles southwest of Mobile, Alabama. He built a fishing camp and invited his buddies to spend time with him there. It didn’t take long before they’d get late afternoon visits from Bellingrath’s wife, Bessie.

“And why would Mrs. Bellingrath come down to a fishing camp with no running water, no electricity and no plumbing?” asked Tom McGehee, grandson of that doctor who had advised Bellingrath. McGehee is the museum director at Bellingrath Gardens.

“She was coming down (from Mobile) about five in the afternoon to see if Mr. Bellingrath and his fishing buddies were drinking. She was a teetotaler; he was anything but. And she could never catch him with anything but a brand-new bottle of Coca-Cola.” 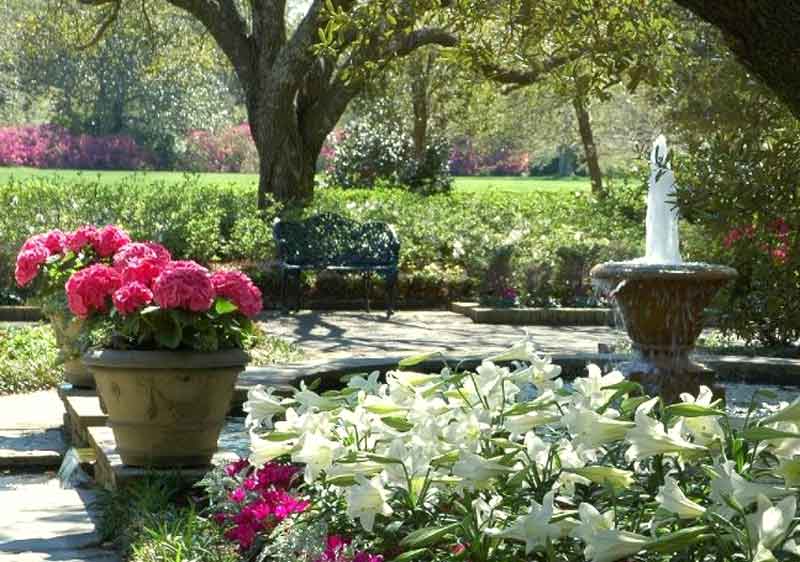 The gardens in spring / Bellingrath Gardens

By then Bellingrath was one of the wealthiest men in Mobile. Miss Bessie was an avid gardener at their Mobile home, known particularly for azaleas. Every spring, neighbors, and friends would drive through the gardens to enjoy the blooms.

Then Miss Bessie decided to spruce up the fishing camp with a few of her extra azaleas. “And things grew from there, as gardens do,” said Sally Ericson, director of marketing and public relations for Bellingrath Gardens.

Add a 1927 tour of European gardens and a professional architect to design a garden at the fishing camp. By 1932 it was outstanding. So Bellingrath put an ad in the Mobile newspaper inviting people to drive out to see the gardens – by then a far cry from a fishing camp – on April 7, 1932. It created a massive traffic jam.

Executive director Bill Barrick said more than 4,000 people came from Mobile “to see what Mr. and Mrs. Bellingrath were up to.”

At first, the gardens were open only in the spring, but in 1934 they were opened year-round. In 1935 the Bellingraths moved permanently from Mobile to the fishing campsite where they’d had a new home built. It was designed to blend in with the landscape and looks deceptively small from the front – but it’s got 15 rooms in more than 10,000 square feet. Much of the home’s furnishings are original. Miss Bessie collected the items in the house, eventually turning to antiques. “She collected with gusto,” Barrick said. 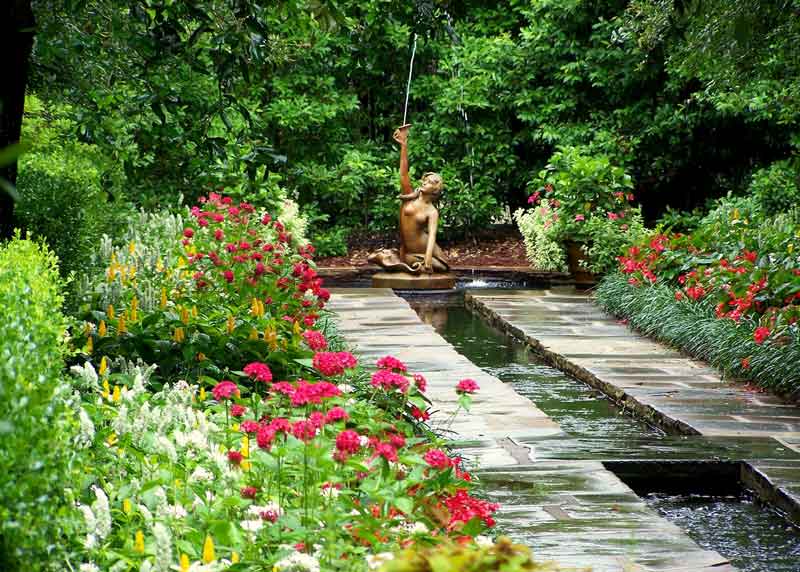 Bellingrath was a penny-pincher; his wife never quibbled about the price. She wrote all the checks out to “cash” so her husband wouldn’t know how much anything cost.

The Bellingraths were friendly folks and extremely gracious hosts. So gracious that strangers walking through the gardens were often invited in for a meal. “Mrs. Bellingrath never knew exactly how many people would be at their dining room table,” Ericson said. “And while they were eating, perfect strangers would be walking by.”

McGehee added, “The gardens were open seven days a week, 365 days a year, the whole time they lived here. I don’t know anybody who would want to build a beautiful home like this and have strangers walking past their doors and windows, but they never cared.”

He added that a visiting niece once commented that visitors to the gardens “were climbing through the bushes, looking in the windows at family members.”

Mrs. Bellingrath died in 1943. In 1950 Bellingrath created a foundation that would care for the house and gardens after his death, as a “fitting and permanent memorial to his wife.” He died in 1955.

Today the home as well as the gardens are open to the public for tours.

Camellias bloom in late winter and early spring, just ahead of the azaleas. They were Bellingrath’s favorite flower.

Then come azaleas, the pride of southern Alabama.

And tulips, which are a surprise here. “Tulips don’t like it down here; it’s too hot for them,” Ericson said. “A lot of them stay right in the pots. And they’re set down in the beds. After about a week they’re switched out for new tulips.”

The rose garden – a favorite spot for marriage proposals – is the late spring/summer star. It, too, has a personal Bellingrath story. 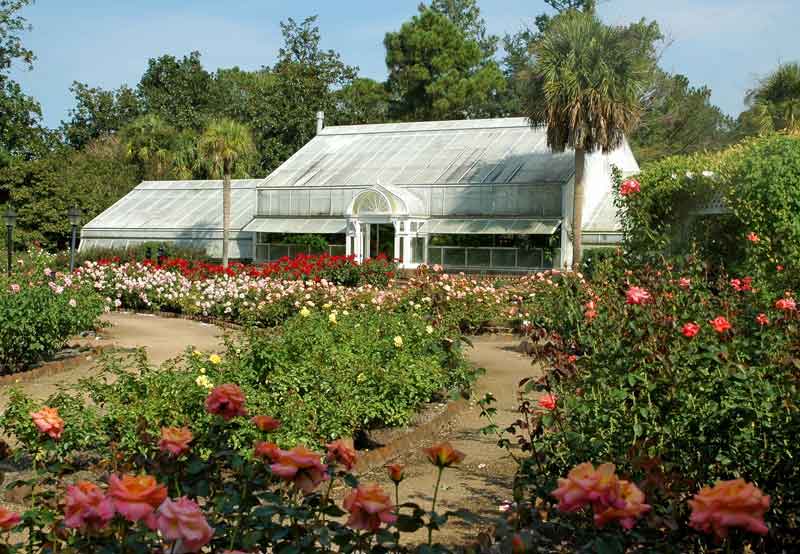 Apparently Bellingrath and the garden’s architect didn’t always see eye to eye, so one day Bellingrath fired the architect. The next day, when a huge shipment of rose plants arrived, there was no plan for them. So Bellingrath took off his Rotary Club pin, showed it to the gardeners, and told them to create a rose garden that looked like the pin.

It’s still there, with the addition of a fountain in 2010 that looks like it was part of the original garden.

Hydrangeas also bloom in the summer. “I especially love the Limelight Hydrangeas in the Gazebo Garden,” Ericson said. “They are so eye-catching and do very well in our climate. They bloom a bit later than the regular hydrangeas.”

Fall brings chrysanthemums in a display Barrick describes as “spectacular.”

And during the holiday season, there’s Magic Christmas in Lights every evening. It includes more than 3 million lights. In addition, the home is decorated for the holidays.

“We have something in bloom almost every day of the year,” Barrick said.

Panini Pete’s – Be sure to try a morning beignet here. The lines outside the eatery tell you this is a for-sure place to check out. This piece of fried dough heaven comes sprinkled with powdered sugar and a side of lemon. Pete swears a little squeeze is the secret to the best beignets anywhere. 102 Dauphin St., Mobile.

Spot of Tea – For breakfast or lunch. The Eggs Cathedral and Bananas Foster French Toast are on the “100 Dishes to Eat in Alabama Before You Die.” People remember the moon pie banana pudding. Be sure to check out their Segway tours of downtown Mobile. 310 Dauphin St., Mobile.

USS Alabama Battleship Memorial Park – The World War II battleship Alabama is the crown jewel of this memorial park dedicated to the military. Tour the “Mighty A” – along with the submarine USS Drum, tanks, pieces of artillery, boats. Food is available in The Galley. 2703 Battleship Parkway, Mobile.

Mobile Carnival Museum – Mobile is the birthplace of America’s Mardi Gras; this history museum chronicles over 300 years of Carnival and Mardi Gras in Mobile. You’ll get a much better understanding of the history if you take the tour. 355 Government St., Mobile.

Estuarium at Dauphin Island Sea Lab – Alabama’s only marine science education and research laboratory, this offers a closer look at the four local ecosystems of coastal Alabama: The Delta, Mobile Bay, the Barrier Islands, and the Gulf of Mexico. 102 Bienville Blvd., Dauphin Island.

WildNative Delta Safari Eco Tour of the Mobile Tensaw Delta – Considered the Amazon of North America, this delta is No. 1 in aquatic biodiversity in the U.S., and on some lists, in the world. View wildlife while an informative guide fills you in on history, geology, ecology. 30841 Five Rivers Blvd., Spanish Fort, Ala.

Elizabeth Granger is a travel writer who lives in Indiana.