The world-famous Bellagio Hotel boasts many attractions, but nothing quite captivates visitors like its Conservatory and Botanical Gardens. Close to the hotel’s lobby, the 14,000-square-foot horticultural paradise is a testament to the company’s commitment to the Earth. A team of talented horticulturists and designers come together during Chinese New Year, spring, summer, fall, and winter to transform the space into a botanical oasis of recycled flowers and plants. 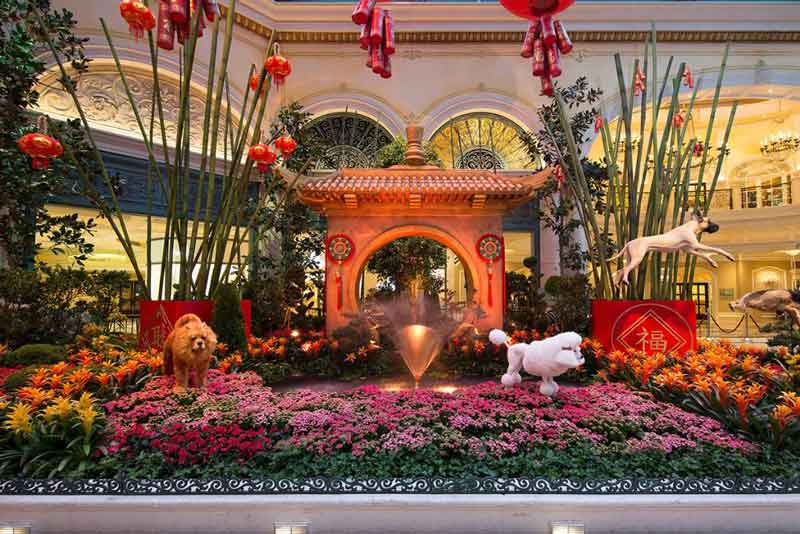 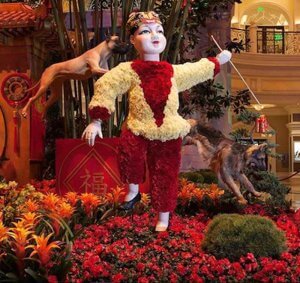 The conservatory’s latest feature celebrates the arrival of the Year of the Dog. Vegas 24 Seven shares the details about the gardens’ new installations, mentioning that there are a total of two cherry blossom trees and 22,000 flowers on display. The area is currently draped in thousands of red roses and yellow forsythia. Around the edges are ding pots that burn incense because they are believed to protect against bad fortune. At the center stands an 18-foot Siberian husky watching over two children as they play with lanterns and fireworks. If those weren’t impressive enough, the exhibit is also lined with four fountains. 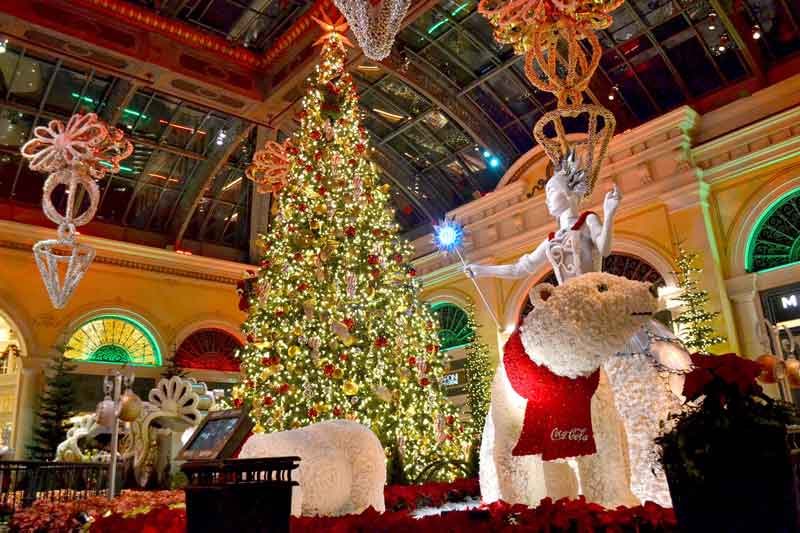 This is just the beginning of the Conservatory’s lineup of impressive garden designs for this year. Who knows what the horticultural staff will come up with for the next three seasons? To give you an idea, Vital Vegas describes Bellagio Conservatory’s previous holiday displays, saying it never fails to impress. Its main attraction was the 42-foot white fir tree, which was brought in all the way from Mt. Shasta. Surrounding the tree and the exhibits were around 28,000 poinsettias, and several other holiday figures made entirely of plants. 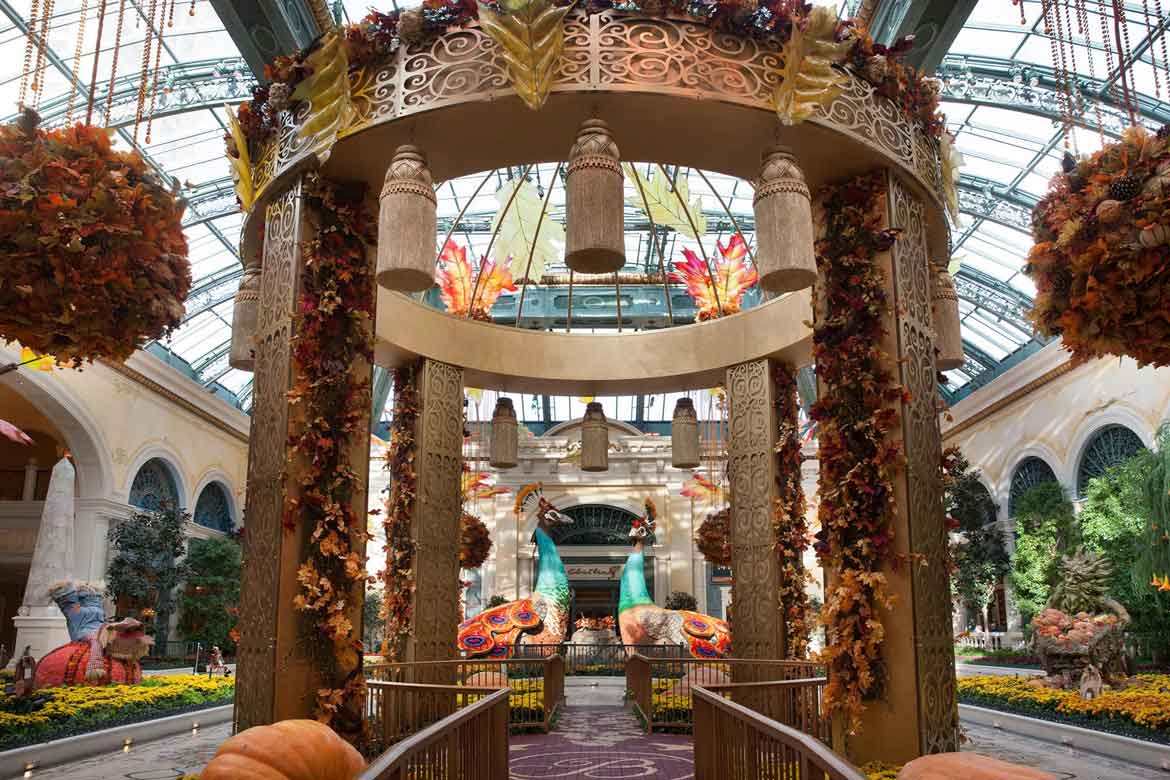 The Bellagio Gardens lay beneath a glass ceiling that rises up 50 feet. The ceiling framework and beams are designed in floral patterns and are made of a green metal of oxidized copper. This conservatory is just one of the many indoor gardens that are worth seeing. To learn more about other beautiful conservatories around the world, you can check out Garden Destinations’ list of gardens under glass.

What Else to See:

The Bellagio has many sights to offer its guests. The Gypsy with a Day Job shared a piece of history of the hotel, citing that its construction took over two years, from May 1996 to October 1998. Since it is known as the first billion dollar resort in the world, the resort’s elegance and atmosphere are something to behold. In fact, it was awarded the AAA Five Diamond honor for 15 continuous years. 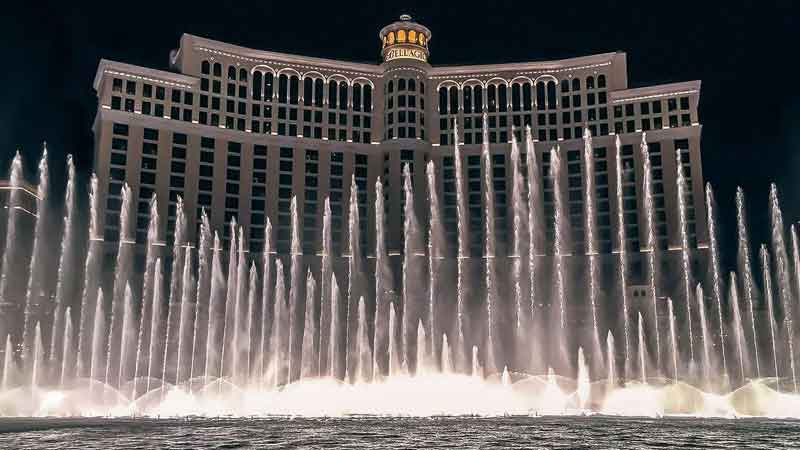 Aside from visiting the conservatory, stay to see one of the Bellagio’s famous fountain shows. Like the gardens, the fountains are open to the public and do not require visitors to pay entrance fees. The casino integrated resort is also renowned as a major fixture on the World Series of Poker Tour and has been featured in many high-profile films including Ocean’s Eleven, Ocean’s Thirteen and Focus, which starred Will Smith, according to Movie Maps. It became such a popular Hollywood filming site because PartyPoker claims that the Bellagio also features one of the most luxurious poker rooms in the world not just on the Strip. The Bellagio’s poker tables feature heavily in both installments of the Ocean’s franchise.

However, to truly appreciate the Bellagio’s grandeur, and more importantly its Conservatory and Botanical Gardens, you must actually visit the place and see for yourself. Just viewing photos on the internet will not do it justice.

5 Must-Visit Gardens In The USA