What Is An Agrihood

Agricultural neighborhoods, affectionately deemed, “Agrihoods,” are residential developments orbiting around a professionally managed farm. Innovation has long been a side effect of trying times and in topsy turvy 2020, this enterprising pursuit for sustainable living found an opening. These communities began cropping up around 2014 and found a significant foothold when Covid-19 spurred millions of Americans to head for the pastoral embrace of suburbia.

Chugging alongside this sweeping migration is the uptick in people prioritizing local food production. According to the United States Department of Agriculture, the number of farmers’ markets in the U.S. tripled from the year 2000 to 2015. In 2009, the USDA launched the Know Your Farmer, Know Your Food initiative, and saw locally-produced food become the fastest-growing market sector.

In short, Americans care more about where food originates and want that location to be close by. How much more local can you get than your own backyard? Agrihood farms, the centerpiece of the development, typically operate under community supported agriculture programming wherein benefactors retrieve fresh produce weekly from their friendly neighborhood farm.

A third important factor adding a feather to the cap of agrihoods everywhere is homebuyer preference for an energy-efficient design. With an emphasis on sustainability, agrihood homes come equipped with sleek energy conservation features such as “net-zero” consumption – the amount of on-site energy provided is equal to the amount of energy used by the building. Think installing solar panels and geothermal, Energy Star appliances, fiber optics, and LEED certification. Nature-loving, going-green foodies are the bread and butter of America’s new agrihoods and they are turning up in record numbers. 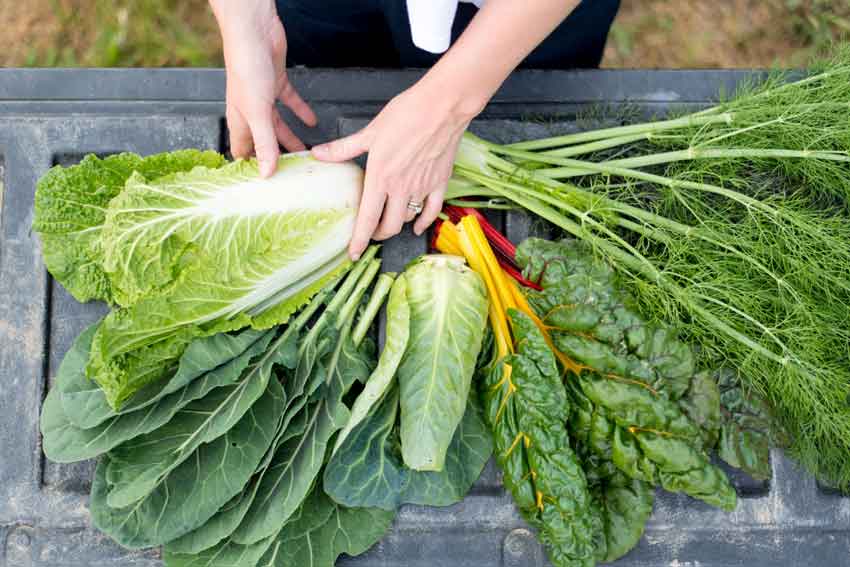 The word “agrihood” was coined in 2014 in Southern California to describe planned communities with a farm at the core of the development. They are meant to connect tenants to the land, even in urban settings, by harboring emphasis around organic and sustainable agriculture. Food is more than fuel in these communities. It is intentional, it is enterprising, it is social. While agrihoods have only stormed the mainstream housing development radar in the last five years or so, they are far from novel in concept.

It is only in recent generations that consumers have become removed from the food production process. The Americans of a couple of centuries ago either grew their own food or bought or traded it from a neighbor up the road. The separation in consumption and production is unique to modern generations. Now, however, with increased concern for environmental sustainability, there is a greater interest in sourcing. Agrihoods, in a way, have brought us full circle to the farm-centered, walkable communities of yore where your farmer was your neighbor and your neighbors were all farmers.

Fortuitously, this seemingly fateful timing has supplied no shortage of developments or occupants. With the surge in telecommuting, homebuyers can work from anywhere. On the canvas of increased flexibility, the data show they are opting for a bucolic backdrop. Not just for environmentally conscious millennials, agrihoods are also highly attractive to families seeking a safe community for their children and retirees eager to maintain socially rich schedules. Residents are rewarded with a peaceful, natural setting, built in amenities, and the reassurance of year-round, fresh, organic food.

Though many agrihoods are multi-generational, some include age-restricted residences called “active adult communities” for those over 55. 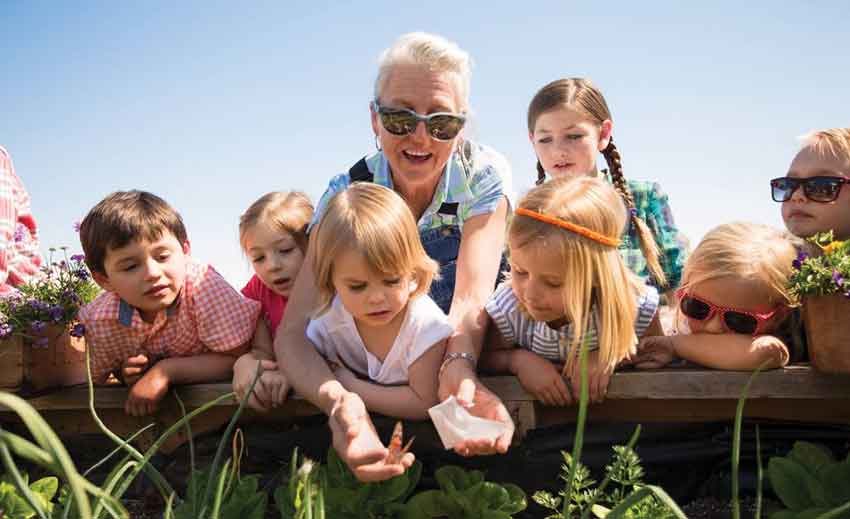 Rancho Mission Viejo in Southern California covers 23,000 acres and is home to several unique residential areas on this former working cattle ranch. Spread throughout the community are Gavilán houses for residents over the age of 55. The community is ripe with clubs for every kind of enthusiast from dancing and pickleball to investment and alternative medicine. It’s akin to a university experience without the long hours of stressful studying but there just might be a club for that, too, if you so desire.

While by definition agrihoods may seem like a rural endeavor, they are as much at home in urban settings as they are in the countryside. Take Sustainability Park, S*Park for short, in Denver, Colorado. Nestled on a city block between 26th and 27th streets, S*Park is the poster child of metro farm-life. Its 15,000 square feet of urban farm and greenhouse are managed by Altius Farms and include a neat and elaborate system of vertical growing that feels uncannily futuristic.

The community as a whole is decidedly multi-use, boasting a restaurant, yoga studio, private park, and bakery right alongside the 90 or so studio, 1, 2, and 3 bedroom condos, and townhomes. The clientele featured on S*Park’s website is as diverse as the space itself. Multi-generational and broadly disciplined, residents include retirees splitting their time between cities, millennials bent on entrepreneurship, and all other age groups in between, working and drawing from urban inspiration. For sustainability-seeking city-dwellers, S*Park and its marriage of dirt and steel is a match made in heaven.

On the other hand, some agrihoods have invested more heavily in attracting the youngest members of society. Communities with unique offerings for children often have learning programs about farming and the environment and even on-site schools. In Grayslake, Illinois, children K-8 can attend The Prairie Crossing Charter School, part of the conservation community, Prairie Crossing. Small, colorful bikes dot the foreground of the school with helmets slung haphazardly over the handlebars. In the Prairie Crossing community, there are 14 parks along with other open sports fields, sandboxes, swings, and climbing structures. Move aside “kid in a candy shop,” and make room for, “environmentally conscious kid with room to run for miles.”

The Olivette Community in North Carolina

In North Carolina, one agrihood is a shining example of greener pastures. Olivette Riverside Community and Farm snuggles on 346 acres of land just north of Asheville along the French Broad River. 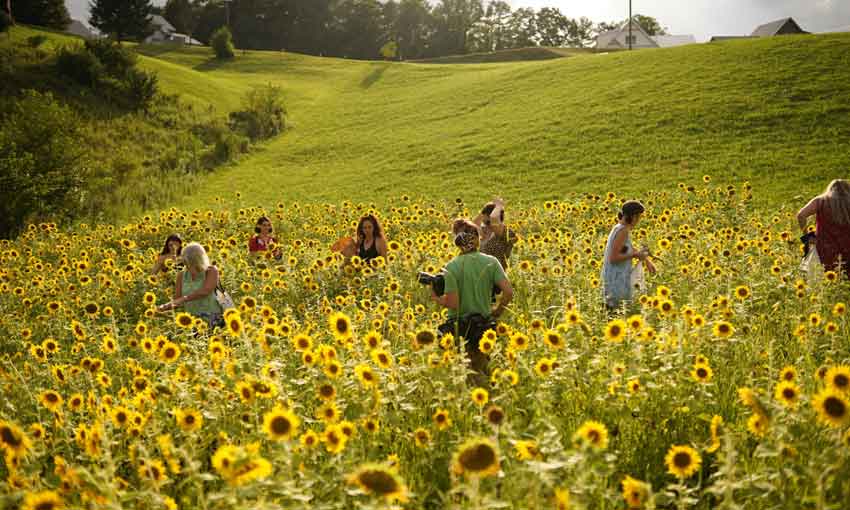 It was founded in 2014 with quintessential agrihood amenities that include fishing, hiking, biking, paddle sports, farm-to-table dinners by the river, and of course, daily fresh produce. After a 2020 marred by lockdown and quarantine, the open spaces, food security, and community of Olivette seem like a welcome exhale.

In an era of supply shortage, public space closure and food insecurity, agrihoods all over are offering the warm reassurance of self-sufficiency and the sweet opportunity for a close-knit community. As exhausted, uncertain, and lonely Americans of 2020 seek stability, agrihoods feel like the best kind of change: simple and back to basics. 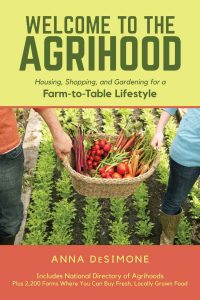 As agrihoods crop up all over the nation (currently there are over one hundred), Anna DeSimone offers a descriptive guidebook, Welcome to the Agrihood: Housing, Shopping and Gardening for a Farm-to-Table Lifestyle (House Publishing 2020). In this book, she instructs on how you can convert your own space, no matter how big or small, into a personal working organic farm or garden.

Her in-depth discussion of local food, backyard, and urban farming, and community-supported agriculture paints farm-to-table living as not just a niche for the few lucky ones in luxurious settings but an opportunity for the masses. She includes a robust directory of farms in each of the fifty states with markets and food hubs and community-supported agriculture programs. Even if plans to relocate to an agrihood aren’t in the cards, DeSimone leads the charge on bringing the agrihood to you. For the sustainability-seeking, fresh produce, home-grown gardeners, or for anyone who loves food (so everyone), this book is groundbreaking. Literally.