A Visit to the U.S. Botanic Garden in Washington, DC

In the shadow of the Capitol dome, the United States Botanic Garden is a national treasure well worth a visit during your next trip to Washington, DC. 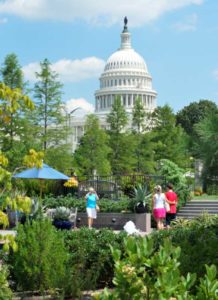 Rooted in our nation’s history, the garden is one of the oldest botanic gardens in North America. George Washington, Thomas Jefferson and James Madison conceived the idea of a national botanical garden for collecting and studying plants. The U.S. Congress granted land in 1820 to the west of the Capitol grounds, where the Columbian Institute for the Promotion of Arts and Sciences operated the garden for nearly two decades.

The current botanic garden has been in continuous operation and open to the public since 1850. It moved to its present location in 1933, a complex located along Independence Avenue bordered by First Street and Third Streets, SW, and is administered by the Architect of the Capitol.

Today, the garden is a living plant museum accredited by the American Association of Museums. The garden includes the Conservatory with two courtyard gardens and 10 garden rooms under glass; a three-acre National Garden, which opened in 2006 and features a garden of mid-Atlantic native plants, a rose garden to honor our national flower and the First Ladies Water Garden. 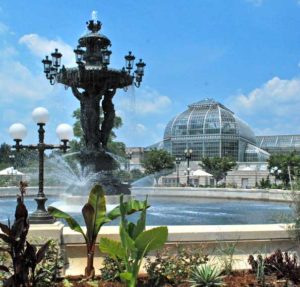 Across the street from the Conservatory is Bartholdi Park, created in 1932 to showcase innovative plant combinations in a variety of styles and design themes. The “Fountain of Light and Water” is the 30-foot tall centerpiece of the park.

Plants are the foundation of the United States Botanic Garden, which maintains over 60,000 specimens, including economic plants, medicinal plants, orchids, carnivorous plants, cacti and succulents, bromeliads, cycads and ferns, and rare and endangered plants. Historic specimens include several that date from the original 1842 founding collection. The garden also serves as a rescue center for plants confiscated at U.S. borders. 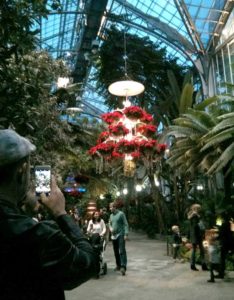 A popular display during the holiday season is Season’s Greenings, open from Thanksgiving Day through the weekend after New Year’s Day. The display features historic landmarks, including the U.S. Capitol, the Washington Monument, and the Lincoln Memorial, all made from plant materials. Young and old alike enjoy the model train show where the trains travel past more buildings made from plant materials. A large display of poinsettia varieties adds holiday décor to the indoor display.

The Conservatory and National Garden are open daily 10am to 5pm, including weekends and holidays. There are extended hours depending on the season and events. Bartholdi Park is open from dawn to dusk every day. Admission to the U.S. Botanic Garden complex is free, though fees are charged for select exhibits and programs. Education is a key component of a visit to the garden. A listing of these seminars and tours, along with additional information on the garden, can be found at usbg.gov. 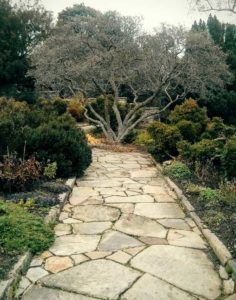 The Washington National Cathedral on the northwest side of the city sits on the 59-acre Cathedral Close, planned by landscape designer Frederick Law Olmstead (who designed New York’s Central Park.) On three of the acres is the Bishop’s Garden. The adjacent Olmsted Woods sits on five acres. Both are serene destinations worth exploring when visiting the cathedral. The Bishop’s Garden is designed as a medieval walled garden. Inside the walls you’ll discover herb gardens, a rose garden, perennial borders and stately trees surrounding a manicured lawn. Down the hill, a statue of George Washington on horseback greets you at the entrance to Olmstead Woods, one of the few old growth forests remaining in the nation’s capital. Visitors can walk the Pilgrim Way path as it winds through the woods. Pick up a self-guided tour brochure of the gardens in the Herb Cottage. Docent tours are scheduled weekly April through October.

Beverly Hurley is the editor of Triangle Gardener magazine in North Carolina. When she isn’t gardening at home, she loves to visit public gardens wherever she travels.