The story of Rochester is rooted in horticulture with gardens and landscapes created by some of the country’s earliest and well known influencers. When the winter white melts into spring, the garden displays in Rochester go all out with a beauty of blooms that easily support the city’s nickname of “Flower City.”

The founder of American landscape architecture, Frederick Law Olmsted, was one of the first to make Rochester a place of beauty. Four of the county parks were designed by Olmsted, including Highland Park in 1888 which is considered the pinnacle of his designs for the city.

The rolling hills of the glacial moraine topography gave Olmsted the opportunity to follow the lay of the land in his Highland Park design. Many of the trees were selected and placed by Olmsted, and today these are some of the oldest trees in the city. Other trees and shrubs came from the director of Boston’s Arnold Arboretum, making Highland Park a near duplication of the plants found in the famed arboretum.

Today, Highland Park is one of the oldest arboretums in the U.S. The Highland Park Conservancy is hosting several events this year to celebrate Frederick Law Olmsted’s 200th birthday in 2022

Most of the park’s trees and shrubs are assembled in collections ranging from horse chestnut, Japanese maple, and magnolia to rhododendron, pine, and the city’s famed lilac collection. 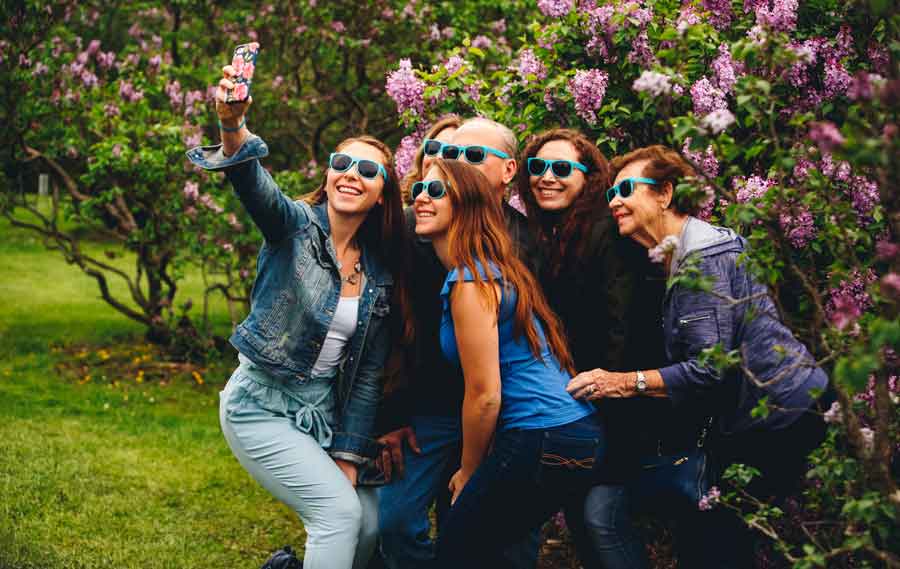 The 1,200 lilac bushes include 500 varieties in colors from dark purple to pure white. The first lilacs were planted in the park in 1892 and for over 100 years the city has been celebrating these blooms that herald the warmer days of spring. Each May, the Rochester Lilac Festival (May 6-22, 2022) draws over half a million visitors from near and far to enjoy the heavenly fragrance of this iconic spring plant.

Highland Park has many other gardens to visit as well. The Lamberton Conservatory was added in 1911 and is an original Lord & Burnam glasshouse completely restored in 2007. Five themed greenhouses make up the conservatory.

The Seasonal Display House changes out the plants five times a year to showcase seasonal flowers.

A tropical greenhouse has epiphytes and ferns plus fiddleleaf fig, hibiscus, staghorn fern, bromeliad, orchids, and a tree Philodendron.

The Tropical Dome is a tropical forest. Bismark palm and Amstel King fig tower above with fan palms, dwarf bananas, crotons, and ferns lining the path. 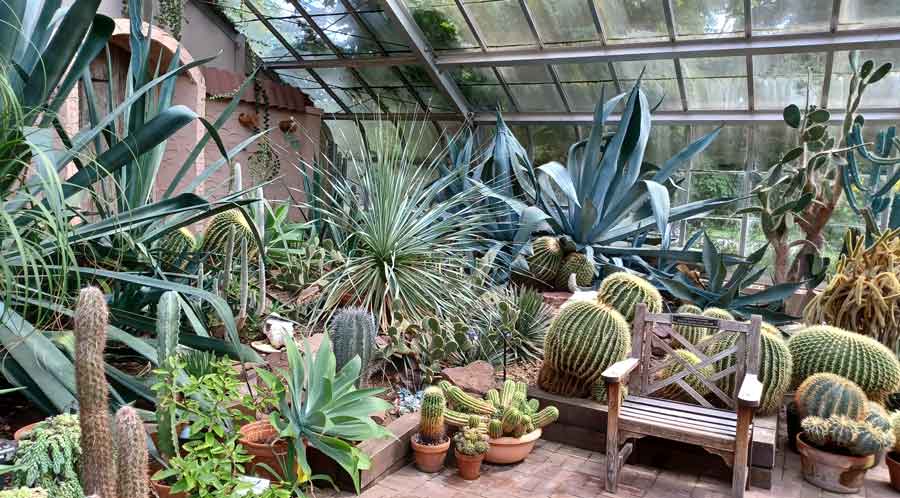 The Desert House is arranged with Old World desert plants on one side of the path and New World desert (plants developed in the Americas) on the other. Euphorbias, agaves, and cactus are just a few of the species here.

A small courtyard garden is an outdoor space where you can sit and enjoy the annuals and perennials.

Other Gardens in Highland Park

Not far from the conservatory is the Poet’s Garden built by the Rochester Garden Club in 1916 to honor the 300th anniversary of Shakespeare’s death. The original plantings honoring the famous bard have been replaced over the years with wildflowers and springtime blooming plants and bulbs.

The Warner Castle near the edge of the park is a former home built in 1864 to look like a castle. Behind it, the Sunken Garden is an interesting feature added in 1930 filled with perennials for both sun and shade.

Highland Park’s pansy bed was started in 1904 and is a popular garden with up to 20,000 plants designed into an oval floral carpet planted in a new pattern each year.

The land to create Highland Park was donated by George Ellwanger and Patrick Barry, and was a section of their world-famous Mount Hope Nurseries that put Rochester on the map in the world of horticulture. Starting in the early 1840s, Ellwanger and Barry teamed together and created one of the largest plant nursery operations in the country. The company was known for its high quality plants and fruit trees, including dwarf fruit trees that they introduced to the gardening world. 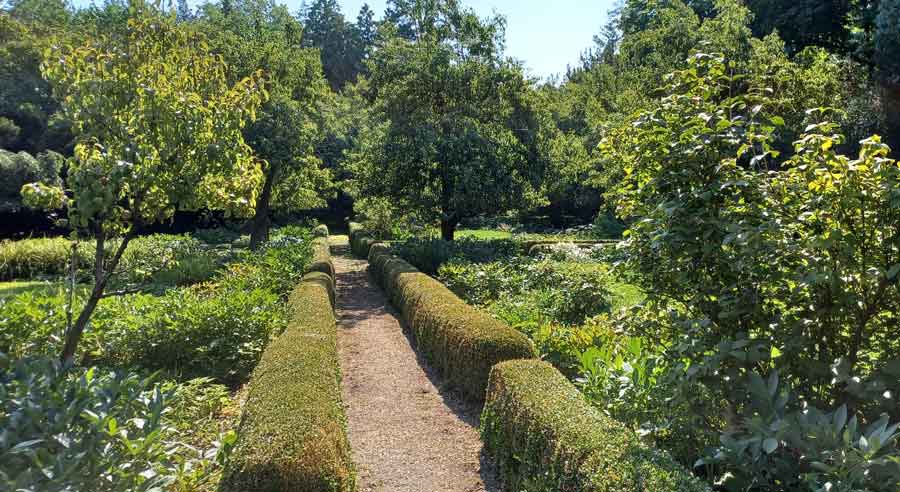 The historic Ellwanger garden is adjacent to the family’s former home where the descendants of George lived until 1982. This “living museum” of plants features an extensive pear orchard – mostly anjou – plus perennials, daffodils, peonies, and roses, including an 1860 Comte de Chambord rose. Other interesting plants are black cohosh, fern leaf peony, meadowsweet, and a hedge of hemlock trees that line the driveway to the former home.

Today, the garden is maintained by the Landmark Society of Western New York and is open during the Lilac Festival in May and in June for Peony Weekend. Other visits are by appointment. Or you can stay in the former family home that is now the Ellwanger Estate Bed & Breakfast and stroll through the gardens on your own schedule. 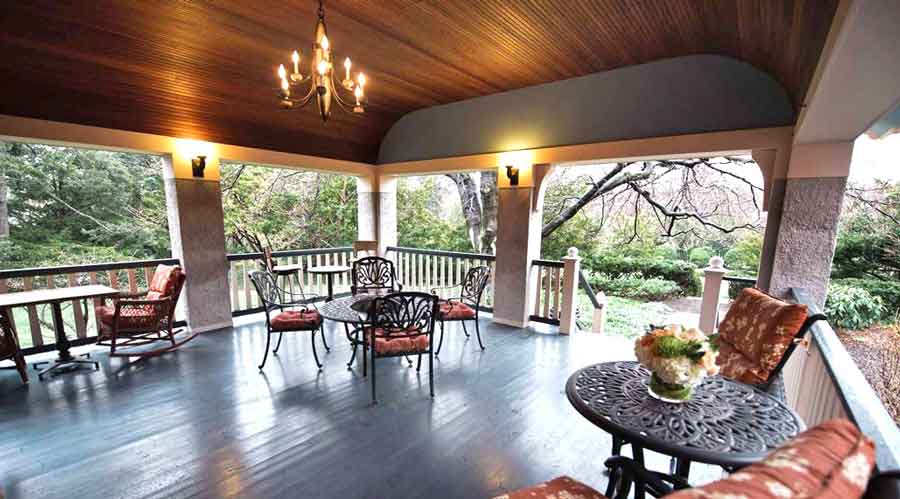 The Ellwanger Estate Bed & Breakfast is a welcoming respite where you can relax in one of the four beautifully appointed guestrooms and linger on the spacious wraparound veranda overlooking the gardens. The four-course breakfast is an event not to miss using locally grown foods and made from scratch recipes. An afternoon and evening tea and coffee with fresh baked goods are offered as a perfect way to stop and relax.

The turn of the 20th century saw another businessman build gardens in Rochester. George Eastman, the pioneer of photography and film, purchased 8.5 acres of farmland on the edge of the city in 1902. Soon after, work began to transform the land into an urban estate that included a working farm, his home, and formal and informal gardens. George turned to some of the top landscape designers of the era to build gardens surrounding the home.

Along the back of the house is the Terrace Garden, the oldest and most formal of the gardens designed from 1902 to 1904. Its dozens of garden beds feature mostly perennials. Two 16th century well heads selected by Eastman flank either side of the garden. Along the back of this garden, the long pergola covered in wisteria is anchored with 100 year old laceleaf Japanese maples and weeping mulberries. This garden is being renovated so some access to it is currently restricted. The adjacent Library Garden was originally a cutting garden for Eastman.

The Rock Garden has a grape covered pergola and a small rock garden, both originally built as a place for Eastman’s guests to relax on the benches under the pergola. Sections of this garden are also under renovation.

The West Garden was added in 1917 and modeled after an English walled garden. Throughout the property are vast expanses of lawn and massive trees including pagoda, katsura, ginkgo, and a European beech already 40 years old when Eastman planted it in 1903.

A tour of the George Eastman Museum includes access to the original house and gardens plus the museum that showcases everything from the evolution of cameras and a wall of paint jars filled with colors to make technicolor film to a theater with a changing schedule of film showings.

The Strong Museum of Play was founded by Margaret Woodbury Strong, one of the largest shareholders of the Eastman Kodak Company. Margaret loved the outdoors and gardening and she also loved collecting vast amounts of dolls, toys, and games. Using her financial resources and her toy collection, she founded the museum that opened in 1982. The multi level building showcases toys through the eras ranging from a 1766 puzzle and a talking doll invented by Thomas Edison in 1890 to toys of the modern era from Barbie to Tinker Toys. The museum encourages kids and adults to play and enjoy the interactive exhibits. Each year the museum inducts toys and games into its National Toy Hall of Fame.

A 2006 expansion added the Dancing Wings Butterfly Garden. Some 600 tropical butterflies flutter in the two-story glass house filled with tropical foliage and flowers. The garden staff releases new butterflies throughout the week. Since there are no butterfly host plants inside the garden, there is no active breeding here. The garden brings in new chrysalis to replace the butterflies that live only 3 to 4 weeks.

The 19th century is brought to life at the Genesee Country Village & Museum. This largest living history museum in New York State is a recreation of a village with 68 historic buildings moved here to interpret life as it was when settlers occupied the land.

Of particular interest to gardeners is the number of gardens included in the recreation. Many of the buildings on the site have beautiful ornamental gardens while others have interesting vegetable gardens, and one offers a Shaker garden with medicinal plants. There are vast expanses of lawn and meadow plus an orchard with everything from apple and quince to grapes, currants, and Cherries.

The Livingston Baccus home from 1850 has a lovely parterre in the backyard with boxwood lined brick paths and masses of annuals and perennials.

There are many gardens at the Rochester Museum & Science Center, including the Mary E. Slifer Memorial Garden. The garden’s design features eight smaller gardens around a large center with each garden themed from medicinal and culinary to fragrance and bee friendly.

The Peace Garden, part of the Peace Garden Trail along this area of the Great Lakes, is adjacent to the 1822 lighthouse. The five small garden sections have interesting signage that tells the story of the War of 1812 in Rochester. Inside the lighthouse is a small, informative museum about the history of the beach area nearby. 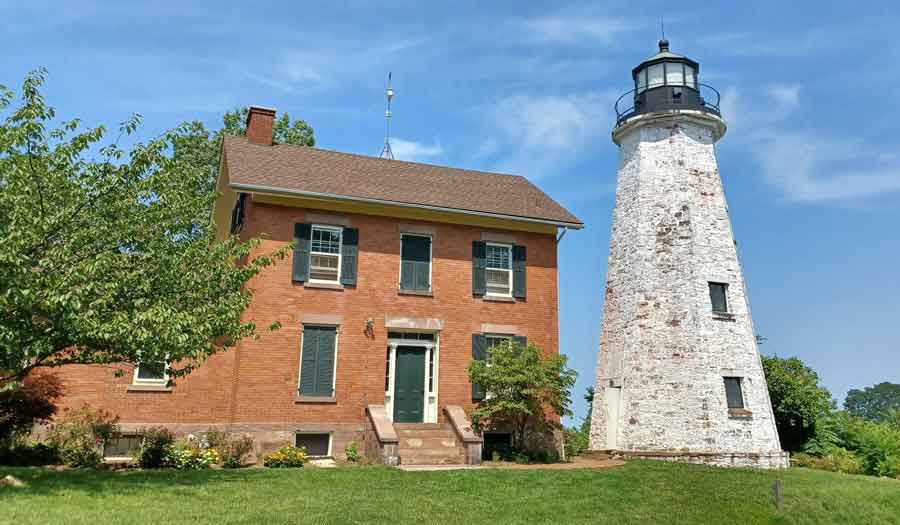 Ontario Beach Park has large stately trees that hug the sandy shore and is a perfect place to relax and watch the sun set across the water.

The Maplewood Rose Garden is an accredited rose garden along the Genesee Riverway Trail in Maplewood Park. This large collection of over 250 cultivars includes some of the best disease resistant and cold hardy roses on the market today. The rose celebration in June includes tours and activities for all ages. 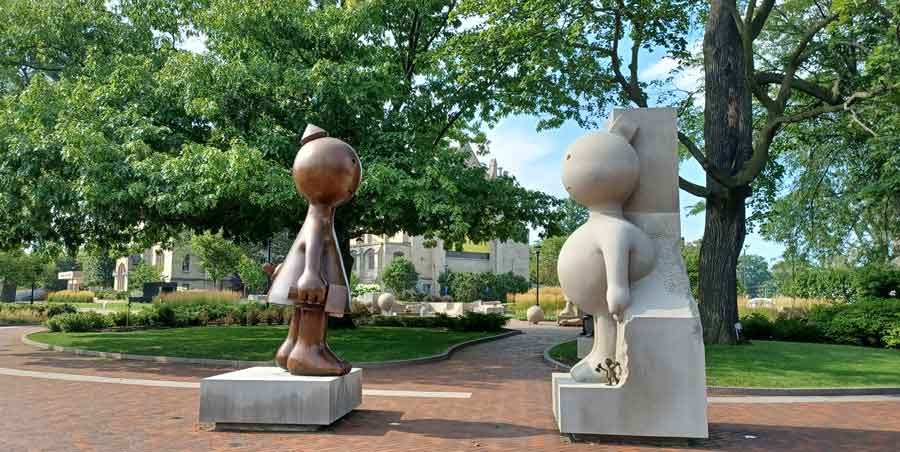 The Centennial Sculpture Park at Memorial Art Gallery combines modern sculpture with plantings of ornamental grasses, yews, hydrangeas, and roses to make for a serene setting to sit and enjoy the surroundings.

When You Go to Rochester

Mount Hope Cemetery is a rugged, glacier carved area of tall hills and steep valleys that has been the final resting place of the city’s residents since 1838. Set in an arboretum of trees, some hundred years old, the cemetery is a forest interspersed with lovely gardens set among some of the graves, including two notables – Susan B. Anthony and Frederick Douglas.

The Erie Canal Cruise on the Sam Patch boat offers a leisurely tour of the famed waterway, including an excursion through one of the famous locks. Along the way, a dense tree lined shore is punctuated with wildflowers and private home docks decorated with colorful plantings of flowers.

Wine and Dine in Rochester

Casa Larga Vineyards and Winery is set on 41 pastoral acres only 20 minutes from downtown and features 40 different wines to taste and enjoy. 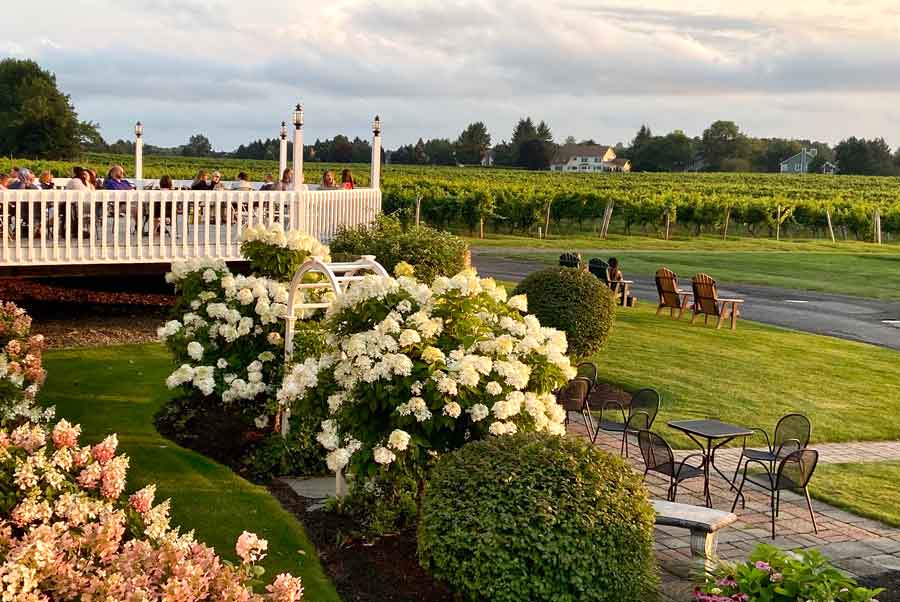 The Patio Party is a popular summer event on select evenings with music and wine pouring set against the backdrop of the lovely vineyards. The Ice Wine Festival in February features Casa Larga’s popular ice wine, the most awarded ice wine in the U.S. The wine uses grapes harvested after the temperature drops below 17 degrees for at least 24 hours. 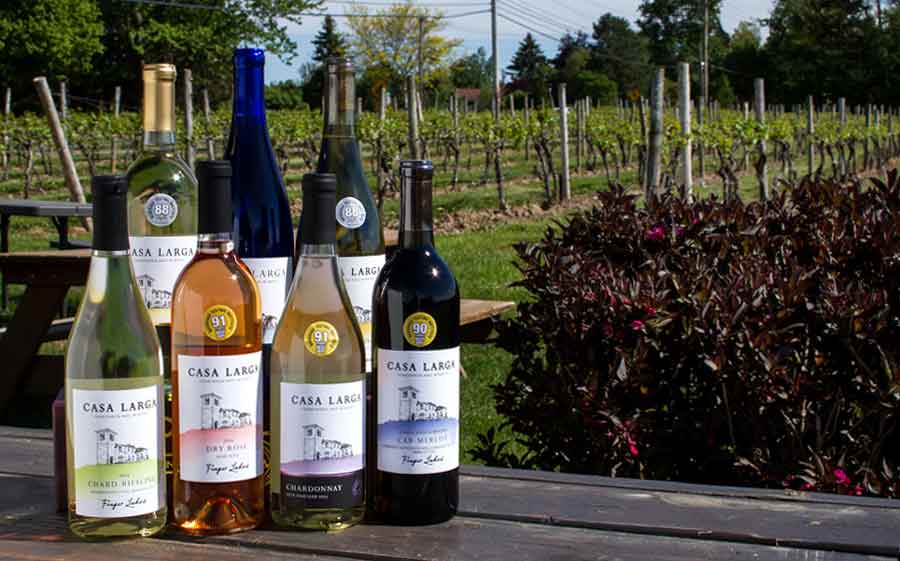 Casa Larga is also the official winery of the Lilac Festival and features a limited edition wine created to celebrate the event.

Rochester offers a range of dining venues, including Mercantile on Main with its food hall, Native Rochester serving up locally sourced cuisine, and the Open Face cafe with hand-crafted sandwiches, soups, and salads at the George Eastman Museum.

You can discover more about Rochester at visitrochester.com.